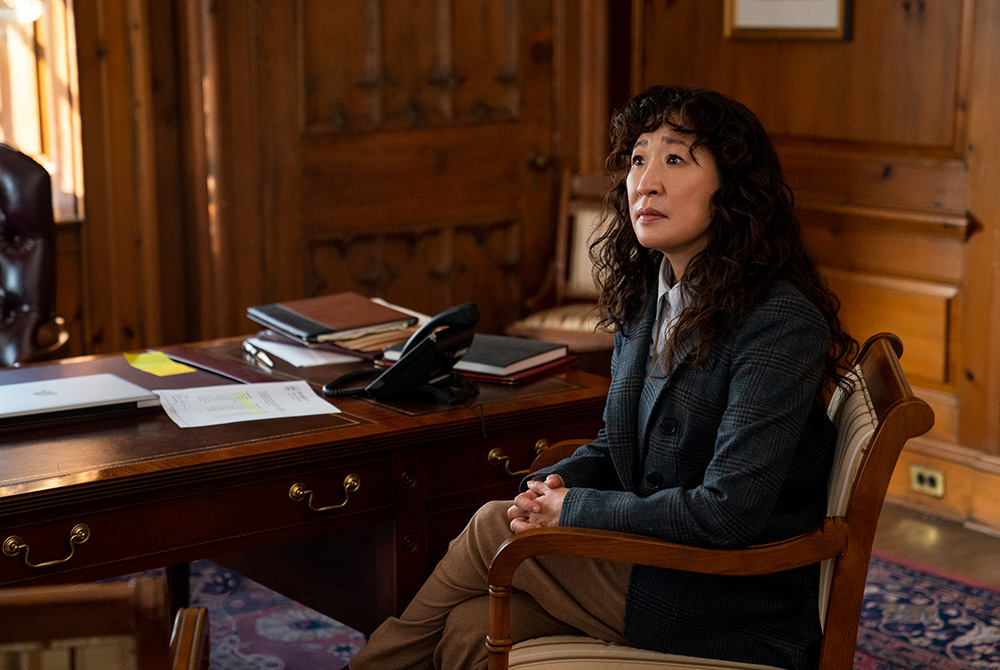 By the second episode of Netflix's new series "The Chair," I suppose you could say, I was triggered.

The series stars Sandra Oh as Dr. Ji-Yoon Kim, an English professor at the fictional Pembroke University, an elite, New England institution, and begins on her first day as the chair of the department — the first woman and, presumably, person of color to hold the position.

Oh, along with characters like Nana Mensah's Yazmin "Yaz" McKay and Holland Taylor's Joan Hambling, reminded me so vividly of people I first knew as a graduate student. Throughout the six episodes, I often found myself reliving traumatic microaggressions from well over 10 years ago, remembering many of these instances almost word for word.

For many academics of color, the show will feel almost viscerally familiar.

Oh's position as the department chair is unrealistically depicted as one that wields power and prestige that will ultimately result in measurable impact. In reality, it's more of a middle-management position that requires balancing the competing needs of faculty and students with those of senior administrators. Too often, faculty and students want more resources and money for hiring and programming, while senior administrators want new and innovative ways to cut costs. (There have already been excellent analyses of the intersectional dynamics Ji-Yoon Kim faces as a Korean American woman at a not just predominantly, but overwhelmingly, white institution.)

While I'm always thrilled to see Oh in any film or TV show, it wasn't her character that drew me in, but Yaz and Joan, women who reflected my lived experiences. 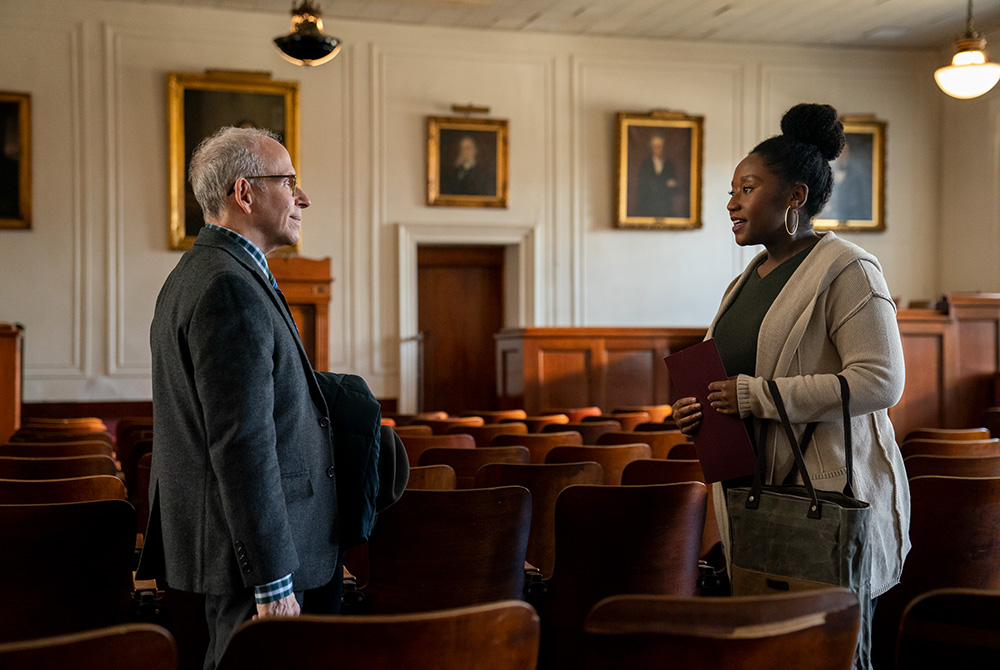 In the second episode, the English department faculty attend a campus-wide party hosted by the dean. Ji-Yoon and Yaz stand out in an ocean of white faces. Ji-Yoon, Yaz and Joan are huddled in a corner talking. When a server passes them carrying a tray of wine glasses, Ji-Yoon quickly takes two and offers one to Yaz (Joan already has a drink). Yaz initially refuses. As a pre-tenure faculty member, she knows she does not have the job security and protections that Joan and Ji-Yoon have, at least on paper, as tenured faculty members. They tease Yaz, with Ji-Yoon encouraging her to drink wine as a way to steel and prepare herself for schmoozing with the provost and dean.

I've been at such parties where I'm constantly on edge because I'm conspicuous by my presence, knowing how everything from my hair to my gestures to my words will be scrutinized. With the slightest misstep, I could risk losing the opportunities available to me and other African Americans because, unlike white people, African Americans do not have the luxury of being seen as individuals, inside and outside of academic spaces. We are always seen as a collective, despite existing across wide-ranging ideological and religious spectrums. As a result, any mistake made by one African American woman, man or child creates assumptions and consequences all must bear.

Conversely, when one of us succeeds, we are viewed as exceptional. Our successes are not transferable like our mistakes. These experiences are exhausting and rarely, if ever, yield the kind of career advancing results that make such an experience worthwhile. Yet, if I chose to stay home, and spare myself the pressure of such a tense environment, I would have been equally conspicuous by my absence and subject to all kinds of labels and perceptions rooted in the racism that exudes from liberal, white spaces.

I was surprised by how much I related to Joan — a white woman and member of Pembroke's faculty for more than 30 years. She's high-salaried with low course enrollments, and the dean wants her to retire. Throughout her years, she never applied for promotion to full professor because like so many women, she took on a disproportional amount of departmental service such as committee work, at the expense of her research. The dean orders Ji-Yoon to convince her to take Pembroke's retirement package. 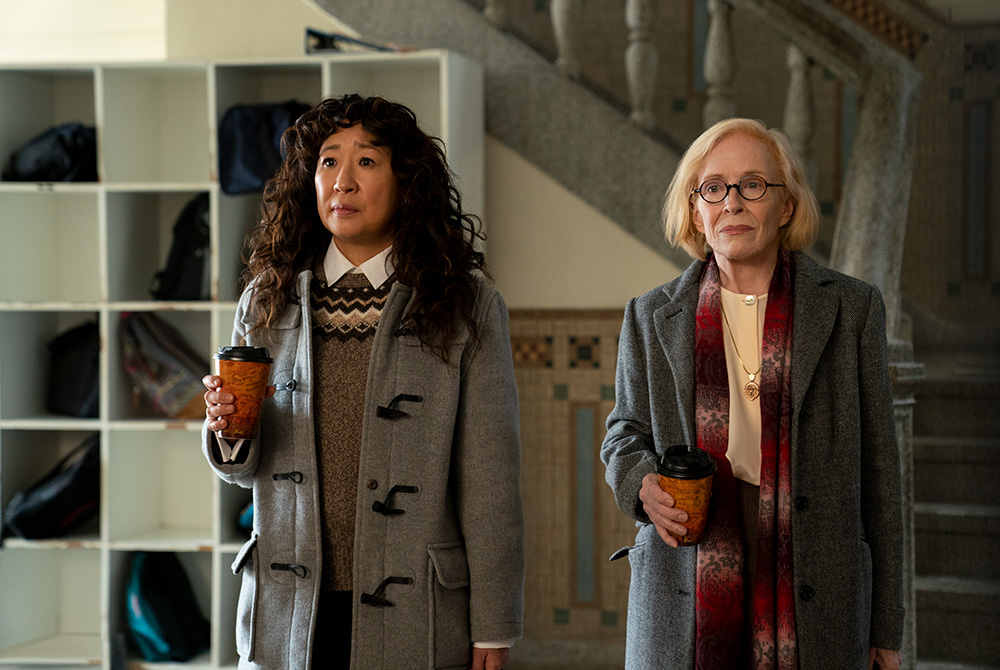 In an effort to negotiate the competing interests of the dean and a colleague she considers a friend, Ji-Yoon advises Joan to give serious consideration to her teaching evaluations. Joan refuses and tells Ji-Yoon she will not treat students as mere consumers. The evaluations show that students find Joan's classes dull and boring. They think Chaucer and The Canterbury Tales are even more dull and boring.

Yet what struck me about Joan is that she hasn't lost her passion for her subject. Rather, she's lost an ability to communicate that passion.

In Episode 4 Joan helps someone from IT support relate to Middle English by connecting it to code. When she later goes on a diatribe outside of the library ranting about why Chaucer is better than students think, nearby students ask when her course meets. Joan isn't an ineffective teacher, or past her glory days, she merely forgot how to convey what she views as the power of literature. In her expletive-laden rant outside the library, she became more accessible and authentic to her students.

For multiple semesters, descriptions from students who took one of my sociology courses always contained some variation of the course being "nothing but memorizing stupid definitions." These helped me to understand that I was not truly and authentically communicating to students what I was really doing. Soon after, I made sure my students knew I was teaching them the language of sociology, which could help them think and speak in a sociological way in and outside of academic spaces, as the reasoning behind why I made them memorize so much.

Earlier in that same episode, another "old guard" faculty member passes Joan in the hall and slaps her on the arm with his rolled-up newspaper saying, "You've still got a top-notch rear end." She retorts, "Wish I could say the same for you."

When I was in graduate school, senior women faculty members, with a bemusement that comes with time and wisdom, described spending much of their careers dealing with male colleagues who sexually harassed them on a regular basis. They described having no support or offices on their respective campuses to file complaints and receive redress. They put up with it for years and often decades while developing a professional persona that allowed them to continue with their work. Because of their work, they were taken seriously as scholars; and because of this, women who came along after them were given respect and liberties. I didn't expect this history to be acknowledged, albeit briefly, so early in the show.

"The Chair" isn't perfect. The set decoration and costume design are more of Hollywood's depiction of what a university campus is rather than what it actually looks like. The series also fails to discuss adjuncts and how their undervalued labor keeps universities going.

While it's not technically flawless, the series artfully centers the lived experiences of female professors, especially those of color, and helps white audiences understand the additional burdens placed upon them.

A version of this story appeared in the Oct 1-14, 2021 print issue under the headline: 'The Chair' is 'viscerally familiar'.