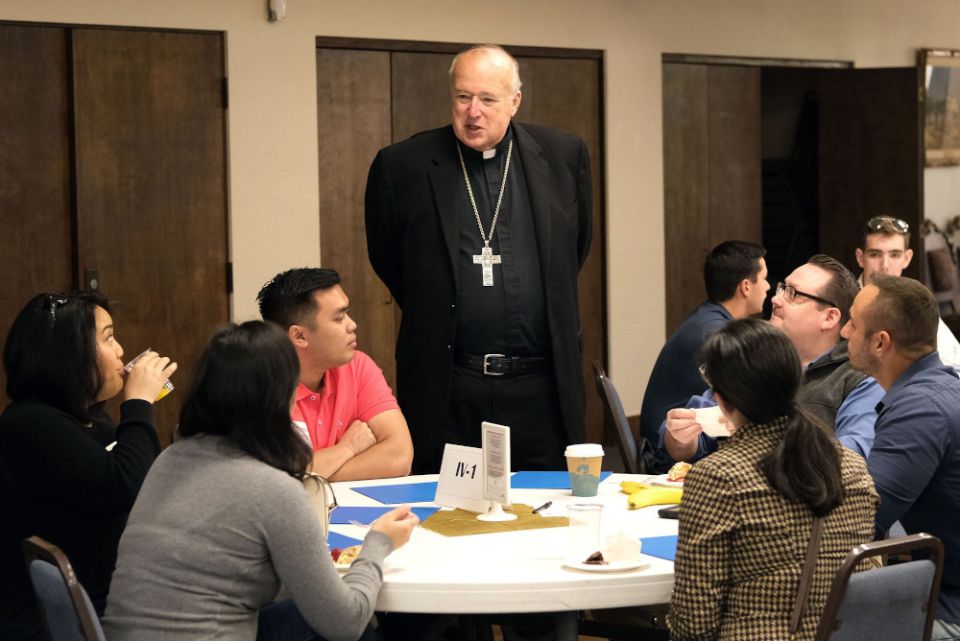 Bishop Robert McElroy of San Diego chats with participants in the closing session of the San Diego Diocese's synod on young adults at Mission San Diego de Alcalá Nov. 9, 2019. He was among 21 new cardinals named by Pope Francis May 29. (CNS/Diocese of San Diego/David Maung)

The very notion of dialogue has atrophied throughout our American culture, as partisan, racial, economic and ideological divisions have undermined civility and the basic proposition that we can learn from a dialogue with those with whom we disagree. As a consequence, the "social space" for dialogue in our political, social and religious lives has shrunk. We are wary of many forums for dialogue that in the past have been fruitful sources for nurturing solidarity and wisdom. At times we despair of the very possibility for dialogue on key questions that are vital for the future of our society, our nation and our world.

For this reason, three concepts that are central to the synodal journey, which the church has embarked upon this year are especially welcome and provide an opportunity to renew dialogue in the United States.

The first of these is the concept of encounter. Pope Francis has stressed that whenever we enter into dialogue, it should be out of a stance of respect rather than a desire to change the other. Encounter proceeds from the recognition of the grace within the life and reflections of our partners in dialogue. It seeks not to overpower or convince, but rather to discover the wisdom that lies in the heart of the other. Francis models the notion of encounter upon the relationship that Jesus has with those whom he encountered on this earth, and with us. It is filled with love and compassion, and the profound recognition that we are all children of the God who is Father of us all.

A second synodal concept that speaks to the repair of our culture of dialogue in the United States is the concept of listening. We must genuinely listen in dialogue, not merely be preparing our rebuttal. Listening is the respect we owe to others in recognition of their equal dignity. Listening flows from a recognition that we have so much to learn. Listening understands that the grace of knowledge and wisdom are not possessions to be hoarded, but gifts to be found even in the most unexpected places and moments.

A third synodal imperative that can help to heal the corrosion of genuine dialogue within the United States is the call to speak honestly and forthrightly in dialogue. We are asked in every synodal conversation to convey our true thoughts, honestly and clearly, without pretense or distortion. Such honesty breeds the genuine exchange of ideas and beliefs that can be the basis for the building of true solidarity in society and in our personal relationships. This kind of honesty — which is forthright, but not hurtful; informative but not overpowering, communicative and not stylized — is essential for dialogue at every level from our family life to our religious communities to our politics and government.

We are asked in every synodal conversation to convey our true thoughts, honestly and clearly, without pretense or distortion.

The mandate for the synodal process points to the centrality of mutual understanding as the goal for substantive and meaningful dialogue. But such dialogue is not easy. It calls us to deepen our conversations with members of our family, and to deepen our compassion as well. The search for mutual understanding calls us to work for unity and solidarity among the religious communities of our country, a goal which we have let slip from our focus in the life of the Church. Perhaps, most importantly of all, we are called to change the tone of dialogue in our nation to banish stridency and division and promote genuine conversation and understanding. The very rawness of our political culture in this moment makes this goal seem almost impossible.

But the Church's view of dialogue does not admit of defeatism or isolation. It seeks to build upon the interreligious dialogues that have so monumentally contributed to understanding during the past sixty years. It attempts to foster a greater recognition of the graces and the injustice that characterize our nation. It emphasizes the many unifying moments and elements of our society and government. And it focuses upon building a solidarity among all people that is rooted in the fundamental recognition that we have all been graced by God who has given us every blessing that we know in this life. It is in witnessing to that giftedness that we can construct a genuine unity built upon the fundamental disposition of gratitude. And in that unity we can find the surest foundation for the construction of a culture of dialogue and encounter.

Robert McElroy is the sixth bishop of San Diego, installed in 2015. On May 29, Pope Francis announced he will create 21 new cardinals Aug. 27, including McElroy, 68.

The Vatican and Pax Christi International think big on peace

Encountering the Spirit in the symbols of the ancestors