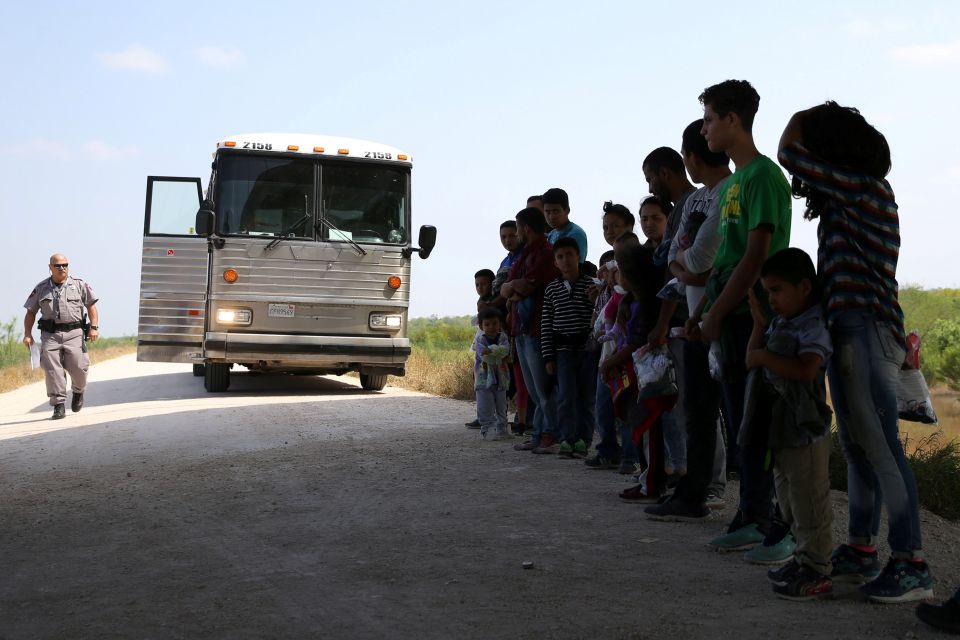 Immigrants turn themselves in to Border Patrol agents April 2, 2018, after illegally crossing the border from Mexico into the U.S., and wait to be transported to processing center near McAllen, Texas. (CNS photo/Loren Elliott, Reuters)

No end is in sight in the emotional and political cruelty inflicted on the thousands of frightened Latin American immigrants seeking safety before and after crossing into the United States. Media coverage of the ongoing southern "zero tolerance" border depravities brought me back 30 years to the spring of 1988 when I was in an orphanage in Tijuana, Mexico, interviewing caretakers of abandoned children. The other story I was after took me a few miles north to the Canyon of the Dead where hundreds of hopeful Central American nightwalkers gathered at sundown after easing onto U.S. soil south of San Diego.

It was the liberal and conscientious mayor of that balmy city, Maureen O'Connor, who was my tour guide to the site and who knew her way along the dirt roads, ravines and bluffs to get to it. With only her driver, she came to the canyon often, sometimes because she saw comforting the disaffected as an act of mercy, other times to offer empathetic encouragements to not give up on naturalization. On this evening Mayor O'Connor, one of 13 children in an Irish Catholic family, gathered with the country-less and homeless while a priest, encircled by what was truly a flock, celebrated a well-attended Mass.

This was in the 1980s, a decade of atrocities in El Salvador that began with a February 17, 1980, letter from Archbishop Oscar Romero pleading with President Jimmy Carter to stop sending weapons and military advisors to the country's governing junta and its ruthless ways.

"I hope that your religious sentiments and your feelings for the defense of human rights will move you to accept my petition, thus avoiding greater bloodshed in this suffering country," he wrote.

Carter, who has long preened as Mr. Pious Peacemaker, did not accept it. Weeks later, on March 24, 1980, Romero was slain during Mass. Several of those behind the kill, as well the slaughter of four U.S. church women months after, were trained by the U.S. Army at Ft. Benning, Georgia, and its School of the Americas, better known as the School of Assassins. Money and weapons kept flowing, assuring that the butchery of the death squads and oppression of reformers would continue until the end of the civil war in 1992.

After Carter came eight years of Ronald Reagan, self-conned into thinking that unless he wiped out leftist guerrillas in Central America the region would become dotted with communist Cubas. Hundreds of millions in military aid poured in, and no questions asked by a pliant Congress. Some 75,000 civilians would be martyred, from Jesuits to illiterate peasants. Uncounted thousands were displaced or forced to flee. A United Nations Truth Commission reported that 85 percent of the killing and torturing in the 12-year war was done by government and U.S. trained soldiers, the rest by guerrillas.

William Blum, long a reliable analyst of America's murderous assaults on countries like El Salvador and the author of Killing Hope: US Military and CIA interventions since World War II, recently blogged:

Those in the U.S. generally opposed to immigration make it a point to declare or imply that the United States does not have any legal or moral obligation to take in these Latinos. This is not true. The United States does indeed have the obligation because many of the immigrants, in addition to fleeing from drug violence, are escaping an economic situation in their homeland directly made hopeless by American interventionist policy.

The list is long of Latin American dictators either funded militarily or enriched personally by U.S. policies, from Augusto Pinochet in Chile to Manuel Noriega of Panama. As part of his long and heroic calls for closing the School of the Americas, Roy Bourgeois reports that 11 dictators have been enrolled in its classrooms going back to the 1940s. Among them was General Efraín Ríos Montt of Guatemala who, according to Amnesty International, oversaw an ongoing bloodbath in 1982 when an estimated 10,000 indigenous people and peasants were killed and 100,000 driven from their homes.

That year Ronald Reagan showed up in Guatemala, and in the pattern of callous stupidity that marked his presidency, hailed Ríos Montt as "a man of great personal integrity." A U.N. commission had a different and accurate view, finding that "acts of genocide" occurred under the general's reign.

In 1999, President Bill Clinton, intent on improving intra-hemispheric relations, stopped at four Central American nations. In Guatemala, where the U.S. had given decades of backing to rightist regimes that oversaw the deaths of 200,000, he scored a first: "[I]t is important that I state clearly that support for military forces and intelligence units which engaged in violence and widespread repression was wrong, and the United States must not repeat that mistake.''

Though Clinton did not use the word apology — best not to get carried away — it was an upgrade from his speech earlier in the day to the National Assembly in El Salvador where he left unsaid any mention of American military being wrong for its complicity in bloodying the nation for a dozen years. Again, no apology.

Given its long addictions either to war making or supporting dictators warring on their subjects, it would be a full-time job for presidents to offer meaningful apologies for bathing the world in blood. Only occasionally do they come mildly close. In May 2016, at the Hiroshima Peace Memorial Park, President Barack Obama spoke of "how easily we learn to justify violence in the name of some higher cause," but offered no apology for the 1945 U.S. atomic bombing of the city that killed 140,000. Four months later, in Vientiane, Laos, he orated about the American pilots who from 1964 to 1973 during the Vietnam war dropped an estimated two million tons of munitions on Laos, including cluster bombs, large numbers of which remain unexploded and are still killing people. "Given our history here," Obama said, "I believe the United States has a moral obligation to help Laos heal." While pledging $90 million to help clear the land of the still-live cluster bombs that continue to kill, no apology was offered.

Now that the White House is home to a self-righteous nationalist who, except for the "Access Hollywood" groping tape, boasts of never apologizing to anyone, it will remain for future presidents to be apologetic to all those Donald Trump has harmed, whether by his serial personal insults or enforcing policies traumatizing asylum-seeking families. Will it happen? Possible but not probable.

Jimmy Carter: Is it Possible to Canonize a Baptist?

CELAM to release statement on Venezuela after hearing from its bishops