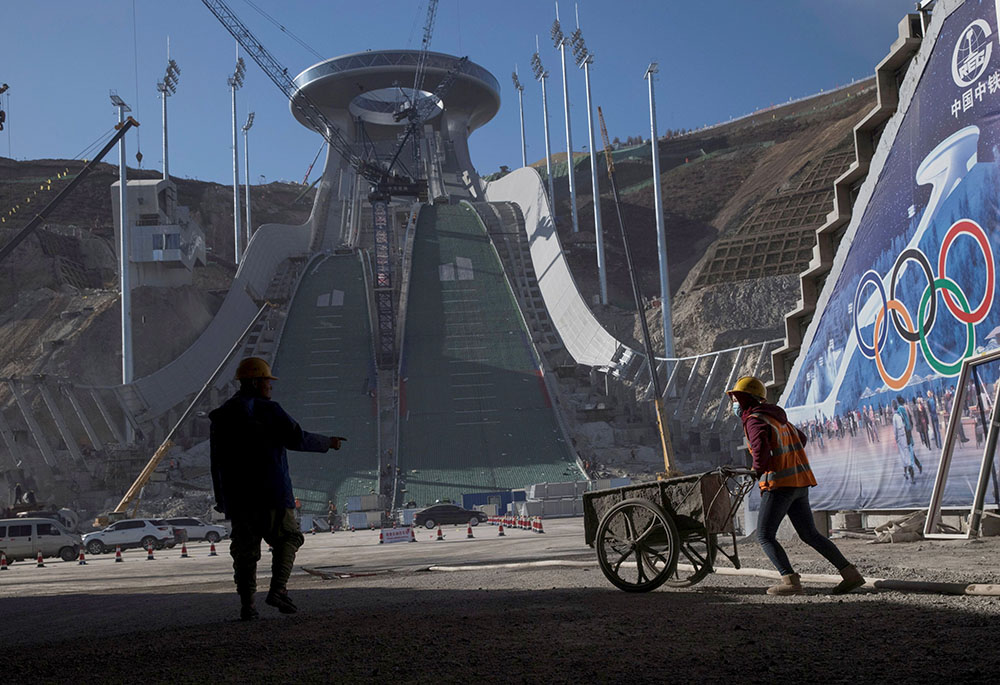 Workers are silhouetted Oct. 29, 2020, at the Thaiwoo ski resort near skiing venues of the 2022 Winter Olympics in Chongli, a popular ski resort town in China. The venue is one of many in the Beijing area that will host the Olympic Winter Games Feb. 4-20. (CNS/Reuters/Thomas Peter)

The opening ceremonies of the Olympics, in all their pageantry, are today. Once again, COVID-19 is playing havoc with another Olympic Games. As happened last summer in Tokyo, in Beijing a "closed loop" has been created to keep the Games completely separate from the ambient city.

Athletes, coaches, media and other accredited participants can only get around in specially designated buses and cars reserved exclusively for their use. There will be no spectators in the stands. The whole thing is a bit surreal, but sporting competitions at this level are always a little surreal, featuring people who have dedicated their entire lives for these few minutes of accomplishment and glory.

This complete isolation of the athletes, coaches and media is likely just fine with the authorities of the Chinese government. They do not have to worry about any athlete expressing support for the persecuted Uyghurs, a Muslim ethnic group in China who are being held in internment camps. No athletes will witness the repression of any political protests that might have been risked by Chinese citizens. For example, democracy advocates from Hong Kong cannot use the Olympic spotlight to call attention to the Chinese government's violations of the promises it made when the former British colony was reunited with China. Authoritarian and totalitarian regimes find isolation useful.

At their best, the Olympics inspire the human spirit. The athletes aim to fulfill the Olympic motto — "Citius, Altius, Fortius" ("Faster, higher, stronger") — and their performances are the central focus of every Olympics. Who can forget Mikaela Shiffrin winning gold four years ago at Pyeongchang, South Korea? Or, before that, the American men's freestyle skiers sweeping the slopestyle competition in Sochi, Russia?

Some of us are old enough to remember the "Miracle on Ice" in 1980, when the U.S. men's hockey team shocked the world by defeating the highly favored Soviet Union in the semifinals and then winning the gold medal against Finland. I was lucky enough to be in the arena when that U.S. hockey team beat Romania, a victory that got them into the semifinal against the Soviets. It was unforgettable.

The inspiration to the human spirit extends beyond the field of competition. Olympic venues are opportunities for architects to spread their wings, too. The National Speed Skating Oval, or Ice Ribbon Arena, is the most daring, and beautiful, new building constructed for these Games. The organizers also repurposed one of the great architectural achievements of the 2008 Beijing Summer Olympics, the Water Cube, used then for swimming but serving now as the venue for curling.

Previous Winters Olympics have also featured significant architectural works, including the Fisht stadium in Sochi; the Richmond Oval in Vancouver, Canada; the Vikingskipet in Hamar, Norway; and the elegant lines of the Makomanai speed skating stadium in Sapporo, Japan. Going back further, many spectators may not have noticed the beautiful architecture of the Stade de Glace in Grenoble, France, in 1968 because they were too busy watching figure skater Peggy Fleming dazzle the judges and the crowds, but it was and is a beautiful building.

Sadly, however, political monsters can put the competition, the dramatic pageantry and architecture to their own sordid ends. The 1936 Winter Olympics in Garmisch-Partenkirchen, Germany, and the Summer Games that same year in Berlin allowed Adolf Hitler to showcase his Reich to the world. While the idea of an Olympic flame has precedents in both ancient and modern times, it was Hitler who introduced the first Olympic torch relay at the 1936 Berlin Games, a dramatic centerpiece of the opening ceremonies still. 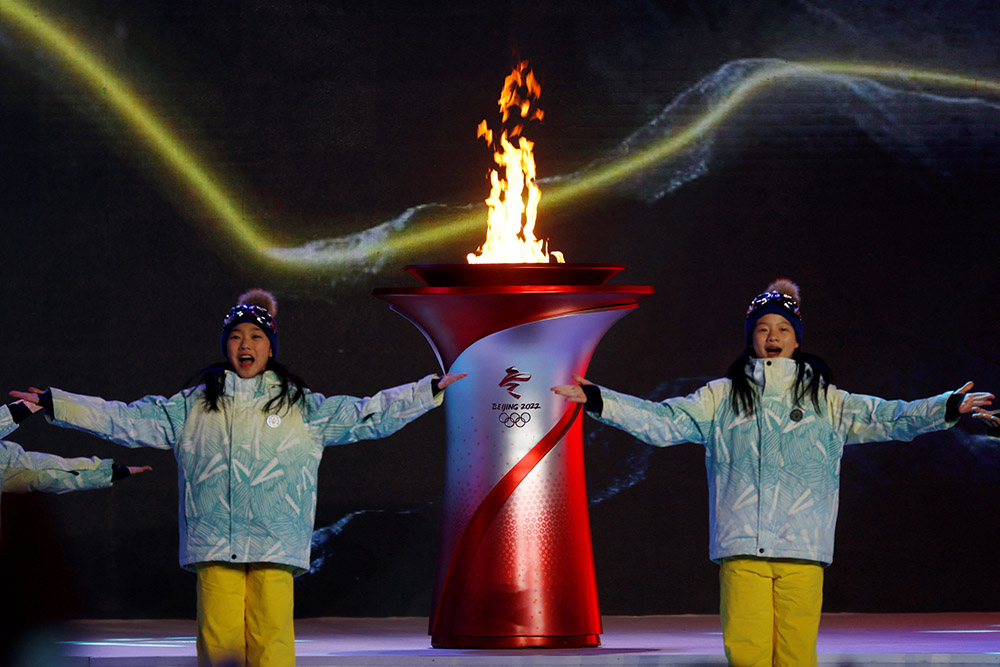 Actors perform next to a cauldron with the Olympic flame during a performance at the end of the torch relay session ahead of the Beijing 2022 Winter Olympics Feb. 2. (CNS/Reuters/Florence Lo)

You can bet that the Chinese autocrat Xi Jinping has considered these precedents. He made himself the center of the regime's celebration of the 100th anniversary of the founding of the Chinese Communist Party last year, as he did in 2019 when the regime celebrated 70 years in power. The image of Xi, standing in the back of a limousine as it emerged from the ancient Forbidden City and turned down Chang'an Street to review the vast assembly of military troops and armor, the adoring crowds and their thoroughly scripted cheers, it was chilling. It put one in mind of Leni Riefsenstahl's movie, "Triumph of the Will," dramatizing the 1934 Nuremberg rally.

The International Olympic Committee has not covered itself in glory. Despite a stated, and repeated, commitment to human rights, the IOC first stonewalled and then refused to meet with the Coalition to End Forced Labor in the Uyghur Region. The group wanted to know if the official Olympic swag had been made using forced labor.

As much as my heart goes out to any athlete who trained for years but then couldn't participate in an Olympics, there are things more important than sports, and opposing forced labor, genocide and efforts to crush democracy are among them.

In a statement of exquisite equivocation, an IOC official said, "While the I.O.C. will continue strengthening its work in relation to labor rights we regret to conclude that your organization and the I.O.C. will not be able to engage in a dialogue this time as a result of differences in approach, including regarding scope, process and confidentiality."

The Biden administration announced a diplomatic boycott of the Games in December. Some athletes are now planning to boycott the opening ceremonies after meeting with delegations from democracy and human rights movements who traveled to qualifying events around the globe in order to make their case directly to the athletes.

The IOC, of course, remembers when the U.S. completely boycotted the Moscow Olympics in 1980 after the Soviets had invaded Afghanistan. The Soviet Union and its allies returned the favor four years later, refusing to send athletes to the Games in Los Angeles. The IOC has insisted it is "neutral" in political matters but that is naive. If human beings are involved, politics are involved. And as much as my heart goes out to any athlete who trained for an event for years but then couldn't participate in an Olympics, there are things more humanly important than sports, and opposing forced labor, genocide and efforts to crush democracy are among them.

The athletes in Beijing, however, did not choose to cooperate with evil the way the IOC did. The athletes' cooperation is remote. And if you, like me, choose to tune in and cheer on Nathan Chen in figure skating and Mikaela Shiffrin when she speeds down the slopes, whatever cooperation with the nefarious Chinese regime our viewership entails is even more remote.

Enjoy the Games, but let's hope the IOC is more scrupulous in the future about the decency of the governments to which it awards the Games or, even better, assign them permanently to a nice, pacific country like Norway.