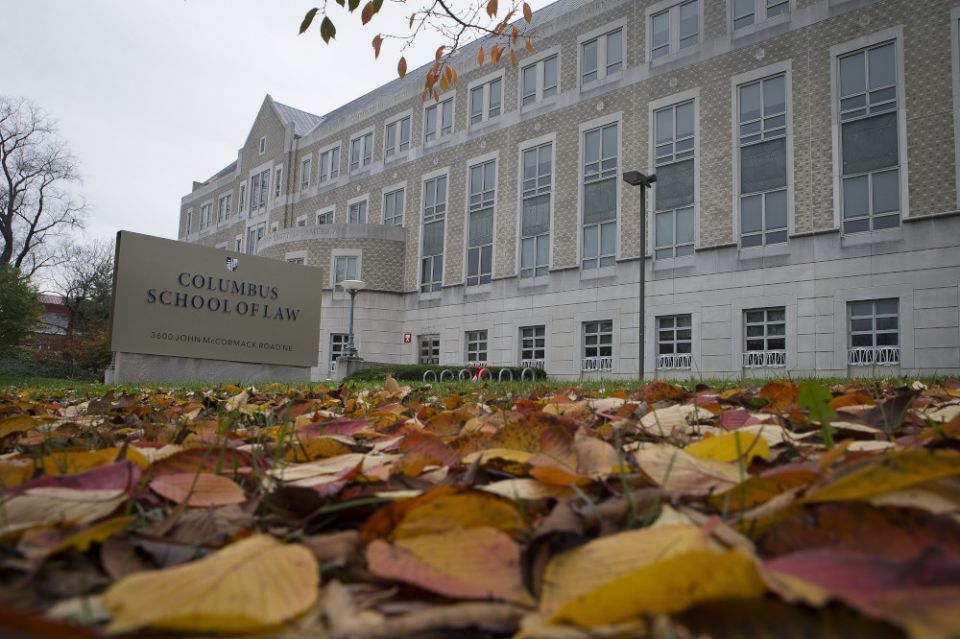 The Catholic University of America's Columbus School of Law in Washington is seen Nov. 13, 2020. (CNS/Tyler Orsburn)

At the Catholic University of America, an icon entitled "Mama" that portrayed a Black Christ — the image also evoked George Floyd, depending on how the viewer engages the painting — cradled by a Black Virgin Mary, was removed from its place outside the law school chapel. It is not clear whether it was stolen — as a previous copy was — or if it was taken down. A university spokesperson did not respond to NCR's request for clarification as to whether the icon was stolen or taken down by the university.

The removal came after the student government passed a resolution calling for the painting to be taken down because it was "divisive." A petition campaign from the Young Americans for Freedom had urged the icon's removal.

"This painting dangerously confuses students about Christ's divinity and perfection, reducing Jesus to a controversial and troubled public figure," said Patrick Reilly, president of the misnamed Cardinal Newman Society. A student interviewed by The Daily Signal called the icon "blasphemous."

"The icon 'Mama' is a pieta depicting Mary and her Son, Jesus Christ. The letters in the halo are Ὁ ὬΝ, which is shorthand in Greek for 'I Am.' The letters are used in icons only in connection with Jesus Christ, the Son of God," a Nov. 24 university statement read. "There are those who would like to see George Floyd as the male figure in the icon. That is not how we read it. The image represents to our community a good-faith attempt to include religious imagery on campus that reflects the universality of the Catholic Church."

In an interview with Sojouners, Kelly Latimore, the artist who created the icons, said, "George Floyd had the imago dei within him, the image of God, as we all do, but it is Christ."

Latimore's observation is deeply true and thoroughly consistent with Catholic theology. "It is no longer I who live, but Christ who lives in me," St. Paul wrote to the Galatians. None of that apparently matters to the student leaders at Catholic University of America, a school that has long celebrated its Catholic identity.

In an interview with The Christian Century, Latimore said, "The common question that people asked was, 'Is it George Floyd or Jesus?' The fact they're asking that question is part of the problem. My answer was yes. This nonanswer frustrated the hell out of a lot of people. Again, it's them trying to protect God, and we can be pretty sure that when we try to protect God, we're creating an idol."

It is the critics, not the artist, who violate the First Commandment, who blaspheme by creating an idol. 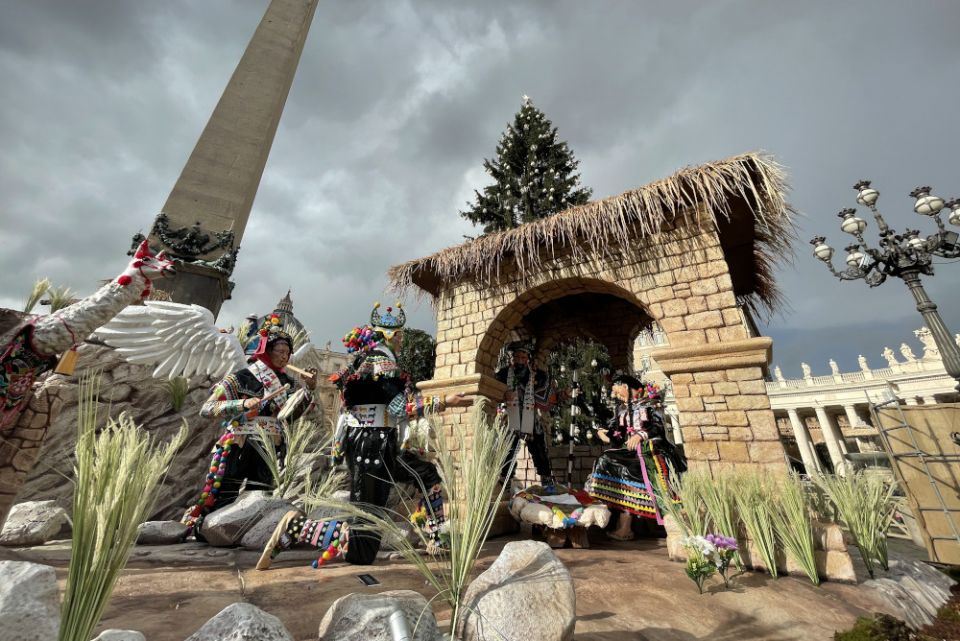 The Nativity scene is pictured in St. Peter's Square during a preview for journalists at the Vatican Dec. 9. The Nativity is from Peru's Huancavelica region and was unveiled to the public Dec. 10 during a Christmas tree lighting ceremony. (CNS/Junno Arocho Esteves)

Meanwhile, across the globe, in St. Peter's square, this year's nativity scene came from the Huancavelica region of Peru. Mary and Joseph have features akin to those of the Indigenous people in that region and they are clad in traditional Andean clothing, as is the angel who hovers above. They are accompanied by llamas, not camels, and they are bearing corn, quinoa and potatoes, none of which would have been known to first-century Jews in Israel.

Is this nativity scene "blasphemous"? Of course not.

In the church of St. Augustine, one of the historically black parishes in Washington, D.C., there is a stained-glass window of the parish's patron, and he is presented as a Black man. Augustine was from North Africa and probably looked little different from other Mediterranean men of his time, not Black the way the window portrays him. But the parish is not a history classroom, it is a church, and if the parishioners want to imagine their patron as a Black man, as someone who looks like them, so be it.

I have a crucifix in my home that I procured in Indonesia. Christ has Asian features. Of course he does. If the Christians of Asia, or Africa, or North America do not see Christ as both the man Jesus who suffered and died in Jerusalem and the universal savior of the world, they will have only understood half of the Christian kerygma.

And the most famous picture of Jesus in the United States, Warner Sallman's "The Head of Christ," makes the Son of David look like "an Aryan from Darien," and so what? Everyone should be able to imagine Christ, the Blessed Mother and the saints as looking like a member of their family. This is especially true of the poor and the suffering.

Everyone should be able to imagine Christ, the Blessed Mother and the saints as looking like a member of their family. This is especially true of the poor and the suffering.

George Floyd, murdered so cruelly, so viciously — his sufferings are surely one with those of Christ on the cross. Mary is Floyd's mother as she is mother to us all. As the artist replied when asked if the icon was of Christ or of Floyd, "Yes." A thousand times "Yes."

This truth was brought home to me in 2014 when Boston Cardinal Sean O'Malley and Msgr. Lorenzo Albacete were speaking at the New York Encounter. O'Malley had been with the pope on pilgrimage in Assisi on the previous feast of St. Francis and he recalled that the pope had embraced children suffering from various handicaps at the start of the pilgrimage.

When he spoke, the Holy Father said that when the risen Christ appeared to the disciples, his wounds were still there, and when he ascended into heaven, he took those wounds with him. "These children here are those wounds on the Body of Christ," the pope said. "And we have the opportunity to worship the wounded Christ in their suffering."

Albacete interjected. It is one of the most powerful, challenging things I ever heard him say. "What I want to say is that those very words are not a metaphor," Albacete said. "These poor people are not Christ metaphorically. 'Do it in the name of Christ.' 'Do it remembering how Christ was.' They are in some way, they are the real Christ. There is no other. They are his body now. Otherwise, there has been a dis-Incarnation."

A dis-Incarnation! Those students who signed the petition calling for the icon to be removed, the clownish Jansenists at the Cardinal Newman Society, the thief who stole the icon, all of them have engaged in a dis-Incarnation, arguably the most un-Catholic thing a Catholic can do. They failed to see in the suffering face of George Floyd being murdered the suffering face of Christ, and so could not appreciate the beautiful theological truth evoked by Latimore's icon. They do not need the Grinch to steal Christmas at Catholic University this year. They have forfeited Christ's incarnation all on their own.

Fired EWTN host Gloria Purvis: 'I will never, ever, ever have regrets' for discussing race

What Óscar Romero can teach us about Black Lives Matter

Editorial: Defund the police — or at least de-escalate their excessive use of violence