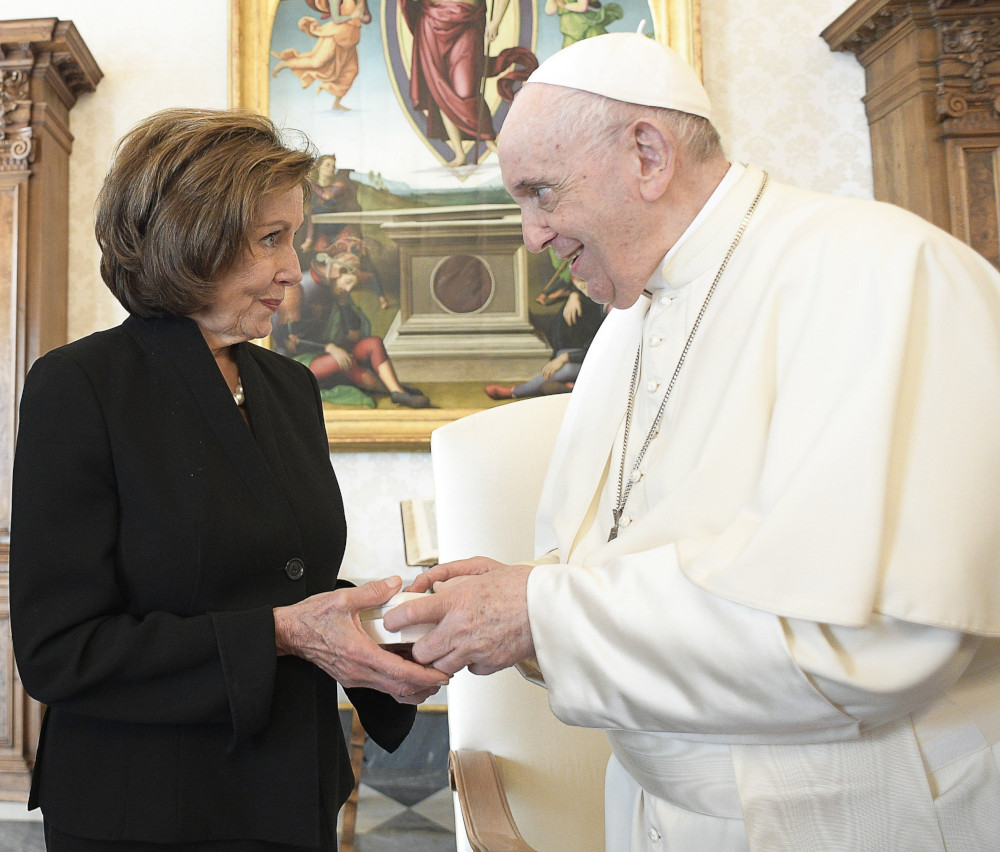 In October 2021, Pope Francis initiated a two-year "Synod on Synodality," aimed at finding out what Catholics and others think about the church. He may get more than he asked for.

Preliminary results indicate one thing: Women are fed up. They like Francis well enough, but they are not much interested in what bishops and priests have to say.

The latest kerfuffle between San Francisco's Archbishop Salvatore Cordileone and House Speaker Nancy Pelosi is at the tip of a very big iceberg.

Pelosi's perceived support of legalized abortion at the federal level collides with Catholic teaching. Hairsplitters who support her will argue that she does not support or promote or procure abortions, she simply supports current American law and works to preserve it.

Hairsplitters on Cordileone's side will argue that because Pelosi is perceived to be, as they say, "pro-abortion," she creates public scandal and therefore must be denied access to the Catholic sacrament of Communion. They say the Code of Canon Law trumps U.S. law.

But Pelosi and Cordileone's battle may be seen more broadly as one battle in a decades-long disintegration of trust between women and the bishops.

Some say it all started with Pope Paul VI's 1968 encyclical, Humanae Vitae, which ignored the recommendation of his own Pontifical Commission on Birth Control. Eight years after the U.S. Food and Drug Administration had approved the first oral contraceptive pill, the pope took some 7,000 words to say "no" to contraceptive measures beyond what came to be known as "natural family planning."

Catholic women in the United States and around the world ignored the pope's decision. You didn't have to track sales of "the pill" to realize what was going on. Jokes about the size of Catholic families suddenly became a gauzy memory. Women were clearly listening to the opinions of the men in the pulpit, then returning to their homes to manage their private matters as they saw fit.

Once women began to bypass church teaching on birth control, they found other reasons to ignore the bishops. At the top of that list are clerical sex abuse and the subsequent episcopal cover-up. But there is also the question of allowing women to be active participants in Masses, and the ordination of women.

The 1983 Code of Canon Law decreed any layperson could perform the duties of lector and acolyte, or altar server. It took another decade before the Vatican agreed that "any layperson" included women. To this day, many bishops around the world want women kept away from the altar, despite Francis' updates to the law that allow women to be formally installed as lectors and acolytes.

Ordaining women as priests is not a discussion the hierarchy is going to have, but ordaining women as deacons is a distinct question. Women were ordained as deacons in the early church. No matter: The naysayers connect the two orders, saying because women priests are definitively forbidden, so also are women deacons. (They overlook the fact that their logic fails. If the two orders are so connected, then the historical fact of ordained women deacons may be used to argue for women priests.)

The arguments over ordination, altar servers, lectors and birth control are all debatable, however. The definitive nature of church teaching on abortion is clear.

But all the same, for a bishop to make a public event out of a private discussion is unseemly. Before she was elected to Congress, Pelosi had five children — after the FDA approved the birth control pill. She is proud of her Catholic heritage.

Pelosi is the most powerful Democrat in the Congress. Would Cordileone, or any other bishop, prefer a non-Catholic? Or is the problem that Pelosi is female?

A version of this story appeared in the June 24-July 7, 2022 print issue under the headline: Pelosi vs. Cordileone isn't only about abortion. It's about women and bishops..