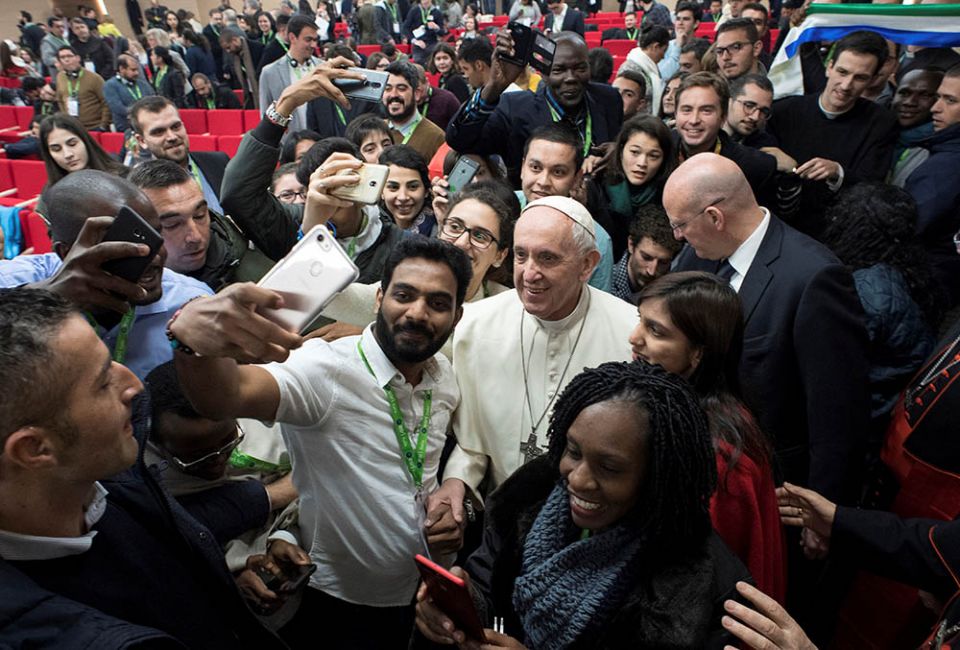 Pope Francis poses for a selfie during a pre-synod gathering of youth delegates at the Pontifical International Maria Mater Ecclesiae College in Rome March 19, 2018. The meeting was in preparation for the Synod of Bishops on young people in October 2018. (CNS/Vatican Media)

Church leaders often wring their hands over fear that withholding public condemnation of individuals about sexuality, politics, Communion or some other issue could be the potential source of "scandal" to the faithful. Yet many young adults, affiliated and disaffiliated Catholics alike, regularly point to such condemnations — particularly when they target the most vulnerable and marginalized — as the real stumbling block to faith in general and religious affiliation in particular.

The 2018 pre-synodal meeting of young adults from around the world bears witness to this truth. The final document, composed by the young adults themselves at the invitation of Pope Francis for the Synod of Bishops on young people, says: "Lots of young people, having lost trust in institutions, have become disaffiliated with organized religion and would not see themselves as 'religious.' However, young people are open to the spiritual."

They add, "Scandals attributed to the Church — both real and perceived — affect the confidence of young people in the Church and in the traditional institutions for which she stands."

For at least the last four years since this document was published, and perhaps even longer, I have been thinking about the expression "spiritual but not religious." Part of this has to do with my identity as a pastoral minister, a Franciscan friar and Catholic priest. In that capacity, I was initially inclined like many other ordained and lay ministers committed to serving the church to be pessimistic and see such phrases as reflecting the perennial boogeymen of our contemporary era: individualism, relativism, consumerism and so on.

I admit that it worried me a little and it appeared to be a sign that an increasing number of people — especially young people — were rejecting a tradition and institution I cared about so deeply.

What if we focused first on the embrace of one's identity as 'spiritual'?

At the same time, I was also looking at the sociological reports and the self-identification of increasing numbers of people through the lens of a theologian and scholar of spirituality. And the combination of my professional scholarly assessment and pastoral ministry with young people began leading me toward a much different, even more optimistic perspective.

For too long, pastors and parents have dwelt on the ostensible rejection of "the religious," that second part of the self-identifying phrase, which portends bad things for traditional institutions of religious belonging. To many people, it is seen as the only important data point in the phrase, overshadowing what is, in my estimation, much more significant.

What if we focused first on the embrace of one's identity as "spiritual"?

What if our starting point in thinking about what it means to be a person in communion with God, oneself and the world was not reduced to external expressions of institutional belonging, but instead began with attention to humans' inherent capacity for God?

I am reminded of something Missionary Oblate of Mary Immaculate Fr. Ronald Rolheiser says early in his best-selling book The Holy Longing: The Search for a Christian Spirituality: "Spirituality is not something on the fringes, an option for those with a particular bent. None of us has a choice. Everyone has to have a spirituality and everyone does have one, either a life-giving one or a destructive one."

In the tradition of St. Augustine of Hippo, Rolheiser goes on to say correctly that spirituality is another way of describing the intrinsic desire or passion we have been created with for the divine. Rolheiser adds:

Hence, spirituality is not about serenely picking or rationally choosing certain spiritual activities like going to church, praying or meditating, reading spiritual books, or setting off on some explicit spiritual quest. It is far more basic than that. Long before we do anything religious at all, we have to do something about the fire that burns within us. What we do with that fire, how we channel it, is our spirituality.

All humans have a yearning for relationship with God, but not everyone finds that traditional forms of institutional belonging supports, deepens or sustains a spiritual life of prayer and action in keeping with God's revelation in Jesus Christ. Sadly, infuriatingly even, sometimes the institution — and those members and leaders who identify with it — actually creates impediments to authentic living of faith and relationship with God.

I am, therefore, not the least surprised that many people, especially young adults, find that church leaders appear far more interested in embracing culture warrior identities and dedicating time to which political opponents they wish to condemn rather than embracing the most marginalized and oppressed in our communities. Such church leaders indeed appear to be the successors of the apostles, but mostly in terms of the apostles' efforts to make themselves the most important and prevent others from relationship with Jesus.

This, for young adults, is an obstacle, a stumbling block, a scandal that prevents them from being a "religious" person.

That so many young adults continue to recognize a spiritual dimension in their lives is a hopeful sign that they are also seeking the language and frameworks that religious traditions can provide.

And yet, so many of the same spiritual seekers continue to recognize a holy longing within them. God continues to draw near to them and invite them into relationship. The problem is that, as the young adults in 2018 state in their document, many of the religiously disaffiliated then struggle today to find language and sources for meaning-making to interpret their spiritual lives in a context where the traditional institutions no longer suffice.

As I wrote in an academic article last year, I still have hope that Catholicism generally and the various spiritual traditions within it (such as the Franciscan tradition) can offer resources for meaning-making and religious belonging for contemporary women and men. That so many young adults continue to recognize a spiritual dimension in their lives is a hopeful sign that they are also seeking the language and frameworks that religious traditions can provide.

But to get there, we have to address the real scandals of contemporary religious institutions, including the failure to fully acknowledge, reckon with and take responsibility for sexual abuse and its cover-up; inadequate respect for and opportunities open to women in church leadership and ministry; discrimination against LGBTQ persons; insufficient resources and attention paid to urgent ethical crises in society beyond abortion (such as the plight of immigrants and refugees, income inequality, global climate change and others); and, as the young people in 2018 make clear, the absence of paths for young adults to take on leadership roles in the church and be accompanied by mentors in faith and ministry who treat them like the adults they are.

So perhaps the expression "I am spiritual, but not religious" is neither as threatening nor as bad as many people think it is. In fact, it may be a great sign of possibility and hope.

The key will be for those in leadership positions of the church to recognize the work of the Holy Spirit in the lives of these spiritual seekers, hear them, learn from them, meet them where they are and walk together with them in the spirit of accompaniment God is calling the church to live. Maybe then, embracing the "religious" part won't seem like such a challenge for the next generation.

A version of this story appeared in the May 27-June 9, 2022 print issue under the headline: Being 'spiritual but not religious' isn't a bad thing .

Let's be honest: It's a lack of faith

As Biden prepares to meet Pope Francis, a call to honor greatest commandment