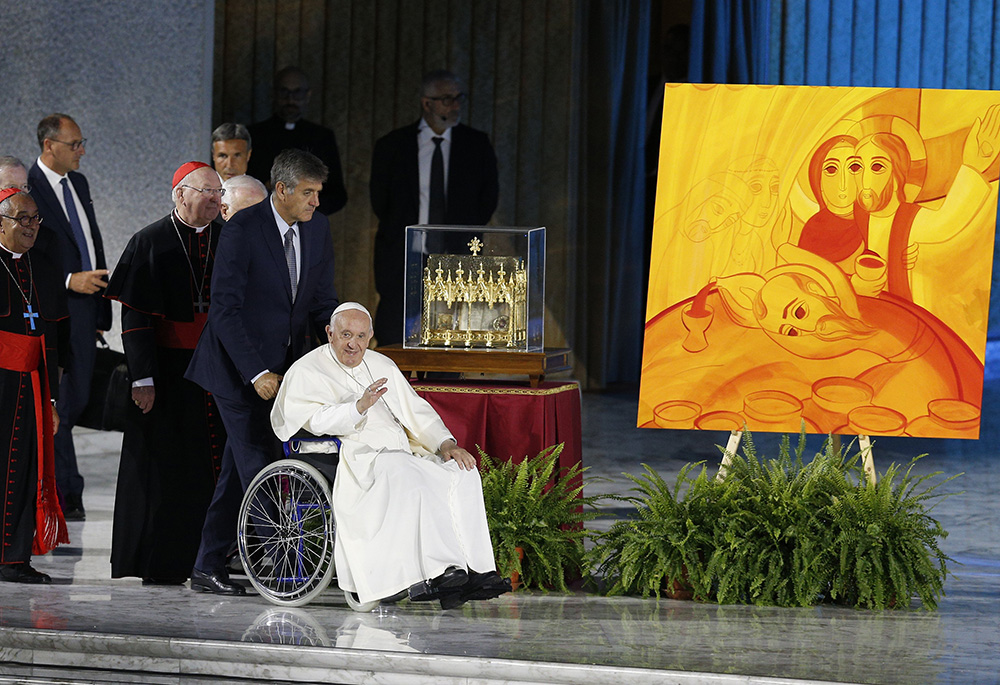 Pope Francis arrives to open the World Meeting of Families in the Paul VI hall June 22 at the Vatican. (CNS/Paul Haring)

The World Meeting of Families concluded yesterday, June 26, in Rome. This year's four-day gathering was both more modest and more ambitious than previous iterations of the event. There was less spectacle and more focus on actual ministry to families.

Pope John Paul II, who started the world meetings, liked the spectacle — the open-air Masses in large arenas, tens of thousands of people stretching down the boulevards of a Philadelphia or Denver as they hosted the meeting or World Youth Day. I remember camping out on the Mall in Washington the night before the Holy Father said Mass there in 1979. It was fun. But it is not clear what those gatherings achieved. What they made up in size seemed diminished in depth.

"We have to ask ourselves, why are we bringing people from different parts of the world instead of having a national, decentralized gathering of families in the different countries?" said Cardinal Kevin Farrell, prefect of the Dicastery for Laity, the Family and Life, in an interview last week with America magazine. Farrell emphasized that this year's meeting gathered together those diocesan leaders who work in family life ministries.

One of the testimonies at the opening session came from a couple, Serena Zangla and Luigi Franco, who had lived together for 10 years before getting married, what we used to call "living in sin." They related that they had difficulty finding a parish that would accept them and their three children. Finally they found a community that welcomed them and they plan to get married soon.

Another testimony came from Zakia Seddiki, the widow of Luca Attanasio, the Italian ambassador to the Democratic Republic of the Congo, who was killed in an ambush in 2021. Seddiki, a Muslim, spoke about the way she and her husband, who was Catholic, raised their children, instructing them in both religious traditions and how the love that sustained her married life continued even after the tragedy of her husband's death. It was very powerful.

In his talk, the pope invoked the parable of the good Samaritan, as he did in the 2020 encyclical Fratelli Tutti, as the ground from which the church's ministry should spring, and the standard by which it should be guided and judged.

"I think of the parable of the good Samaritan who meets someone wounded and in need," the pope said. "He draws near to him, cares for him and helps him to resume his journey. That is what I want the church to be for all of you! A good Samaritan that draws near to you and helps you to continue your journey and to take a step forward, however small. Never forget that closeness is the ‘style' of God, closeness and tender love."

The pope mentioned all the families which had offered testimonies, and gave a kind of master class for priests the world over who want to understand what accompaniment means.

In replying to Zangla and Franco, the pope first apologized that they had difficulty finding a parish that would welcome them. He went on to say:

It is good to hear this. It points us past the competing reductionistic ecclesiologies of our time, those on the right which reduce the Catholic faith to a rite, and those on the left which reduce Catholicism to "a certain idea of the Church today with an emphasis on social justice," about which Villanova theologian Massimo Faggioli recently wrote. Ours is a God who absconds, who transcends. You can't capture him in ritual nor activism.

Of all the varied subjects I have written about over the years, one of the most consistent concerns has been the reduction of religion to ethics: the inability of American Catholics to recognize that our Catholic ethical teachings are rooted in dogmatic and doctrinal claims. One of the most obvious points of consistency among the post-conciliar popes is the refusal to do this, and their insistence that our beliefs demand a certain anthropology which, in turn, grounds and shapes our ethics.

Matrimony and family need ethics, to be sure, but they need more than ethics. Grace abounds (cf. Romans 5:20) not in our finer moments but in our more sinful ones. Francis, who is so attuned to human suffering, has such a knack for reminding us of God's closeness, and of the need for the Church's ministers to mimic that closeness. It is that which makes this World Meeting of Families so special.