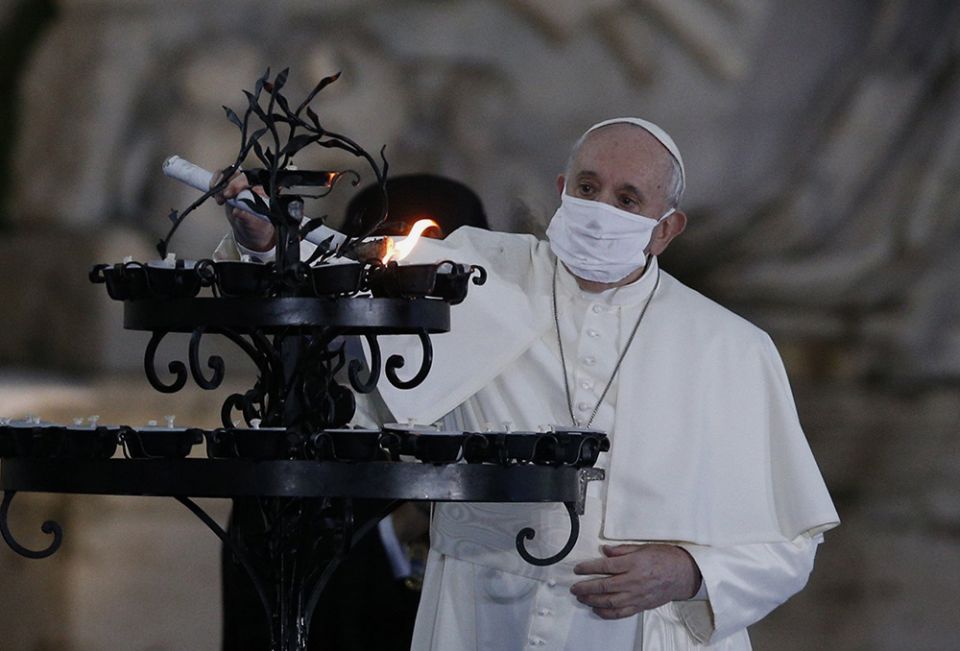 Pope Francis lights a candelabra at the conclusion of an encounter to pray for peace in Piazza del Campidoglio in Rome Oct. 20. (CNS/Paul Haring)

How close is Pope Francis to proclaiming Gospel nonviolence as the church's central teaching on how to confront the curse of war? How close is he to removing the just war theory from its long-term, prominent position — making the just war theory at long last a footnote in the church's history of moral teaching? How close is he to making the proactive, assertive stance of nonviolent peacemaking the Christian's first choice when confronting oppression, violence and war?

It seems as if his recent encyclical, Fratelli Tutti, has already put aside the passive stance of the just war theory. So when will he authoritatively lay out the way of Christian nonviolence for the world to learn and practice?

In Fratelli Tutti, Francis includes some paragraphs, 256-262, that are extremely harsh on the just war theory: "In recent decades, every single war has been ostensibly 'justified' " (even preemptive wars). Note the quotation marks of irony.

He goes on to say that, with the development of nuclear, chemical and biological weapons, "we can no longer think of war as a solution, because its risks will probably always be greater than its supposed benefits."

In other words, Francis does not see that the criterion of just war theory, "proportionality," can be met. Nor does he think the criterion of "noncombatant immunity" can ever be observed in modern wars. "The enormous and growing possibilities offered by new technologies," he writes, "have granted war an uncontrollable destructive power over great numbers of innocent civilians."

Most tellingly, in a footnote he writes: "Augustine, who forged a concept of 'just war' that we no longer uphold in our own day, also said that 'it is a higher glory still to stay war itself with a word, than to slay men with the sword, and to procure or maintain peace by peace, not by war.' "

Francis might be downgrading the just war theory from its former place in Christian thinking, but does that mean he is embracing Gospel nonviolence as the alternative stance? One cannot conclude that unless one also reads his 2017 World Day of Peace message, "Nonviolence: A Style of Politics for Peace."

In that document, he touches almost all the bases of a fulsome understanding of Gospel nonviolence and begins to lay out what an encyclical on nonviolence could lay out even more fully and forcefully.

First, he understands that according to the New Testament, nonviolence is what Jesus modeled and taught as the way to confront and overcome oppression and violence. Just war theory, on the other hand, is not taught by Jesus. It is a piece of natural law philosophy that came to us from the classicist Cicero by way of Augustine.

Francis notes, "Jesus marked out the path of nonviolence. He walked that path to the very end, to the cross, whereby he became our peace and put an end to hostility. ... To be true followers of Jesus today also includes embracing his teaching about nonviolence." 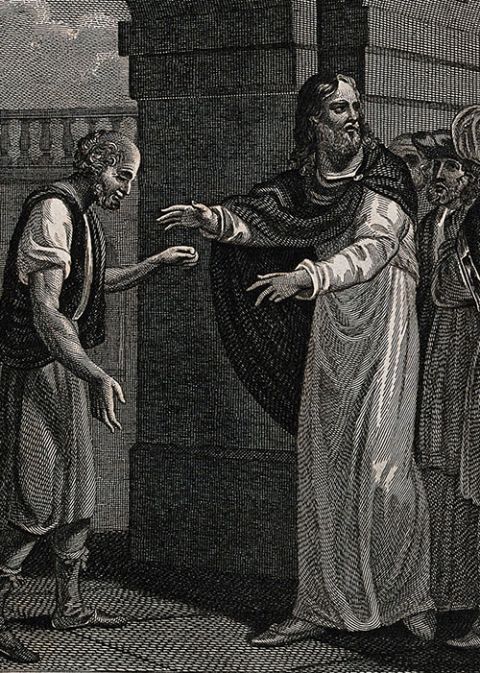 In an encyclical, Francis could elaborate even further how Jesus' life exemplifies from beginning to end the praxis of a nonviolent resister. For example, he could show how in Mark 3 Jesus resists the twisted way the Pharisees are practicing Sabbath rest. He boldly heals the man with a withered hand. This early in his public life, he has the leaders in charge ready to kill him for standing up to them and nonviolently showing a different way forward.

Second, Francis recognizes that many people confuse nonviolence with pacifism or with a passive response to evil and violence. "Nonviolence is sometimes taken to mean surrender, lack of involvement and passivity, but this is not the case," he writes in the World Day of Peace message. Francis quotes Pope Benedict XVI, who said that nonviolence "does not consist in succumbing to evil ... but in responding to evil with good, and thereby breaking the chain of injustice."

In an encyclical, Francis would be able to more fully explain how nonviolent action works in a jujitsu fashion, using such weapons as noncooperation, civil resistance, boycotts and the power of self-suffering to overcome violence and oppression.

Third, in this brief message of peace to the world, Francis already begins to put forward some of the earth-shattering, surprising political victories achieved through nonviolent action. He quotes Pope John Paul II, who wrote that he thought the division between East and West was going to lead to another war but instead the Berlin Wall came down and one country after another was freed — through Solidarity in Poland, the revolution of candles in East Germany, the milelong nonviolent march in Lithuania.

"This peaceful political transition was made possible in part 'by the non-violent commitment of people who, while always refusing to yield to the force of power, succeeded time after time in finding effective ways of bearing witness to the truth,' " Francis writes, quoting John Paul II.

In an encyclical, Francis will be able to dramatize many of the other momentous political changes brought about by active nonviolence over the last 80 years, such as the resistance of the Danish people who rescued their Jewish brothers and sisters from the hands of the Nazis, the People Power Revolution that overcame the dictatorial Ferdinand Marcos in the Philippines, and the young people who engineered the nonviolent removal of Slobodan Milosevic in Serbia.

So many people think the only real protection people have against oppression and violence is violence. So few people have heard the momentous stories of nonviolence and have no idea of its accomplishments. Bringing these stories forward in a major teaching document from the pope will bring some credibility and enlightenment.

Fourth, Francis is well-aware of the many individual heroes of nonviolence, from every place across the globe and from every faith tradition. He mentions four examples in his World Day of Peace message: Mahatma Gandhi and Khan Abdul Ghaffar Khan in the liberation of India; Dr. Martin Luther King in combating racial discrimination; and Leymah Gbowee and the thousands of Liberian women who helped end the second civil war in Liberia.

In an encyclical, the pope will be able to describe the many current heroes, especially Catholics, who are successfully resisting violence and oppression across the world, the new heroes of peacemaking. He could share the stories of the group of 80 advisers he met with in 2016 and 2019, who told their stories of resisting violence in their home countries with nonviolence.

Finally, the pope evidences in the peace message a clear sense of how the virtue of nonviolence as a lifestyle and as a way of action comes to be practiced. He talks about the important role of the family in grounding and nurturing the virtue of peacemaking and nonviolence.

"If violence has its source in the human heart, then it is fundamental that nonviolence be practiced before all else within families. ... The family is the indispensable crucible in which spouses, parents and children, brothers and sisters, learn to communicate and to show generous concern for one another, and in which frictions and even conflicts have to be resolved not by force but by dialogue, respect, concern for the good of the other, mercy and forgiveness. From within families, the joy of love spills out into the world and radiates to the whole of society," he writes.

Imagine an encyclical in which Francis goes beyond advice for the family and calls the whole church to learn and practice nonviolence. Today, seminaries do not train seminarians in nonviolence. Consequently, not that many priests can preach about nonviolence to their communities.

So why should Francis issue an encyclical on the topic if he has already taught it? The answer is there is a great difference between an authoritative, well-developed official teaching document issued to the whole world and a 15-minute address from a balcony at the Vatican. The power of an encyclical is exemplified by the impact of "Laudato Si', on Care for Our Common Home," the pope's encyclical on the environment.

Why has the pope not issued an encyclical on nonviolence? Perhaps he is waiting for more of a grassroots groundswell for nonviolence to improve the chances for a positive reception. Perhaps he does not know how increasingly sour, at least in America, the populace has become on war. The last four wars of choice America has waged — Korea, Vietnam, Afghanistan and Iraq — have ended either with an outright loss or as fiascoes of waste and foolhardiness. Perhaps he does not recognize as yet the hunger people have for an alternative to violence and war, one that has been proven over and over again.

Not all people are called to follow the Gospel message and example of Jesus, but Christians certainly are. It will be a great blessing for Christians to have the church publicly reclaim Gospel nonviolence.

[Terrence J. Rynne teaches peace studies at Marquette University and is an NCR board member. He and his wife, Sally, are founders of the Marquette University Center for Peacemaking. He is the author of Gandhi and Jesus: The Saving Power of Nonviolence and Jesus Christ, Peacemaker: A New Theology of Peace.]

Commentary | The pope has already taught nonviolence: Let's put it in an encyclical