Puerto Rico's situation is getting worse, not better 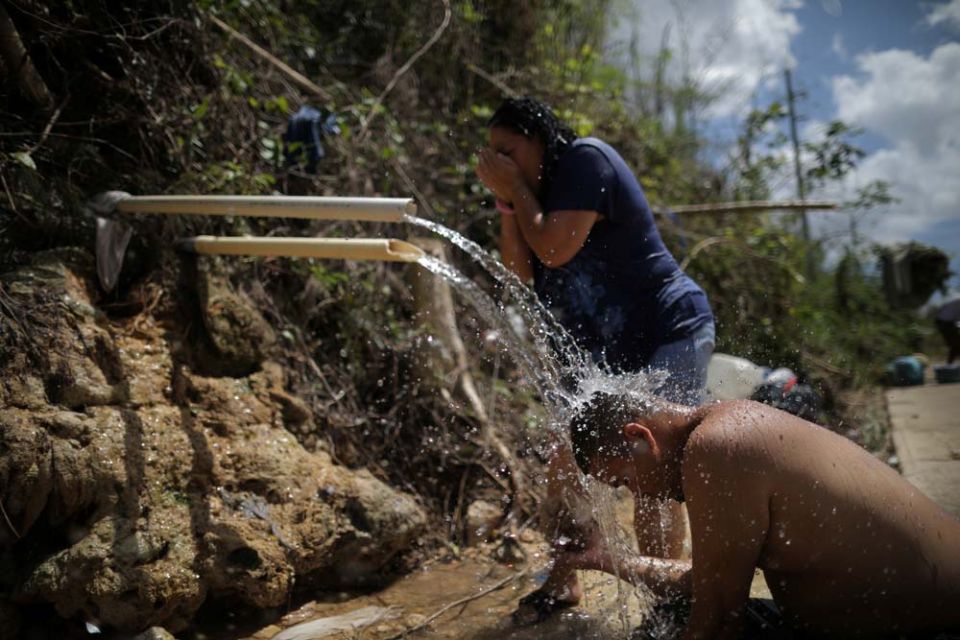 Local residents refresh themselves with water from a pipe on the side of a road Oct. 4, more than two weeks after Hurricane Maria hit Ciales, Puerto Rico. When the hurricane made landfall Sept. 20, it wreaked havoc on the island, causing a level of widespread destruction and disorganization paralleled by few storms in U.S. history. (CNS/Carlos Barria, Reuters)

In the weeks after a major hurricane, or other natural disaster, normalcy returns slowly but steadily. First, food, water and medicine are rushed to the people affected, and then the roads are cleared and electricity is restored. People clean their houses of debris. Little by little, things get better and over time return to normalcy.

In Puerto Rico, the situation is getting worse, not better.

Three weeks after the storm hit, less than 20 percent of Puerto Ricans have power. More than a third of the 3.4 million people in Puerto Rico do not have access to potable water. Last week, the governor revealed that two people had died from leptospirosis, a water-borne disease caused by animal urine getting into drinking water. It is easily treatable in normal circumstances. The previously dangerous landfills flooded, further filling the rivers and streams with dangerous toxins. Of course, the tourism industry, which accounts for 6 percent of the island's , has come to a halt and many businesses remain shuttered. The island's economy was a wreck before the hurricane. Now it is prostrate.

Our president visited the island and threw paper towels to the people, the way a tennis star hurls balls into the crowd after a winning match. Since returning to the White House, he has spoken about the crisis mostly through his favored method: tweets. "Electric and all infrastructure was disaster before hurricanes," the Ranter-in-Chief tweeted. And, then this: " 'Puerto Rico survived the Hurricanes, now a financial crisis looms largely of their own making,' says Sharyl Attkisson." He warned that there might be a pullback of federal aid: "We cannot keep FEMA, the Military & the First Responders, who have been amazing (under the most difficult circumstances) in P.R. forever!"

Let's look at these utterances for a moment. Unsurprisingly, the president showed himself incapable of empathy. Throughout the crisis, his evident concern has been how he looks, not whether people in dire straits are being helped. He is right that the infrastructure was a mess before the hurricane, but is blissfully ignorant of how the federal government has been complicit for years in Puerto Rico's economic downturn. And, the man who can pick up the phone and get a briefing from the military personnel on the island, or from the governor of Puerto Rico, or from the director of FEMA, instead relies for his information on Ms. Attkisson, a conservative television personality.

We have come to expect the president to be reckless when discussing a potential nuclear war with North Korea. We know that he seems to relish insulting allies of long-standing and shared values. We know he likes to demean public service and those who perform it, even if they belong to his own party. We know that he is — how to put this charitably — miscast in his current role. But, I had thought there was a cleverness about the man, at least enough to know that every president looks best when healing the nation's wounds after a tragedy, that these are moments when he can rise above the rancor of partisanship and speak on behalf of the entire nation, when he can dedicate resources without anyone quibbling about the cost. Nah. Puerto Ricans are Latinos and one wonders if Mr. Trump has ever met a Latino he did not feel compelled to insult.

For the sake of Puerto Rico, I hope more people do not flee to the mainland. For the sake of the United States, I hope enough Puerto Ricans flee to Florida and flip that state from red to blue.

Archbishop of San Juan Roberto Gonzalez spoke to WBUR last week about the crisis. The host, Bob Oakes, opened the interview by asking about how many churches were damaged by the storm. Gonzalez explained that most churches endured some damage, but he added, "However, buildings can be repaired. What concerns us above everything else is the welfare of people."

"We need help in providing basics — water, food, medications," the archbishop said when asked what help the people need. "There is a great amount of human suffering. The hurricanes, especially Hurricane Maria, has uncovered the enormous amount of poverty, the devastation has made visible the huge amount of people who live in wooden homes, with zinc roofs, and the hurricane just pretty much flew away all of those roofs and many of the walls of people's home. A Vietnam veteran said to me that when he walked out of his home after the hurricane, he thought he was in Vietnam."

Unlike the president, organized labor responded to the needs of our brothers and sisters in Puerto Rico handsomely. United Airlines provided a jumbo jet that flew more than 300 electricians, nurses, carpenters, truck drivers, and doctors to the island. They fan out each morning to their assigned destinations to help clear roads, rebuild the electrical grid, and help in the hospitals and in the homes of those unable to get to a hospital.

Damon Silvers, the policy director of the -CIO, accompanied the team to San Juan and told me the first night they arrived "the scene was chaotic" at the Roberto Clemente Coliseum where the men from the -CIO were being housed. They were sleeping in the concourses while the women in the group did the same at the adjacent baseball stadium. Silvers said he was trying unsuccessfully to find some water for the volunteers when the archbishop and the mayor of San Juan showed up. The three began distributing bottled water and frozen yogurt, but the archbishop was quickly pulled aside by union members asking for a blessing, or a moment of prayer with the group. Silvers said the scene was very moving as he watched the archbishop, who is of slight build, embracing truck drivers and carpenters who were twice his size, praying with a group of women, thanking all the union folk for their help and expressing the gratitude of the people of Puerto Rico.

That is how decent people deal with a crisis like this. The ones who can help do so. The ones who receive the help express gratitude. Alas for our poor nation, our president seems incapable of such common decency, his twisted vision increasingly resulting in policies that are morally criminal: tanking the Affordable Care Act, rolling back environmental regulations, and, now, threatening to stop aid to Puerto Rico. How long can these poor suffering people be ignored? How long can this insufferable president be countenanced? Unless steps are taken, and taken quickly, to get food, water and medicine to the people of Puerto Rico, those two questions may become indelibly linked.

Column | Puerto Rico's situation is getting worse, not better

I felt sorry for Cardinal Dolan at the Al Smith dinner