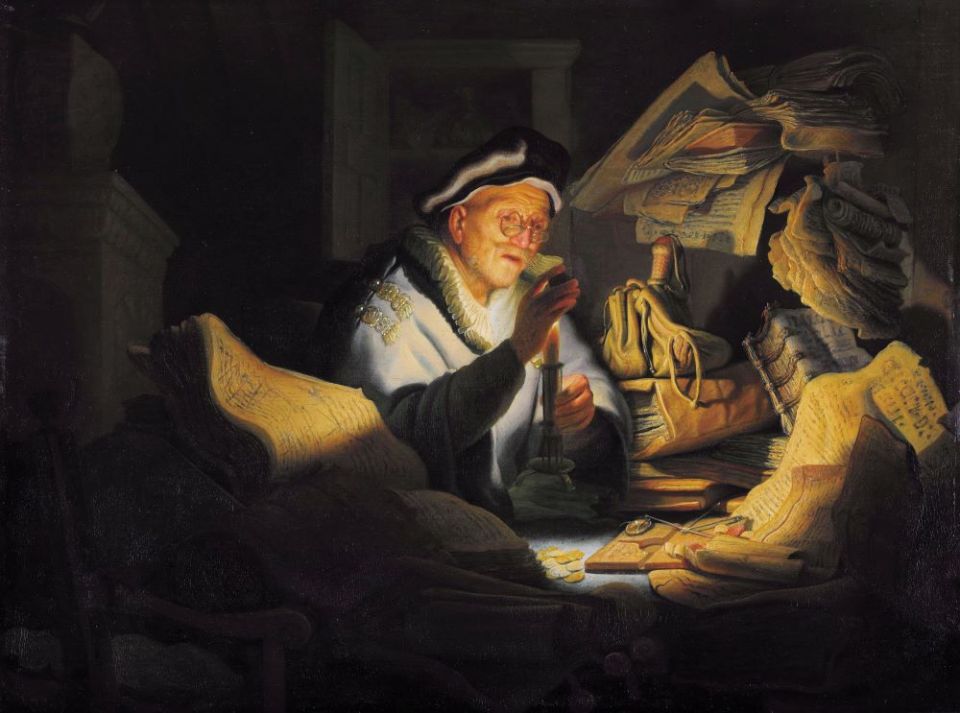 Some scholars wrongly title this Rembrandt painting "The Parable of the Rich Fool," based on Luke 12:16-20. It is "The Money Changer" (Der Geldwechsler). (Wikimedia Commons/The University of Leipzig)

My father loved parables — stories that taught, stories that presented ideas and morals in ways that made pictures in people's minds. … Because he believed stories were so important as teaching tools.

— Octavia Butler, The Parable of the Talents

If studied correctly, "the parables will receive a like interpretation from all." So wrote Irenaeus, the second-century Christian theologian, in Against Heresies: Book Two. This inaccurate claim, however, can be easily disproved by Irenaeus' own parable interpretations, not to mention the myriad of different interpretations of Jesus' parables that have occurred over the intervening centuries. Although some parables are relatively simple and straightforward, others can be elusive, enigmatic and encourage a range of interpretations as these short narratives continue to challenge our minds, hearts and imaginations.

As scholars explore what parables, these "teaching tools" mean, they also attempt to discover how parables work, that is how they produce meaning, such as the literary or rhetorical ways in which they seek to communicate and persuade. A critical component, as Octavia Butler puts it, is how they create "pictures in people's minds," which corresponds to the argument of the New Testament scholar C. H. Dodd, who claimed that Jesus' parables "are the natural expression of the mind that sees truth in concrete pictures rather than conceives it in abstractions."

How are we to understand the "pictures" these ancient parables create in the minds of today's hearers? To answer that question, it is helpful to explore how parables "work" in ways similar to pictures, as an intriguing painting by Rembrandt illustrates. This exploration sheds some light on why parables, like images, can produce multiple responses or meanings:

The room is dark, illuminated by a single candle. An elderly man sits at a desk overloaded with books and papers, some written in what appears to be Hebrew script. The man, a pince-nez perched on his nose, thoughtfully examines a coin. The hand holding the coin — with fingers made partially translucent by the candle's light — blocks the viewer from seeing the candle directly, but its glowing light illuminates the man, a small area of the desk and other elements in the darkened room.

All inessential elements are cloaked in shadows. On the desk are a gold-weigher's scale with a box of weights, as well as chaotic stacks of books and papers, with a huge (account?) book open on the man's right, through which large Xs have been marked through some entries. The man's face is brilliantly lit, and we see virtually every detail of his aged, wrinkled face — including his reddened nose, right ear and eyelids, as well as the soft shadows produced by his glasses — as he gazes at the coin in his hand. Other coins on the desk glimmer in the reflected glow of the candle's light, as do the epaulets on the man's shoulder. The fancy ruff around his neck also glows in the light, which then reflects even more light onto the man's face.

Who is this man and what does this painting say to its viewers? The painting resists characterization and it leaves many questions unanswered — even the title and subject of the work is disputed. Some scholars argue that it is a depiction of the rich fool parable in Luke 12:16­-20, but the Gemäldegalerie in Berlin (correctly) entitles it, "The Money Changer" (Der Geldwechsler).

Parables can create vivid pictures in the mind, but, like this painting by Rembrandt, those pictures are often enigmatic and sometimes puzzling (e.g., one meaning of the word used in Hebrew for parable, mashal, can be "riddle"). For example, William Blake compared his art to the parables and fables of Aesop and declared: "The wisest of the Ancients considered what is not too Explicit as the fittest for Instruction because it rouzes the faculties to act." Or, as Dodd put it, a parable leaves "the mind in sufficient doubt about its precise application to tease it into active thought." That aspect of parables can give them tremendous power to affect their hearers and readers in numerous ways — challenging them to change their attitudes, beliefs and behaviors.

In rhetorical terms, both parables and visual images often function in a way analogous to enthymemes. An enthymeme is a syllogism with an unstated premise — one of the two propositions on which a syllogism's conclusion is based. A complete syllogism contains two explicitly stated premises that lead to a necessary conclusion, such as this famous syllogism about Socrates:

All humans are mortal;
Socrates is human;
Therefore, Socrates is mortal.

Unlike syllogisms, enthymemes omit a premise and the unstated premise has to be supplied by the audience. The above syllogism about Socrates, for example, easily transforms into an enthymeme (all humans are mortal; therefore, Socrates is mortal), because it is simple enough to supply the proposition that Socrates was human.

Parables and visual images thus can be enthymematic by omitting "premises" of one kind or another, thus leading to ambiguity and multiple meanings. The enthymematic process provokes divergent responses as interpreters endeavor to understand them since not every audience member envisions the missing premise in the same way.

Sometimes in parables and visual images, the "missing premise" can be unintentionally omitted. Many social and cultural assumptions in ancient texts, for instance, are incomprehensible to most modern readers. Thus, a key role for interpreters is to strive to understand the meanings of parables in the contexts of Jesus' life and ministry by attempting to fill in the "missing premises" or gaps with historical, social and cultural information, and then to contextualize the parables of Jesus authentically — making them relevant for contemporary society without anachronizing or domesticating his message.

Related: Artist illuminates Jesus' radical message in the Way of the Cross

In addition, because of the nature of parables and visual images, a premise, or other such "gaps," is intentionally omitted, as is the case in Rembrandt's painting.

The lighting spotlights the main character and the psychological depth opened up by Rembrandt's brilliant manipulation of light and shadow (chiaroscuro) is seemingly bottomless and, along with the man's seemingly introspective detachment, also creates a sense of mystery. That is, we get a strong sense of something deeply serious going on in the mind of this man, but the precise nature of his thoughts and feelings is, at best, only darkly implied.

Rembrandt uses chiaroscuro both as a dramatic means of portraying a scene and as an effective way of suggesting inner character with psychological insight subtly portrayed with a sense of mystery. The rays of light are reflected in various ways and sundry places, just as parables are reflected in different ways in different contexts and heard in numerous ways by various hearers. Rembrandt illuminates some objects clearly, while other aspects remain murky or obscure, placed deliberately in the shadows, creating uncertainties and provoking debates.

In a similar way, the parables of Jesus illuminate some things as clear as day. Other aspects become clearer as we learn more and more about the first-century contexts in which Jesus created and his followers preserved, transmitted and transformed his words. Whereas still other elements — because of the nature of the parabolic word — remain deliberately in the shadows, provoking our responses as we endeavor to understand Jesus' parables more clearly in his context and ours and seek to change our attitudes, beliefs and behaviors accordingly.

David B. Gowler is the Pierce Chair of Religion at Oxford College of Emory University and senior faculty fellow, Center for Ethics, Emory University. He is the author of several books; dozens of articles, book chapters, and book reviews; and is the editor or coeditor of over 30 books. His books on the parables include What are They Saying about the the Parables?, The Parables after Jesus, Howard Thurman: Sermons on the Parables.

Here's the must-do agenda for the US bishops