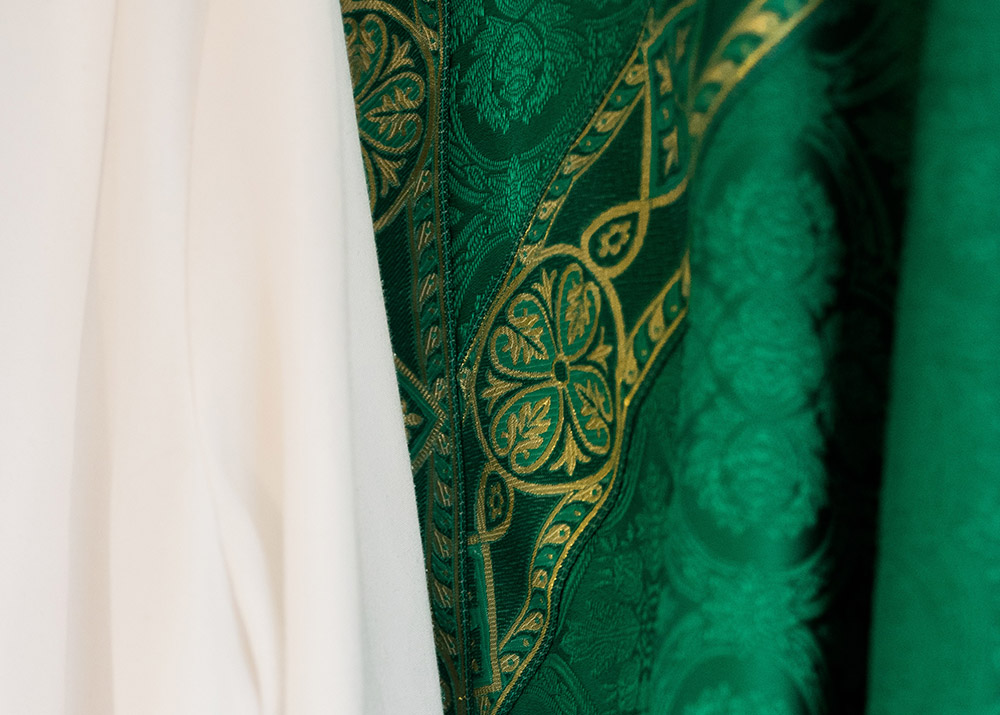 The priesthood of the Catholic Church has always lived with the trappings of a kind of mystique, perhaps because of the celibacy. When the sexual abuse crisis in the church arose, that mystique was tarnished or even eroded. Parishioners no longer put priests on pedestals, and there may be something very good in that. I keep reminding myself that we've been called to walk with the people rather than to lead from on high. The result has become remembering why it was that I became a priest.

Most priests I know do not see themselves as holy, not in the way most people think of being holy, and surely not any more holy than the people they see each Sunday. All too often, it seems to most priests that we are far less holy than many of those folks in the pews.

Because parishioners see priests doing holy things and saying holy words, it's easy, then, to conclude that we must be holy. Doing holy things, however, doesn't make one holy.

I confess I'm not even sure I know what it means to be holy, except that somehow it's about loving people in the ways of Jesus, especially those who seem unlovable or difficult to love. An awful lot of folks seem to be doing that much better than I do. Priests see a lot of people struggling to keep it together, and for the most part they succeed as best they can, and they do it with the sort of love that seems to spiral out of their faith in God's presence.

I like being a priest. I love it and would do it again in a heartbeat. So would most of the priests I know. There are moments I wouldn't give it up for the world, like when someone comes up after Mass with tears in their eyes and tells me that what I just said was exactly what they needed that week, even though I'm not sure what exactly it was that I said and that they needed to hear.

It's at such moments more than at any other that I believe in the presence of the Holy Spirit, simply because I can't explain it any other way, especially when I walk back to the presider's chair after a homily and say to myself that that was probably the worst, most boring and uninteresting homily I have ever preached, and if not the worst, then most assuredly the second worst.

Most priests are happy being priests. People are good to priests, sometimes too good, and the risk is always that I'll begin thinking I deserve it or have earned it. I need to keep reminding myself that it's the priesthood that they are being good to. It's difficult to keep that in balance — to appreciate their kindness without thinking that it's about me.

That is one of the reasons why I pray, to work at keeping a sense of balance, though I'm not so sure I'm a very good pray-er. Most priests I talk to feel that way: that all too often it's simply about showing up and trying to let God do whatever it is that God does when we pray.

The truth is that when I pray, sometimes I find myself daydreaming, and sometimes I worry about what's ahead that day, and sometimes I feel sorry for myself, and sometimes I think just maybe that time spent in silence early in the morning was indeed prayer, though I couldn't tell you why. Whatever may have taken place, in the end I simply say amen and move on into the day.

Like everyone else, priests need to be liked, and sometimes that can get in the way of doing what needs to be done. That, too, is one of the reasons I pray. There in the silence at 5:30 in the morning, needs like that have a way of being loud enough to be noticed, persistent enough that they cannot be shut out, rasping enough to recognize from where it is that they are coming.

I don't like having to say no to someone, or having to say difficult things, or having someone angry at me because of what needed to be done. I don't suppose anyone likes that, but when such issues begin to pile up, that's what I wake up thinking about at 3 a.m. I've never felt particularly liked at 3 a.m.

In the beginning, being a priest was fun. Then it also became work. I suspect that in many ways it is no different than being married. It can be a mixed bag, but then that's the way it is with most things worth doing. Life is not always easy or enjoyable. It's never been easy for me to visit people in the hospital or in nursing homes. I've had to work at it. I'm not sure I did hospital visiting very well, but I do think it's probably one of the more worthwhile things I've done over the years.

There are some who think that the life of a priest is one of loneliness, yet that has not been my experience. I will not deny that in my life there have been those times when I have been lonely, but I think this is also true of those who are married. That is a part of the human condition, and all of us must learn to live with such times.

I know as well that for some priests the loneliness of celibacy has been and is a burden, something perhaps they even regret having chosen. Yet in spite of the rhythms of living a celibate life, the vast majority of priests attest that they are happy.

To be human is to live a life of loving and being loved, and while it is quite natural for the human person to long for an intimate loving relationship, there are also many additional ways that such a dynamic is lived out, though none of us live out that ideal as well as we might hope.

But then all of life is in the process of becoming. I've come to realize that in so many ways, for I have been loved by many, and I have tried to live that love in return, imperfect as my efforts have often been. Yet I find myself grateful. While there have been times of loneliness, even more so has love been woven into my comings and goings.

Though at times being a priest has been a bumpy ride, it has also taken me to places I would never have dreamed. I have no complaints – well, maybe a few, though on most days I can't remember them.

There have also been times when, contrary to my instincts and with great resistance, I have surrendered and gone with the flow, and such times have turned out to be gifts, blessings for which I continually give thanks. To all of what has been, I simply say amen.