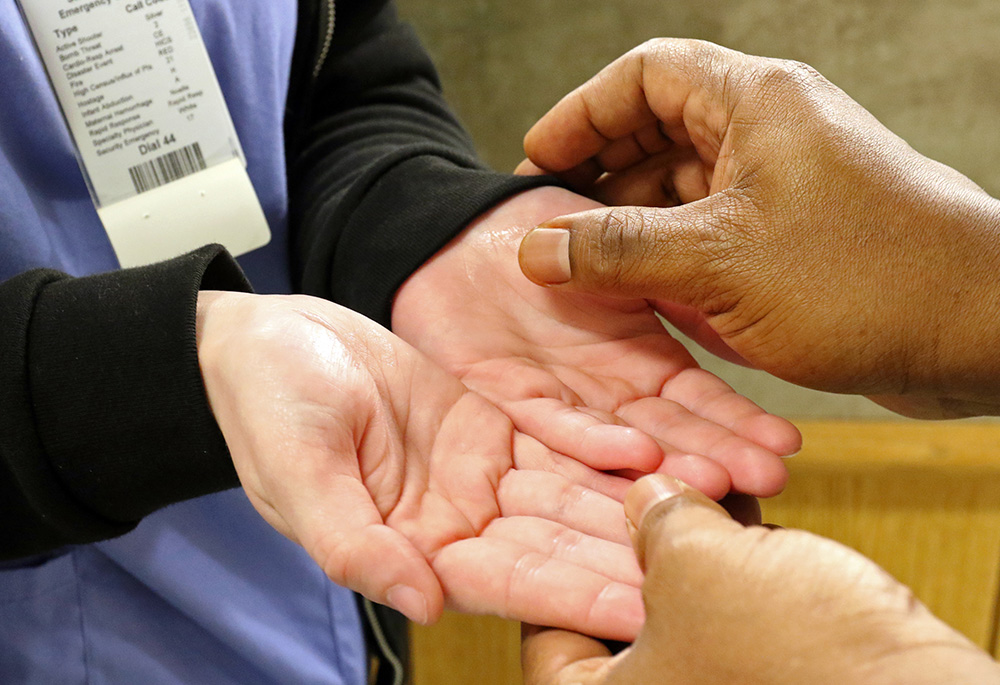 A personal care assistant has her hands anointed in a 2018 photo. (CNS/Gregory A. Shemitz)

What if you were asked to choose a word, an image, or a passage of Scripture to summarize who you are and want to be? What might you choose? High school seniors sometimes choose the phrase they want under their picture in the yearbook. Their grandparents might complete this exercise by planning their funerals. Others make identity statements with tattoos. Reciting the creed, singing and praying are also expressions of our identity.

Jesus chose the context of a Sabbath liturgy to describe himself and his mission to his hometown folk. As Luke tells the story, this happened after Jesus had begun his public life. Before he went to the synagogue in Nazareth, he had been baptized, spent time in the desert, and was getting a reputation in Galilee as a preacher and healer. One wonders what he and others expected as he stood before his neighbors, now not the craftsman son of Joseph, but a public preacher whose reputation got back home before he did.

Until that moment, one of the few unusual things that his neighbors noted about Jesus was that he had never married. John the Baptist or the Essenes could have been his models for celibacy, but Jesus didn't adopt John's austere lifestyle or the separated, communal life of the Essenes. Biblical scholar José Antonio Pagola suggests that Jesus remained celibate because his passion for the reign of God required all his emotional energy.

Historical data suggests that Jesus was close to 30 years of age when he began his public ministry. That was about an average lifespan in his time, indicating that he was at least middle-aged when he began this phase of his vocation. His family and friends must have wondered what had happened, what caused the conversion that led him to the mission he announced in the synagogue at Nazareth.

Jesus' announcement, short as it was, gives us the interpretative key to the rest of his life. The first line sets the tone for everything that would come: "The Spirit of the Lord is upon me."

Perhaps more than other evangelists, Luke emphasizes the Spirit's movement in Jesus and in the life of the people. We have already heard of the Spirit's involvement with Jesus' conception and birth. The Spirit descended on Jesus at the baptism and led him to the desert. Throughout his life, every one of Jesus' actions and decisions flowed from what he believed the Spirit was leading him to do.

By quoting Isaiah and identifying with the anointed one, Jesus might have been referring to expectations about a coming Messiah. What we should note is that Jesus does not simply say he has been anointed, but that he was anointed for the purpose of bringing glad tidings to the poor. From the beginning, he avoids being proclaimed as the Messiah and describes his mission as being sent to bring glad tidings to the poor.

This theme, begun by his mother in her Magnificat, remained a core characteristic of the Gospel. The Spirit of God leads Jesus to minister to the poor, and to call his followers to do the same. This will be his definition of what it means to be Messiah.

Jesus chose this passage from Isaiah to explain who he was called to be and what he intended to do. He would carry it out in relationships with people from all strata of society, by healing, preaching, forgiving, teaching and calling others to follow him. He did not demand that all his followers become impoverished or itinerant preachers. He did demand that they put others first, stop vying for first place and serve people on the margins and he knew they could do so in a variety of ways.

This brings us to Paul's famous passage about the body of Christ. Neither Paul nor Jesus expected that all who would be Christian should be and act or even worship in the same way. In fact, Paul emphasizes the vital importance of diversity. As he says, each is a part of the body of Christ, gifted by the Spirit to bring something unique to the world. This applies to individuals as well as communities and cultures.

Today's liturgy invites us first to contemplate Jesus in his own discernment and acceptance of his vocation — his developing identity. Then, aware that every vocation grows and changes, we are invited to ask the Spirit to continue to reveal our path to us. Doing that will lead us to recognize the gifts we have been given and how to use them. In the end, in different languages and through different activities, each of us who follow Christ are invited to live the truth that, "The Spirit of the Lord is upon me and has anointed me to bring glad tidings to the poor."