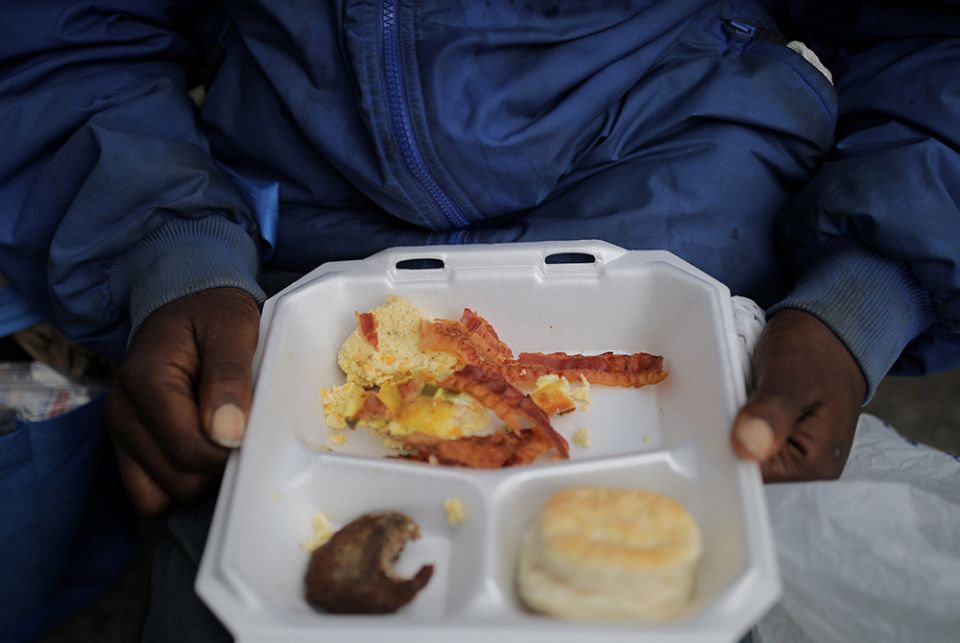 A homeless person in Birmingham, Alabama, eats breakfast during the distribution of food and clothes April 18, 2020. (CNS/Reuters/Carlos Barria)

My mom used to fight back tears every time she heard of young men going off to war. Their situation recalled her experience of being the mother of a four-month-old baby who watched her uniformed husband board a hospital ship during World War II. The sight of young soldiers kept alive her memories of the long years she spent waiting for my dad's return. Although she was never an anti-war activist, her sympathetic imagination led her to mourn the dead and wounded of all sides as if they were her own.

In an article entitled, "Why Are the Poor More Generous?" psychoanalyst Ken Eisold explains that people are naturally more compassionate to those with whom they can identify. Thus, the poor understand and can sympathize more with their companions in struggle than can the better-off who have not known the same level of need or desperation. The explanation might be deepened if we consider the idea that the generous response of the poor implies an understanding of our shared vulnerability.

We see this dynamic played out in the story of the widow who helps Elijah. When the widow meets him, Elijah is a refugee fleeing both a drought and political danger. At first blush, it seems odd that he would ask help from one of the most helpless people around, but God had informed him that there was a widow prepared to assist him. Thus, Elijah asked her for water and then boldly added a bite of bread to his order.

That was the woman's cue to let him know how much he was asking. Obviously, as a man — even though a foreigner — he had greater survival potential than she. But, rather than refuse him, she exposed the absolute bleakness of her situation: she was preparing the last meal she expected that she and her son would eat.

The woman's combined desperation and generosity were the cue for Elijah's prophetic announcement: "The jar of flour shall not go empty, nor the jug of oil run dry." Elijah's promise was that the woman had exercised her power to create a world of solidarity in which the hungry would be fed and the widow and orphan protected.

Did Elijah find a job and help her? Did the flour and oil miraculously reproduce itself? Did neighbors get in on the act? The author doesn't tell us — perhaps so that we could wonder about all the possibilities. What is clear is that the widow was willing to share with a stranger in need and that as a result, they all survived.

The nameless widow of Zarephath was really nothing like the widow of today's Gospel. The first freely offered what she had to a fellow person in need while, according to Jesus, the second was duped by slick pretenders skilled at bilking the innocent. Whereas Elijah invited his impoverished hostess into a shared experience of divine providence, the status-seeking religious leaders sought nothing but their own fame and fortune.

The message of today's readings is really quite simple. We are called to ask ourselves whose interest motivates us. Elijah's widow friend did not share his religious beliefs, but she understood that human beings are made for one another and that even hunger is easier to bear when shared. When Jesus called attention to the temple widow, he emphasized the otherwise unnoticed largess of her giving. He did not call her blessed or say that others should follow her example, but simply pointed out that there is more than one scale on which to measure the value of what a person offers. In terms of offering sacrifice, the widow did more than any of the wealthy or religious authorities who loved broadcasting their supposed bounteousness.

Ironically, the temple widow is not so much an image of discipleship as she is an image of Jesus himself. Like him, she received little positive attention from the "people who mattered." Like him, she was free enough to give her all — whether or not it would be appreciated. Jesus may have drawn attention to her precisely to remind his disciples that the reign of God operates on an alternative scale of values — one that demands the inexplicably courageous faith and solidarity.

The widows of today's liturgy invite us to ask ourselves how we can allow our experience to lead us into solidarity. Rich or poor, we are all vulnerable, even if we are not courageous enough to admit it to ourselves. In the long run, our pretensions make us far more fragile than our weakness or poverty. When we accept our own neediness, we can discover the generous love that makes others' needs our own. With that, we will be part of creating that atmosphere of solidarity known as the reign of God.

Column | Thirty-Second Sunday in Ordinary Time: We are all vulnerable

Solidarity is the antidote to selfishness, exploitation, pope says