COVID-19 virus puts a spotlight on inequality and racism 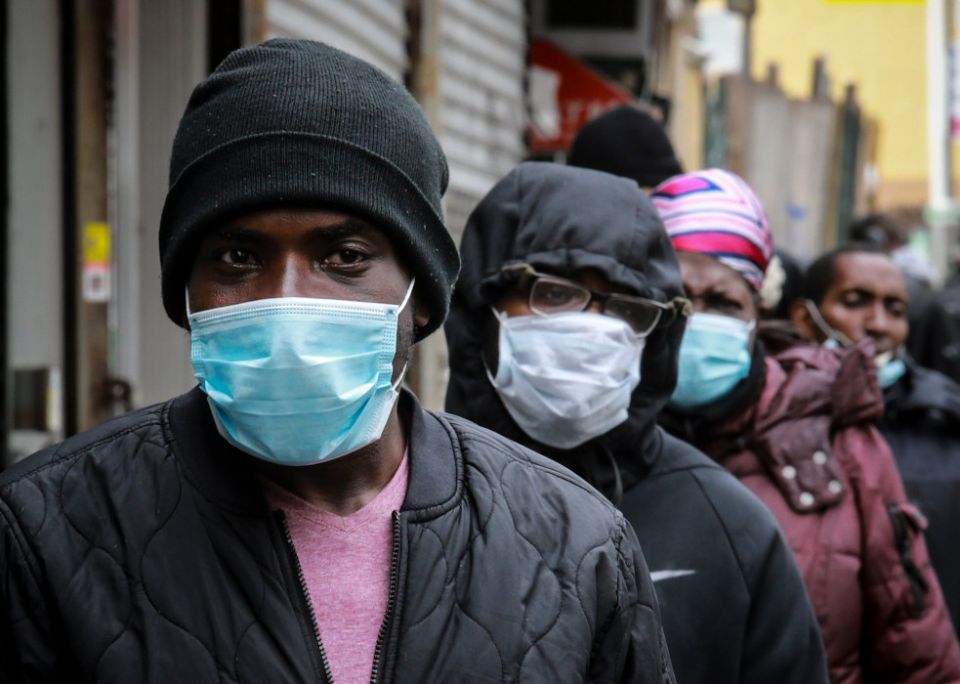 People wait for a distribution of masks and food from the Rev. Al Sharpton in the Harlem neighborhood of New York, after a new state mandate was issued requiring residents to wear face coverings in public due to the COVID-19 coronavirus, Saturday, April 18, 2020. "Inner-city residents must follow this mandate to ensure public health and safety," said Sharpton. The latest Associated Press analysis of available data shows that nearly one-third of those who have died from the coronavirus are African American, even though blacks are only about 14% of the population. (AP/Bebeto Matthews)

While the coronavirus is an equal opportunity killer, the poor and people of color are disproportionately suffering and dying from COVID-19. These communities were least prepared to respond to the virus for reasons rooted in racism and inequality.

When the virus arrived, public health experts told us to protect ourselves by working from home, keeping social distance, isolating the sick and quarantining those who have come into contact with the sick. But all of these recommendations are easier for white, affluent suburbanites to follow. They have large homes they share only with family, and jobs that can be done online. Their financial reserves can cushion the impact of hard times.

Many of these workers survive from paycheck to paycheck with meager reserves to withstand the loss of their paychecks. About 1.8 million workers are paid the federal minimum wage ($7.25 per hour) or less, according to the U.S. Bureau of Labor Statistics. Nearly half (48%) of workers earn less than $15 an hour. In bad times, they have hardly anything to fall back on. Nearly 70% of Americans have less than $1,000 in savings, according to GoBankingRates.

Also, poor people of color are more likely to suffer from underlying conditions that put them more at risk if they do get sick. Sadly, many have either no health care or substandard health care, especially in states where Republican governors and legislatures have refused to expand Medicaid as proposed under the Affordable Care Act. Undocumented immigrants are afraid to go to hospitals because they fear federal agents will seize them there, and deport them or their family members.

These people were already on the edge. With the coronavirus they are in free fall with no end in sight.

Not only are they in danger at work, they are also at risk at home. Minorities and the poor are more likely to live in crowded quarters. They are more likely to have a family member who will bring the virus home from work. The idea of isolating or quarantining someone in an apartment with six or more people and one bathroom is a cruel joke.

We should not be surprised that African Americans are 2.4 times more likely to die from COVID-19 than whites, according to APM Research Lab.

The black community's disadvantage can be traced back to slavery and the racism that blacks have historically endured. If African Americans had ever received just wages for their work, had been allowed to borrow money from banks, open businesses and own homes, then over generations their wealth may have equaled that in the white community.

Instead they were discriminated against, redlined, excluded from education and subjected to violence. Government programs in the postwar era that helped whites gain education and housing excluded blacks. Only within the last 50 years have things slightly improved, but to think that a people can overcome centuries of oppression in one generation is naive.

The next generation continues to suffer because schools have closed. People of color are less likely to have broadband available in their homes for distance learning. Nor do they have a quiet room where they can study. Nor do their parents have the time or ability to make up for what their children are losing by not going to school.

The virus has also undercut the greatest resource available to the poor and communities of color: grandparents. Children and parents are forced to keep distance from their most important supporters. Those who provided advice, emotional support and child care are unavailable.

True, many of those who lost jobs have been helped by unemployment insurance. Some are receiving more in unemployment insurance than they did while on the job, but this simply highlights how terrible were their wages to begin with. And those who have continued working have rarely received hazard pay to reflect that they are putting their lives at risk every day they go to work.

The COVID-19 virus has put a spotlight on the inequality and racism that are endemic to our nation. The health of the nation must be measured by the health of those who are least advantaged. Unless all are healthy, unless all are protected, unless all have access to jobs with decent pay, then we are a sick nation in need of strong medicine.

The pandemic has revealed the need to raise the minimum wage to $15 an hour. It has shown that our education system is still separate and unequal and will continue to be that way until the amount of money spent on educating children of color equals that spent on white children. It has shown the need for universal health care that protects everyone, not just those with good jobs.

America is experiencing a health crisis, but the pandemic has also spotlighted the moral crisis that afflicts our country. Until we care for all God's children, we will continue to be a nation that is sick in its soul.

Column | COVID-19 virus puts a spotlight on inequality and racism