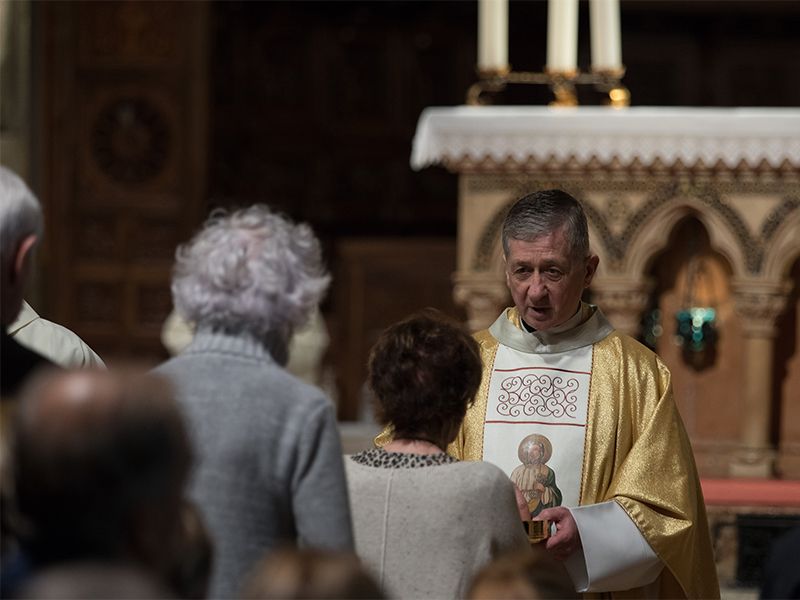 The Catholic Church needs to learn about married life from the faithful, said Chicago Cardinal Blase Cupich in an important address at the University of Cambridge. He is not saying this from a desire to water down church teaching but from theological conviction.

If we accept that, said Cupich, "then no family should be considered deprived of God's grace." As a result, "Our ministerial approach should begin with the understanding that families are not problems to solve," he said. "Rather, they are opportunities for the church to discern with the aid of the Spirit how God is active in our time and what God is calling us to do here and now."

In his address sponsored by the university's Von Hügel Institute for Critical Catholic Inquiry, Cupich makes a significant contribution to the international debate over "Amoris Laetitia," coming down strongly on the side of Pope Francis, who has been severely criticized for opening the possibility of divorced and remarried Catholics being admitted to Communion. The cardinal even quotes from Vatican II's "Dogmatic Constitution on the Church," which calls for religious submission of mind and will to the magisterium of the pope.

Cupich believes that the apostolic exhortation presents a new paradigm that calls us to embrace a new spirit, a change of direction in the way the church carries out its ministry to families.

Francis, according to Cupich, has introduced a set of six hermeneutical principles that force a paradigm shift, allowing us to re-envision the church's engagement with couples and families.

The first principle is "The Family is a Privileged Site of God's Self-Revelation." If we really believe that, then the church must move away from presenting an abstract and idealized presentation of marriage. "The task of those who minister to families," he explained, "is to open their eyes to see, and to help families discern where God is calling them."

God's self-revelation is not restricted only to those who meet the church's marital ideals. God can also be present in irregular situations, including those divorced and remarried. Cupich argues that although this is a paradigm shift for those who minister to families, it is a shift "holistically rooted in Scripture, tradition and human experience."

The first interpretive principle leads directly to the second. "Because families are a privileged place of God's self-revelation and action in the world, there needs to be a shift in the way the church's ministers interact with families and married couples. It should be marked by a mutual respect for the movement of the Spirit. Ministers must accompany families in a process of discernment."

In other words, the church must not just teach; it must also learn from families. All must "remain open to the possibility of learning from one another in seeking to understand the mystery of God together."

Cupich argues that this is what Francis means by a "synodal" church. It means "rejecting an authoritarian or paternalistic way of dealing with people that lays down the law, that pretends to have all the answers, or easy answers to complex problems, that suggests that general rules will seamlessly bring immediate clarity or that the teachings of our tradition can preemptively be applied to the particular challenges confronting couples and families."

"The core goal of formal teaching on marriage is accompaniment, not the pursuit of an abstract, isolated set of truths," he asserts. This accompaniment "involves a process of listening and learning, that guides the faithful to an awareness of their situation before God."

Cupich argued that "This represents a major shift in our ministerial approach that is nothing short of revolutionary."

Mutual respect in discerning the movement of the Spirit in the process of accompaniment opens up to the third shift on the role of conscience. Conscience is not just about recognizing past sins or recognizing objective truth in the present, it is also about discerning the future — What is God asking of me now?

Cupich quotes Vatican II's "Gaudium et Spes," which describes conscience as "the most secret core and sanctuary of a man … (where) he is alone with God, Whose voice echoes in his depths." If we take this seriously, says Cupich, it "demands a profound respect for the discernment of married couples and families. Their decisions of conscience represent God's personal guidance for the particularities of their lives." The voice of conscience is the voice of God.

"It is hard to overstate the significance of this hermeneutical shift," says Cupich. "By fully embracing the understanding of conscience found in 'Gaudium et Spes,' Pope Francis points not only to the possibility of accompaniment in the church's ministry with families but also to its necessity."

The fifth paradigm shift is recognizing that when dealing with particular cases, a pastoral — and not merely doctrinal approach — is needed.

"As pastoral discernment attends to the reality of a situation," Cupich told his audience, "the conscience based Christian moral life does not focus primarily on the automatic application of universal precepts. Rather, it is continually immersed in the concrete situations which give vital context to our moral choices."

This shift towards a pastoral approach involves creating a culture of care, hospitality and tenderness in the parish community on behalf of those who have been wounded.

This final shift is the result of resituating mercy at the heart of the gospel to the point that "we should always consider 'inadequate any theological conception which in the end puts in doubt the omnipotence of God and, especially, his mercy,' " said Cupich, quoting Francis. This is the heart of Cupich's sixth principle. "Doctrinal development is about remaining open to the invitation to see our moral teachings on marriage and family life through the lens of God's omnipotent mercy."

Although he calls these paradigmatic shifts "revolutionary," they are not "new" but "revivified," according to Cupich. Francis "does that by connecting tradition and experience, teaching and practice in a way that better responds to the realities people face in their daily lives."

Cardinal Cupich's address is a substantial contribution to the understanding of "Amoris Laetitia," probably the most widely debated papal document since Pope Paul VI's "Humanae Vitae," which forbade the use of artificial contraception. He with Francis is calling on the church to take the laity seriously and listen to the Spirit active in their lives, especially in their families.

Column | Cupich speaks: The church must learn from the faithful about married life

In Puerto Rico, much work to do and much suffering remains, says cardinal

What I learned from organizing, participating in Boston's 'Amoris Laetitia' event