New cardinals: The men are the message 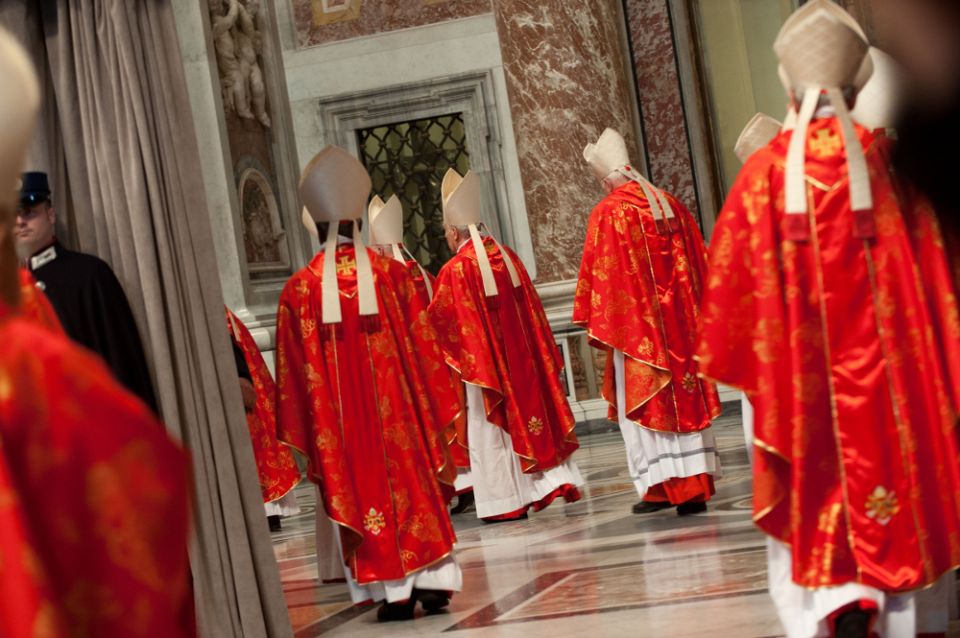 In announcing the appointment of 10 new cardinal electors, Pope Francis has improved the possibility that the next pope will continue his policies, but their appointments have also sent a message to the church about what should be the priorities of its leaders.

Second, cardinals are very influential in their parts of the world. Someone in a red hat sticks out in a crowd. We see this in the United States, where politicians and the media pay more attention to cardinals than to the elected president of the U.S. Conference of Catholic Bishops, who is the official spokesman for the U.S. bishops.

Cardinals can play an extremely important role in countries where there is conflict and poor political leadership. What cardinals say can have an impact on public policy and on the life of the church.

In short, by making these men cardinals, the pope is handing them megaphones. He wants their voices heard above the crowd of thousands of bishops in the church. He wants them brought to the notice of the 1.2 billion Catholics in the world. In the appointment of these new cardinals, the men are the message.

All of the new cardinals have experience in working on issues close to Francis' heart: refugees, migrants and the poor; interreligious understanding and cooperation; reconciliation and peace building; evangelization; concern for the environment.

Jesuit Fr. Michael Czerny is a perfect example of this.

The 73-year-old Czerny is the pope's point man and policy adviser on issues dealing with migrants and refugees. Many also believe Czerny was a principal drafter of the pope's encyclical on the environment, "Laudato Si', On Care for Our Common Home."

Before focusing on migrants and refugees, Czerny was involved in caring for those afflicted with AIDS in Africa, although many activists were disappointed by his opposition to the use of condoms during the papacies of John Paul II and Benedict XVI.

Even as a simple priest, those in-the-know were paying attention to Czerny because they knew he was close to Francis. Now, as a cardinal, he will be impossible to ignore. Being a cardinal grants Czerny access to the highest levels of governments and gives him a large megaphone to proclaim the pope's concern for migrants, refugees and the environment.

Other appointees also reflect the pope's concern for the poor and marginalized.

Bishop Alvaro Ramazzini Imeri of Huehuetenango, Guatemala, made reaching out to indigenous people an important part of his ministry. The 72-year-old is also known for taking on big corporations, especially mining companies, that exploit the resources of indigenous lands. His concern for human rights and the environment has earned him death threats, but they reflect the goals of Francis.

Archbishop Matteo Zuppi of Bologna is known as a bishop for the poor. As a member of the Community of Sant'Egidio, he showed this concern for the poor both in Italy and beyond. With that community, the 64-year-old was involved in peace negotiations in Mozambique, one of the countries Francis recently visited.

The pope's concern for interreligious understanding, especially with Muslims, is also a major focus of some of the new cardinals.

Archbishop Miguel Ayuso Guixot, the 67-year-old president of the Pontifical Council for Interreligious Dialogue, has been involved in dialogues most of his priestly life. The quiet prelate is both an academic and a diplomat. He was involved in mending relations between the papacy and Al-Azhar, the Egyptian university and center for Sunni scholarship, after they were fractured following Pope Benedict's disastrous talk at Regensburg in 2012.

Guixot's elevation, as well as that of retired Archbishop Michael Fitzgerald, was a clear signal to Muslim leaders that Francis is serious about improving relations with Muslim believers. Fitzgerald once held Guixot's job in Rome but was exiled to Egypt by Benedict, who did not like Fitzgerald's approach to dialogue.

The pope also made cardinals of archbishops heading archdioceses in Muslim-majority countries where interreligious cooperation is not easy but must be a way of life. Ignatius Suharyo Hardjoatmodjo of Jakarta, Indonesia, and Cristóbal López Romero of Rabat, Morocco, relate to Muslims on a daily basis. For them, dialogue is not an abstract concept but the only way the church can exist in their countries.

Although a Spaniard by birth, Cardinal-designate Lopez became a Paraguayan citizen and is happily claimed by Paraguay as its first cardinal. But the 67-year-old cardinal designate sees his appointment as a nod to the Kingdom of Morocco, which, he says, has done much to foster moderate Islam.

"The pope conveys a message with each appointment," he told Alfa y Omega magazine. "And I think in this case he is saying: 'I want to promote interreligious and Islamic-Christian dialogue.' He is saying: 'Take heart, minority churches of North Africa, your witness is important, not only for where you are, but for the universal church.' " 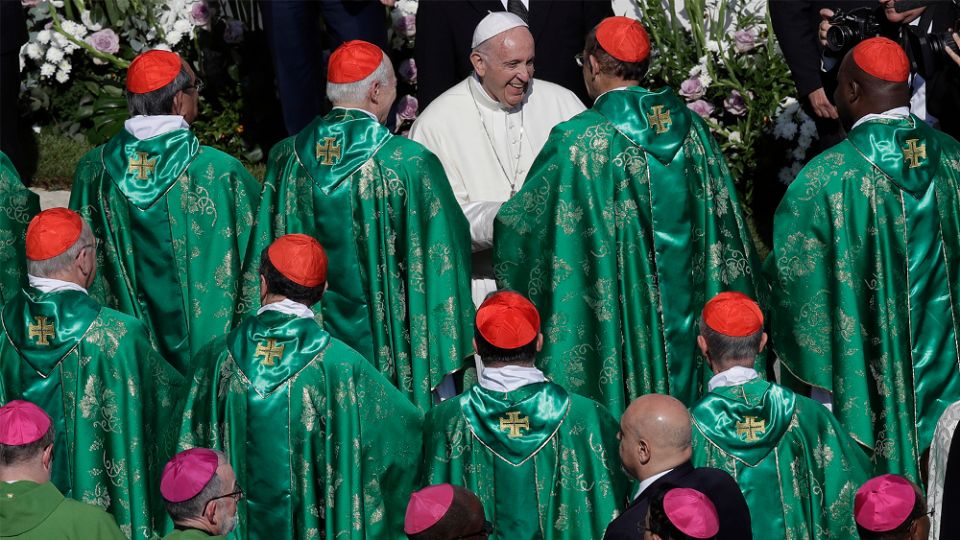 Pope Francis, top, greets cardinals at the end of the opening Mass for the Synod of Bishops on Young People, in St. Peter's Square at the Vatican, on Oct. 3, 2018. (AP/Alessandra Tarantino)

Reconciliation and peace building have also been the focus of Archbishop Fridolin Ambongo of Kinshasa, Congo, where the 59-year-old was a major player in getting the political elites to agree at the end of 2016 to a peaceful transition of power. When President Joseph Kabila reneged on the agreement, the archbishop and his predecessor helped organize protests until presidential elections finally took place. He has continued pushing the government for freer elections, human rights and an end to corruption.

Archbishop Juan de la Caridad Garcia Rodriguez of Havana also has to deal with a troublesome government. The 71-year-old has set an example of innovation in evangelization by recruiting grandparents to teach the faith to a new generation. He was also the founder and director of a school for missionaries in the archdiocese. When Cuba was devastated by Hurricane Ike in 2008, he was active in helping those who lost everything.

He has also played a role outside of Cuba as a delegate to the 2014 Synod on the Family and the 2007 meeting of Latin American bishops in Aparecida, Brazil. Pope Francis, while archbishop of Buenos Aires, played a key role at Aparecida and undoubtedly got to know Garcia well.

Archbishop Jean-Claude Hollerich of Luxembourg is unusual in that he has experience first as a missionary in Japan and now as a leading bishop in Europe. The 61-year-old Jesuit is president of the Commission of the Bishops' Conferences of the European Community and has been a strong voice for European unity at a time of crisis in Europe. Having a former missionary in such a role can be seen as a recognition for the need to reevangelize Europe.

All of these cardinals embody in one way or another Francis' vision for the church.

Finally, there is José Tolentino Mendonça, Vatican archivist and librarian, who as a spiritual director and retreat director helps people find God's path for them through discernment. The 53-year-old is a biblical scholar as well as an award-winning poet, who uses his poetry as a way of bringing contemporary culture and the gospel into dialogue.

All of these cardinals embody in one way or another Francis' vision for the church. Besides giving them a red beretta on Oct. 5, Francis will be giving them megaphones to proclaim his vision of the gospel to today's church and world. But even before the cardinals speak, by selecting them Francis has made them the message.

Opponents of the pope will not like the message. But those who do not like these appointments should remember that almost all of them were made bishops or Vatican officials by Benedict or John Paul.

Column | New cardinals: The men are the message

Pope's quotes: Mercy is not indifferent