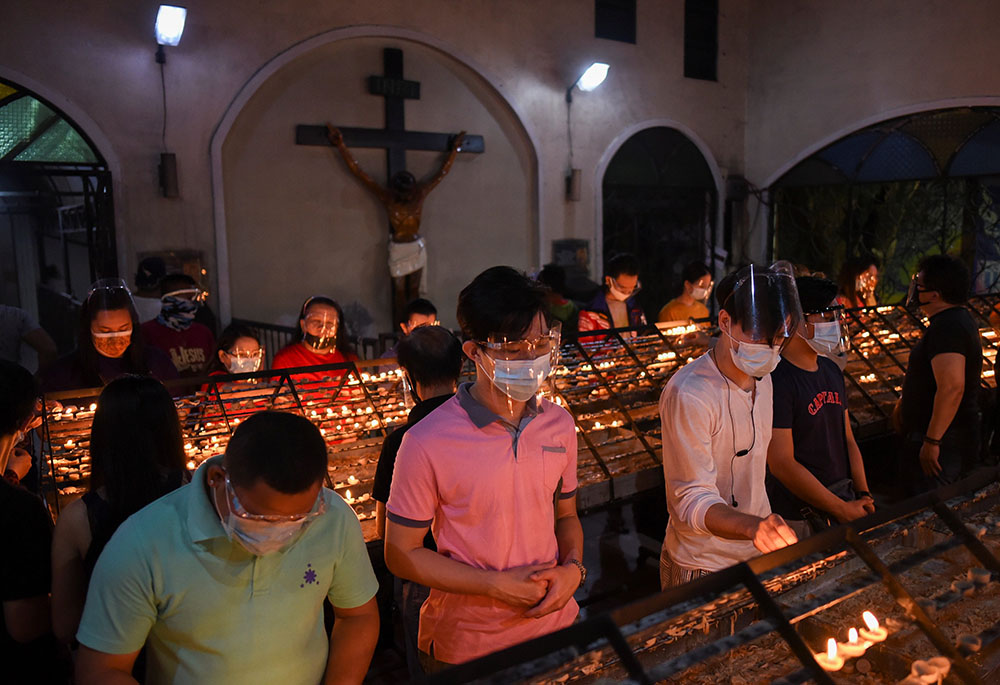 People wearing protective masks and face shields light candles after the first of the nine-day novena Masses for Simbang Gabi at the National Shrine of Our Mother of Perpetual Help in Manila, Philippines, Dec. 16, 2020. (CNS/Reuters/Lisa Marie David)

There's something beautiful and stunning about rising at 4:30 a.m. and walking through the predawn darkness to attend Simbang Gabi, a yearly nine-day Advent novena that began in the Philippines. The novena typically starts on Dec. 16 and runs through Dec. 24. Catholic churches are lit with parol, a star-shaped lantern that originated in the Philippines and resembles the star of Bethlehem, and filled with fast-tempo, vibrant music.

Simbang Gabi celebrations began in the Philippines in 1668 when Spanish missionaries brought the practice from Mexico as part of their evangelization in the country. Spanish priests held early morning, predawn services so that fisherman who finished up their workday late and farmers who were starting their days early could gather for worship.

During this time, along with different faith practices, different agricultural techniques were introduced to help tend to the land during different seasons to yield greater harvests. In An Introduction to Philippine History, Jesuit Fr. José Arcilla writes that the Philippine people were taught to read and write, which helped them read the catechism, and they marked their days with prayers such as the Angelus, which is recited at sunrise, noon, sundown and early evening.

Little by little, times and schedules were marked around Sunday Mass and celebrating certain feast days, like Christmas and Easter. Days were marked by God at the center. Arcilla also points out there were times missionaries couldn't find a Spanish translation for a word in Tagalog (which is one of the main languages of the Philippines) and began replacing words such as Dios for God instead of the Tagalog word Bathala. Slowly, the lifestyle that the Philippine people knew became Eurocentric, oriented around Spanish life and faith.

In Brown Skin, White Minds: Filipino-/American Postcolonial Psychology, psychology professor E.J.R. David explores how this history with colonialism has shaped the lives of Filipinos in the United States, who are currently one of the largest U.S. Asian groups. David explores how European colonialism impacted and continues to impact the Filipino community all around the world, including its impact on how we see ourselves today as Catholics. 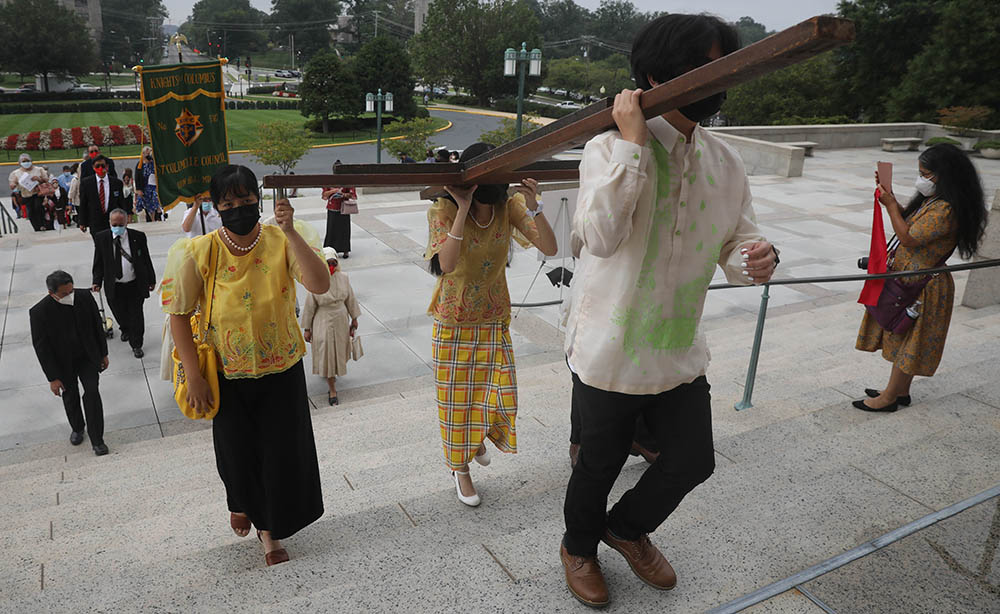 Filipino Catholics carry a cross into the Basilica of the National Shrine of the Immaculate Conception in Washington Sept. 18, for a Mass marking the 500th anniversary of Christianity in the Philippines. (CNS/Catholic Standard/Andrew Biraj)

In the United States, there are more than 4 million Filipino Americans, and 65% of that population identifies as Catholic.

To be Filipino American Catholic maybe means not wanting to disrespect the elders and generations of ancestors who practiced this deep faith for centuries. There is a sense of shame that comes about in our communities when we disrespect elders and start to question a history that spans 500 years.

These are the elders who came to the U.S. with a suitcase, maybe two. These same elders worked in the agricultural fields of the Central Valley in California or perhaps came to pursue science or engineering careers through the 1965 Immigration Act. These elders also used the example of a church community to lift each other up, cook for each other when their community was hungry, or gave money when a community member died.

To be Filipino American Catholic in these times of 2021 means to want to wrestle with a complex and oppressive history, knowing your faith sustains you no matter what. It also can mean to walk away and not want to practice a faith that was shared so aggressively.

These last two years have shown us as a nation that understanding deep oppression in communities and within our society means uncovering a history that at times is fraught with pain, whether it's yours or another's. 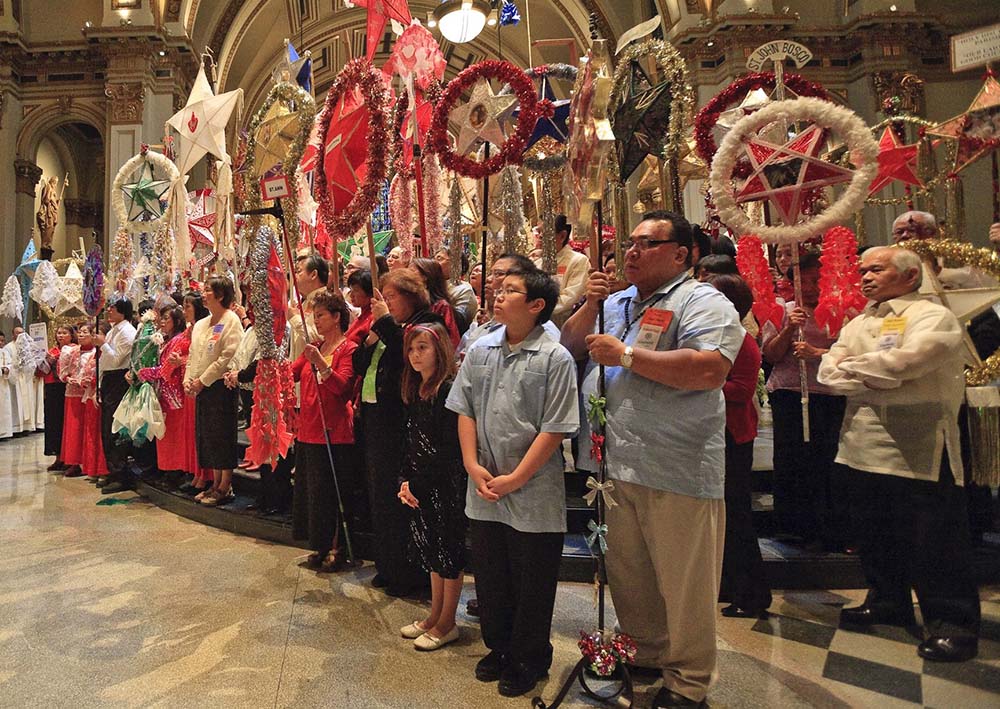 Catholics hold up parol, or Christmas lanterns, for blessing at St. James Cathedral in Seattle during Simbang Gabi celebrations in 2010. (CNS/Mike Penney)

Our history as Filipino Catholics in the U.S. was not something many of us have had the privilege of hearing in our classrooms or religion classes. I can't remember a single image of a parol in my religion books growing up. We didn't talk about it in my Catholic elementary school, which had a large and growing Filipino population in the 1980s in the San Francisco Bay Area. The parol is literally the mark of how we celebrate Christmas and how we as a community lit the path for each other on a darkened street in the pre-dawn hours of Simbang Gabi.

The beginning of questioning Catholic faith as a Filipina American and its history began at an in-depth level for me in the months following the death of George Floyd.

I began reading about Black history and Filipino American history to better understand how we as two collective communities shaped the United States. At times, the history was heavier than expected.

There was a deep desire to decolonize both my mind and the history I'd known for generations. The fiction I was beginning to read by authors whose last names resembled mine spoke to me in a way that Flannery O'Conner and Graham Greene never did.

When we speak about anti-racism or racial equity, a large part of our conversation centers around decolonization. It's an unlearning of what was passed down to you and your community. It's centering the histories and stories that were in place long before people, histories, religions were forced to change.

We as a people are proud of our Catholic faith and the strength it gives us. I wonder what it would be like to also be proud to know of the history of the faith that existed before Christianity.

For Filipino Catholics, Simbang Gabi celebrations are joyous — and an opportunity to wrestle with our complicated history with Catholicism.

What would it be like if we brought up those complicated histories at our salu-salo (family gatherings that include food)? Or maybe around our multigenerational dinner tables sa Pasko (at Christmas)? Our tables are places of prayer — but what about the history for what we pray?

How might we model what it means to hold the tension of Christianity but the deep knowing of a harmful legacy at times with our people? We are a people who believe. Who follow. We build chapels in our shopping malls in the Philippines because Catholicism is deep in our blood. It's important we know and embrace our past even if it's harsh.