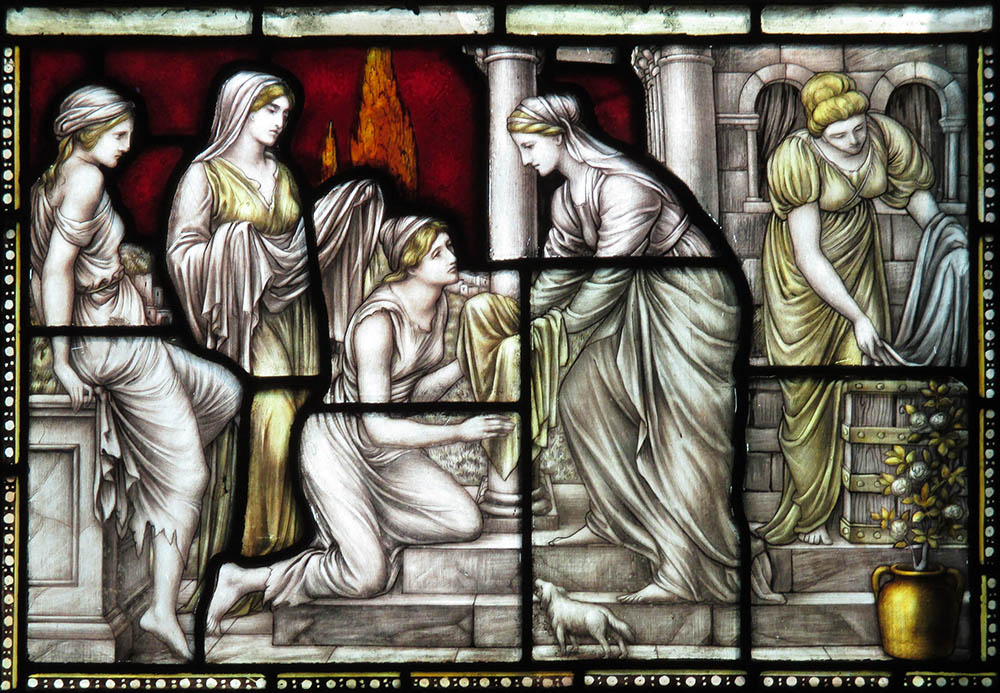 The New Testament figure of Tabitha is depicted in stained glass in St. Michael's Church in Lewes, England. (Wikimedia Commons/Antiquary)

Women's History Month is a great time to celebrate the "mothers" of our Christian church. Until recently, few realized that early female believers shaped our church's future no less than their better-known brothers (aka the "fathers of the church").

On Feb. 14, 2007, Pope Benedict XVI made the rather remarkable statement that " without the generous contribution of many women, the history of Christianity would have developed very differently," and that the female presence was not "in any way secondary."

Some early church mothers are relatively well-known while others are all but forgotten. Early writings and funerary inscriptions testify that women served as prophets, evangelists, missionaries, teachers, deacons, presbyters, enrolled widows, and heads of house churches and monasteries.

Marcella, Paula, Melania the Elder, Melania the Younger and Macrina exercised considerable authority in ancient Christianity. Marcella founded a sort of urban monastery and study group in in Rome that greatly benefited — and benefited from — Jerome's biblical erudition. When Jerome left for Jerusalem in 385, Rome's priests began to seek out Marcella for help in understanding the biblical texts.

Paula financed and oversaw the building of two monasteries in Bethlehem, one for women and one for men. This is where, thanks to Paula's financial support, Jerome completed his translation of the Greek Bible into Latin. Jerome tells us that Paula's expertise in Hebrew exceeded his own.

Melania the Elder publicly reconciled 400 schismatic monks in Asia Minor, and her spiritual wisdom and authority led to the repentance of the renowned monastic writer Evagrius.

Melania the Younger publicly countered Nestorianism at the court in Constantinople, and Macrina's authority as a spiritual director had a profound influence on her theologian brothers, Basil and Gregory, who went on to craft the doctrine of the Trinity. 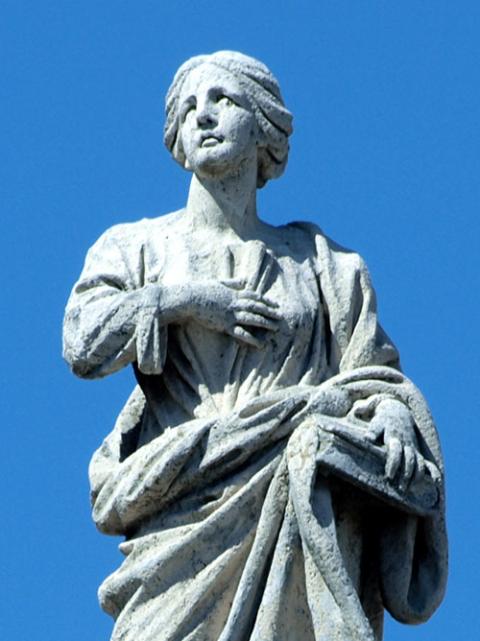 St. Macrina on the colonnade of St. Peter's Square at the Vatican (Wikimedia Commons/AlfvanBeem)

In her fourth-century travel journal, Egeria ecstatically greets her "very dear friend," the deaconess Marthana in Seleucia (Turkey), who governed (regebat) a double monastery of women and men at the shrine of St. Thecla. Here we see a rare fourth-century example of a female deacon exercising governing authority over Christian men as well as women. Macrina also seems to have governed both men and women at her monastery in Cappadocia.

Proba is another prominent — albeit nearly invisible — church mother. A wealthy, well-educated wife and mother of sons, Proba adapted a popular poetic form — the Virgilian cento — to highlight the heroism of Jesus and attract aristocratic young men to the faith. Her literary and biblical authority created a remarkably effective cross-cultural evangelizing tool that would influence Christian men and women for generations.

Tabitha of Joppa and Grapte of Rome are two important but barely known church mothers from the first and second centuries.

Widows played an important role in early Christian expansion. They supported the church's mission as financial patrons and converted others to the Jesus movement. The support of wealthy widows for poorer widows and orphans was a powerful evangelizing witness in a culture that regularly exposed unwanted babies to die.

In Acts 9:36-43, we read of Tabitha, "a disciple" who led a house church in Joppa, just 30 miles northwest of Jerusalem. She fell ill and died, leaving "all the widows ... weeping and showing tunics and other clothing she had made for them" (Acts 9:39). Luke shows Peter hastening to Joppa where, after he prays over her, Tabitha is raised from the dead.

Because she is the only woman given the grammatically feminine title of "disciple" (mathetria) in the entire New Testament, some commentators suggest Tabitha was one of the women in Jesus's Galilean discipleship. Peter may have known her well.

Since no male relative is anywhere in evidence, Tabitha was probably a widow herself. Biblical scholars suggest she was a leader of a congregation of widows at Joppa and a foremother of the "order of widows" prominent in the church into the third century.

And then there is Grapte of Rome. In the second century, the author of an important Christian book, The Shepherd of Hermas, writes that Hermas had a vision in which he was told to write "two little books and send one to Grapte and one to Clement." Grapte must "instruct the widows and the orphans," and Clement is to send the other book "to all the foreign cities." Hermas is also asked to read the book "to this city [Rome] along with the elders that preside over the Church."

Clement is remembered in church history as a leader and communicator for the other house church leaders of Rome. Since Rome did not embrace a monarchical episcopacy as quickly as other urban communities, Clement's letter was sent to Corinth on behalf of all the house churches of Rome, not on his own behalf.

The Roman church was not led by a monarchical bishop at this time but by what scholar Peter Lampe has called a "plurality of presbyters." It is notable that the Shepherd of Hermas sharply reprimands Rome's diakonoi (male deacons?) who "despoil the living of widows and orphans," in contrast to Grapte who cares for and ministers to them. As Lampe sees it, Grapte "was entrusted with this work by all the communities of Rome."

Both Grapte and Clement are identified as leaders whose responsibilities involve all the faith communities at Rome. While Clement is remembered in church history, Grapte is not.

Many early writings attest that for early Christians, care of widows and orphans was an ethical priority. What is less obvious is that this ministry was often, if not usually, carried out by women. A pattern emerges in which we find wealthier widows caring for other widows and, like Tabitha, welcoming them into their households. This pattern persists well into the fifth century.

Communities of widows, including the "widows called virgins" — named by Ignatius of Antioch in his second-century letter to the Smyrnaeans — became centers of evangelization and hubs of female leadership.

It is nothing short of inspiring that these "mothers of the church" exercised authority at a time when the "fathers of the church" forbade women to speak or teach publicly, preferred that women stay at home and judged women more susceptible to heresy than men.

Yet Christian women did not keep silent or remain enclosed. They spoke up about important ecclesial issues, served the marginalized, taught both men and women, and witnessed freely about the Christ with whom they had thrown in their lot. They are great role models for the women and men of today.

Mothers of the church, presente!