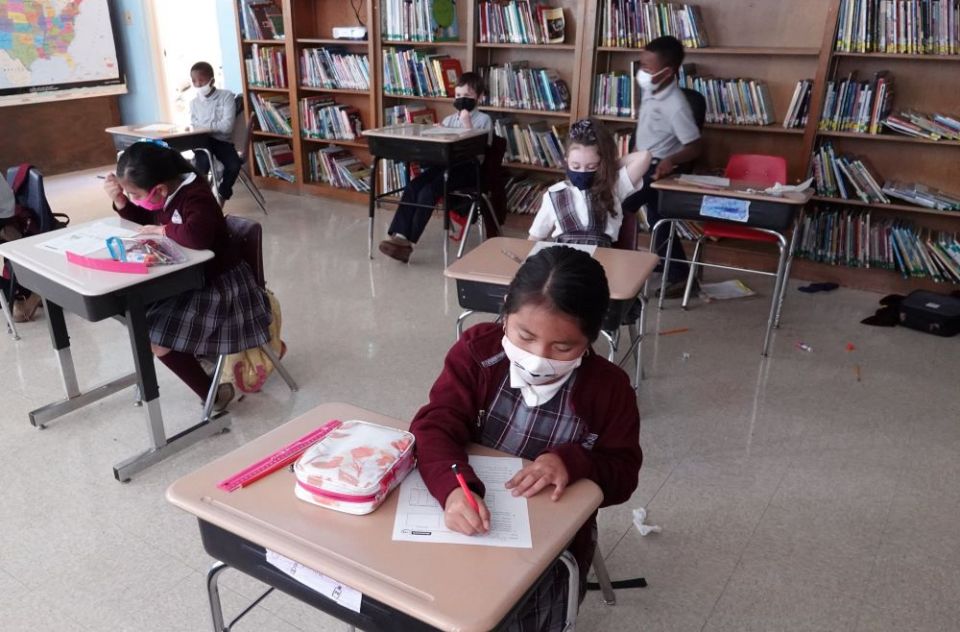 Even before yet another coronavirus variant arrived in the United States, some parents had been expressing concern about the safety of unvaccinated children at Catholic schools and parishes across the nation.

Krista Scott resides in the Cincinnati diocese, where the mask mandate was lifted in June when the Ohio bishops restored the obligation to attend Mass. In parishes, as per the diocesan website, eucharistic ministers were required to use hand sanitizer, and Communion from the chalice was forbidden. But the decision to mandate masks was left to individual parish priests.

"That puts the priest in a terrible position," Scott said. "They have to choose which voices are the loudest and go with them — or do what they believe is right and deal with the drama."

She felt the priest at her former parish had done his best, but "unfortunately, encouraging people to do the right thing is not enough."

Scott and her husband thought others in their parish were not masking responsibly. For a while they took turns going to Mass and staying home with their younger, unvaccinated child, until they found a chapel that mandated masking. "We felt completely safe and grateful for our option to be together as a family," she said. "We may decide to become members of this parish and it will be largely because of COVID policies."

'We may decide to become members of this parish and it will be largely because of COVID policies.'
—Krista Scott, Cincinnati diocese

For Scott, it was frustrating to see secular groups doing a better job protecting her children than Catholics were.

"It's maddening that our girls go to a secular co-op, secular dance lessons, dentist and doctors' appointments, even to their favorite bookstore and for haircuts — and all of those places show more love and care for their well-being than the church, God's representatives here on earth," she said. "It makes me question if those places who claim to care about their spiritual well-being can possibly do so if they're so cavalier about playing with their lives."

Now that the Pfizer vaccine has been approved for those 5 and older, the risk of children contracting COVID-19 has significantly decreased. But children under 5, especially those with pre-existing conditions, or in areas with high numbers of cases, are still at risk, especially given the spread of the Delta variant. Between early July and early September, pediatric cases of COVID increased by about 240%.

Given this threat to the health and lives of children, one would expect Catholic institutional leaders to make every effort to keep these children, and other vulnerable persons, safe. And some are doing so. But others are making only minimal efforts.

Kris Follmer's family lives in the Minneapolis area. He and his wife decided to remove their children from the parochial school system because they consider archdiocesan policies irresponsible.

Follmer said that initially, in 2020, the school's response to the pandemic had been good. But then things changed.

"About a week before the school year started our school published their guidance for their COVID plan, and when we read it, my wife and I just kind of shook our heads, and I started getting texts and calls from other concerned parents," Follmer said. "My initial thought was why aren't we masking, why aren't we following the guidance of the CDC and the Minnesota Department of Health?"

Asked if he knew why the policies had changed, Follmer was hesitant to speculate.

"I want to stick to facts and be charitable to them," he said. "One of the big things was, when we first sat down with our pastor, he said, 'We want to get students back to a sense of normalcy.' "

Follmer wants to work with people and try to convince them. "But I can’t do that if I can't bring my kids to church, or if I don't think their judgement is healthy enough to make that decision for the kids," he said. "It calls into question all of their judgment on everything else." 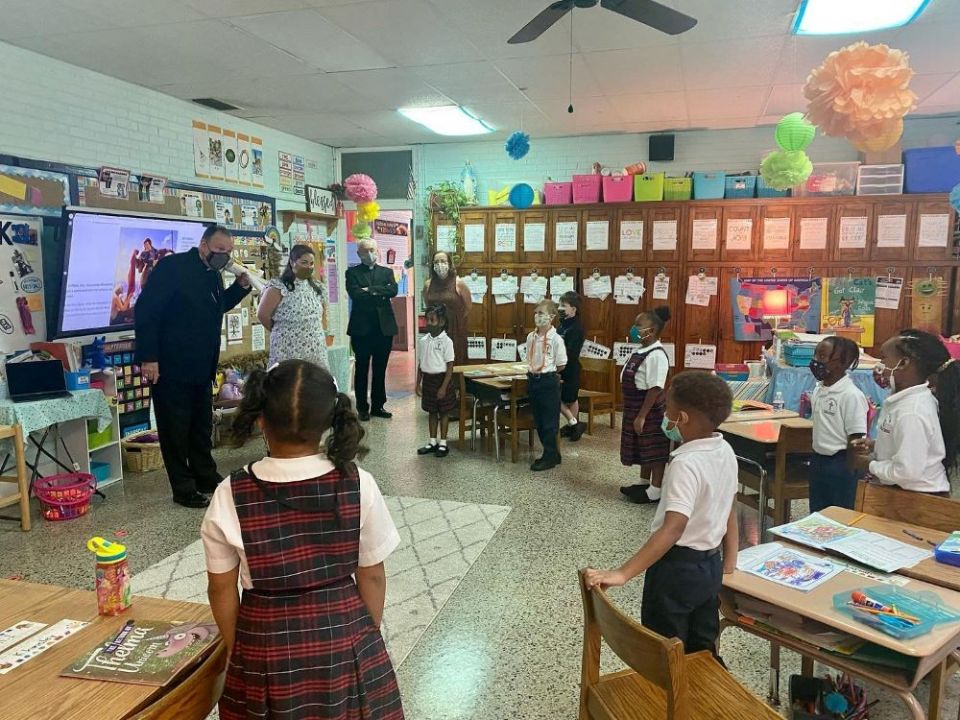 Keith Kurak lives in Cleveland with his wife and children. His family also had difficulty finding a parish where they could be comfortable with the COVID protocols.

"Trying to determine if it was safe to take a family with five children under 12 to Mass was exhausting and full of trial and error," he said. "You have no idea what the culture around masking and social distancing will be until you get there. So, we would send 'advance scout' teams of just myself and later a few older kids, as well, to scope out new churches to see if it was safe."

Shortly before the Sunday Mass dispensation ended in Ohio, they did find a parish where they were satisfied with safety measures. But at other parishes they visited during that time, Kurak said, everyone acted as though the pandemic had ended.

"Pretending the pandemic is over is such a pervasive thing in Catholic circles, that even I second-guessed the precautions I was taking in June when the numbers were so low," he said. "Facing that indifference so frequently in church settings has left me feeling unsafe and not-entirely-welcome even in churches that are actually trying."

In Kurak’s view, it would have helped if the diocese hadn't lifted the mask mandate when they lifted the dispensation.

"It seemed like the diocese just followed the governor in that regard, who was hamstrung by the state congress. From priest to bishop to government, it seemed like everyone was looking for someone higher to say it was OK to ignore COVID," he said. "So it seemed like most churches around here were following orders, not deceiving, but not creating an environment where everyone felt safe. The diocese didn't have much to say about big families full of unvaccinated children, and the priests didn't have much to say, either."

Kurak noted that at the end of August, the diocese did update its guidance, in response to the Delta variant, to "strongly encouraging" wearing masks.

'Pretending the pandemic is over is such a pervasive thing in Catholic circles, that even I second-guessed the precautions I was taking in June when the numbers were so low.'
— Keith Kurak, Cleveland diocese

The Cleveland diocese confirmed that its mask mandate was lifted with the dispensation. As of May 21, masks were no longer required, but were "strongly suggested for those who have not yet received the COVID-19 vaccine or are otherwise vulnerable," said Deacon James Armstrong, executive director of communications.

He also confirmed that masking was strongly encouraged after Delta began to surge, and said he knew of at least two parishes that mandate masks.

For some adults affiliated with Catholic schools, however, the threat of having to mask is more alarming than the dangers of COVID-19. In October 2020, Resurrection School in Lansing Michigan, along with two school parents, brought a lawsuit against state officials that were mandating masks.

The court ruled on behalf of the state in the case, but the school went forward with the case anyway. It was shot down again by the Sixth Circuit U.S. Court of Appeals this August. Then in November, the full appeals court agreed to look at the case again, since the school's attorneys argue that the panel of judges that reviewed the case in August applied the wrong legal standard.

The lawsuit claimed “the state mandate contradicted what the school emphasizes: that ‘every human has dignity and is made in God’s image and likeness.’”

It also said that "a mask shields our humanity. And because God created us in his image, we are masking that image."

According to the lawsuit, "'science and data do not support this message or the mask mandate' and that a mask wearers [sic] is showing that one has 'surrendered his or her freedom to the government.' "

If wearing a mask has become symbolic, there is disagreement over what it symbolizes. For some, refusal to mask conveys indifference to the safety of children.

Mary Ann Dorsett, who resides in Des Moines, has been involved in an ongoing fight with both governmental and diocesan institutions regarding COVID-19 safety precautions. Dorsett has been especially concerned about the safety of her grandchildren in diocesan schools.

At the beginning of the pandemic, when Iowa Gov. Kim Reynolds failed to issue mandates, Dorsett and others protested outside the governor’s mansion. "It was a fool's errand," Dorsett said. "We did it because we felt better doing something rather than nothing, as Iowans died."

Then in May 2021, rather than instituting more safety measures, Reynolds went the opposite direction and signed a law prohibiting cities, counties and school districts from enacting mask mandates.

In September 2021 U.S. District Court Judge Robert Pratt, siding with concerned parents of children with disabilities, blocked the governor's prohibition. However, according to a Sept. 22 letter from Bishop William M. Joensen, "the temporary injunction that allowed for local control only addressed public school districts, and therefore did not provide Catholic schools relief from the original law."  However, some non-Catholic private schools in the state have interpreted the injunction differently and issued mask mandates anyway.

Dorsett says she has continued to contact members of the diocese by phone and email as well as protesting for a few weeks in front of the chancery, to no avail.

NCR reached out to the Des Moines diocese for confirmation but received no response.

For Dorsett and her family, the "sense of betrayal" from her fellow Catholics has been especially devastating.

"How can a bishop be avidly pro-life and not protect children from disease and death?" Dorsett wrote. "After a very nasty history of priests abusing children and the bishops failing to protect them, how do they dare ignore a chance to protect them now?"

Catholic schools in US hit by unprecedented enrollment drop