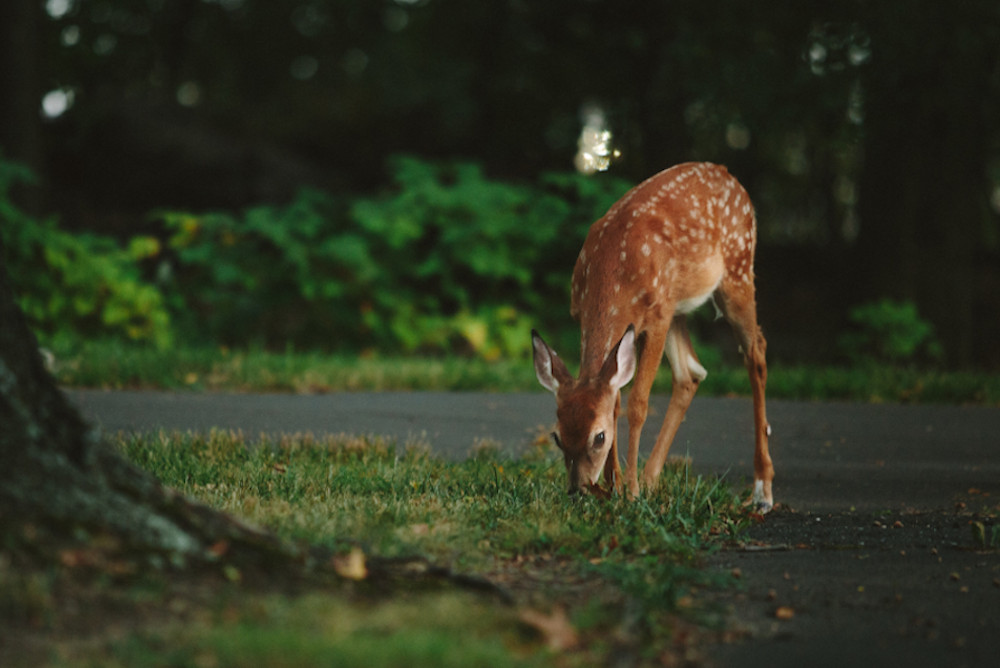 The deer appeared out of nowhere, two of them. One stood on the highway's center line and the other stood about four feet in from the shoulder, perfectly in line with my front bumper. With only three seconds to spare, I decided my best option was to take my foot off the gas pedal and pray that they would move. The first one dashed away, the other smacked with a thud against my passenger side.

Earlier that week, I had actually thought twice about whether I should make the four-hour drive home to Chicago across the backroads of Indiana. It was a long drive, but I'd gain an hour with the time zone change, and I'd get to sleep in my own bed. When making those decisions, no one ever plans on hitting a deer.

I pulled over to the side of the road with flashers on, headlight dangling at a strange angle, and a terrible noise emerging from my front tire. It was pitch dark, but otherwise, a clear fall night. I stared at my phone trying to decide who to call. I was 156 miles from home.

Carl, a diocesan partner, had been at the same meeting that night, and I knew he was driving that same stretch of dark highway. He picked up the phone on the first ring. We figured out that he had likely passed me shortly after I hit the deer. He turned around and headed back my way.

When he arrived, we pulled the front bumper away from the tire, which thankfully was still intact, and checked under the hood. The car appeared to be drivable despite the crushed headlamp.

Carl offered to follow me for the next hour before we went our separate ways, where he would take the turnoff to South Bend, while I continued home to Chicago. "Or you can always stay with us," he offered. With two of their four kids away at college, there was no shortage of spare bedrooms and clean sheets.

In a fleeting moment of clarity, I could hear the tiny whisper of the Holy Spirit reminding me that there are no bragging rights for ending up dead in a ditch somewhere. My stubborn independence was not going to serve me well in this moment. It was better to play it safe and drive the rest of the way home in the daylight.

In hindsight, I felt so lucky. It could have been much worse. The impact was minimal enough that the airbags never deployed. I was emotionally rattled, but not physically injured. (And by the looks of it the deer ran away unscathed!) Furthermore, I had not expected Carl to be at this meeting. It was his wife's birthday, and he had rearranged his schedule to take her out to lunch, then made time for this evening meeting on the far side of the diocese.

As a single lay woman and frequent traveler, I've learned to expect the unexpected and to be open to the mysteries of God's grace. As we arrived at Carl's house, his wife Marie asked if I'd like something to eat, and she immediately opened a bakery box full of treats. I'm never one to turn down homemade pastries, except that I've developed a gluten sensitivity in recent years. As my mind raced to politely decline, she pointed out several gluten-free options. God's grace appears in the tiniest details (and tastes like comfort food).

Several times, Carl remarked about how calm I appeared. "You're handling this really well! You hit a deer, and now you're standing in a stranger's kitchen." It's true, I'd only met Carl a handful of times before tonight. Above his shoulder, a piece of handcrafted artwork hung on the wall, its distinctive bright colors reminiscent of Central America.

I took the artwork as another sign that I had landed in the right place. God gave me a missionary heart, and I've learned how to be at home in the home of strangers. A dozen service trips to Nicaragua, an immersion experience in Rwanda, and countless other places. I have traveled enough to know that God's presence will be revealed in the delays and detours, if only I pause long enough to notice. My adventures have long been influenced by a quote from Max Warren reminding missioners "to take off our shoes, for the place we are approaching is holy" and to recall that "God was there before our arrival."

God gave me a missionary heart, and I've learned how to be at home in the home of strangers.

Indeed, there was ample evidence that God's presence preceded my arrival here. I heard it in the story Marie shared of how their relationship unfolded, and the ways they have committed their lives to careers in Catholic education. It was evident in spare toothbrushes, hot coffee and extra blankets. I noticed it in the quiet way Marie traced the sign of the cross on their children's foreheads before school.

Hospitality is one of those gifts that we truly only experience when we're in need. When we find ourselves standing at a stranger's door, empty handed, with nothing to offer but our bare selves. Further, you cannot offer hospitality unless someone else is there to receive it. Those who are blessed to offer hospitality are only made aware of the impact of their generosity because they have taken time to notice the beggar on the side of the road in need of a good Samaritan.

God never tires of making grace known through acts of radical hospitality when strangers appear — whether along the road to Emmaus, or on a dark highway running through South Bend, Indiana. As I headed out the next morning, with the sun peaking over the horizon, I was reminded to keep an eye open for God's presence and to watch out for the deer.