Tom Brady's retirement reminds of milestones in our own lives 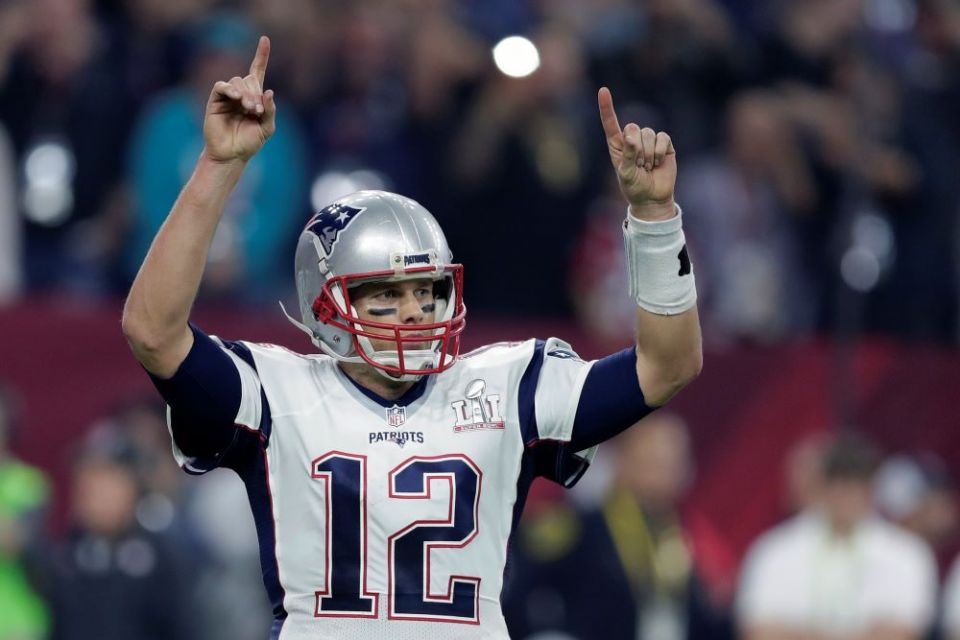 New England Patriots' Tom Brady reacts during the second half of the 2017 Super Bowl football game between the Patriots and the Atlanta Falcons in this file photo. At the time, NCR reporter Brian Fraga was a first-time homeowner and a sleep-deprived father who watched that game holding his newborn daughter. (AP/Darron Cummings)

Tom Brady's No. 12 New England Patriots jersey is by far the oldest item in my wardrobe. It has outlasted painter jeans, Rocawear and FUBU gear, black leather jackets and best-forgotten cargo pants.

But before the Super Bowl rings, the product endorsements, the Brazilian supermodel wife and the GOAT label, Brady was an unknown backup on a bad team.

The 2000 New England Patriots official program reminds us that Brady was once an unheralded fourth-string rookie quarterback on a team that would go 5-11 in Bill Belichick's first year as head coach. Brady was buried at the time on a depth chart topped by Drew Bledsoe, the Patriots' franchise quarterback who was selected first overall in the 1993 NFL Draft.

Nobody, certainly not I, back then foresaw in Brady, the 199th pick in the 2000 NFL Draft, a surefire Hall of Famer who would win seven Super Bowl titles for two franchises over a 21-year career, which ended when Brady announced his retirement Feb. 1.

The upcoming 2022 Super Bowl and the accolades that sports broadcasters and professional athletes have showered upon Brady as he walks away, still at the top of his game, have me reflecting not only on Brady's good fortune in his remarkable career, but also how his playing days overlap with so many milestones in my own life.

I was halfway through college when the Patriots drafted Brady. I attended the 2000 NFL Draft in person at the Theater in Madison Square Garden, taking the subway that morning into Manhattan from my dorm in Brooklyn Heights. Brady was not on my draft radar that day, nor apparently on most of the NFL franchises that passed on him until the Patriots selected the young quarterback from Michigan in the sixth round.

When Brady marched the Patriots down the field in the waning seconds of the 2002 Super Bowl against the heavily favored St. Louis Rams, I watched it all unfold, almost in disbelief, in the one-bedroom Brooklyn apartment that I shared with my fiancée.

I was 25, in my last semester at Hunter College, engaged, with a full head of hair, when Patriots kicker Adam Vinatieri split the uprights to hit the game-winning field goal from 48 yards out to give the Pats their first-ever Super Bowl title. I remember jumping off the couch, elated.

I was married and a little over two years into my journalism career when Brady won his third Super Bowl against the Philadelphia Eagles in February 2005. I watched that game at a minor seminary in Connecticut. A friend who was discerning the priesthood invited me to watch the game with other seminarians. I wore my Brady jersey and razzed my friend, a diehard Eagles fan who wore a Donovan McNabb jersey.

By the time Brady played in his fourth Super Bowl against the New York Giants, three years later I had divorced and returned home to Massachusetts, where I got a staff reporter's job at my hometown newspaper. I had gone through the church's annulment process and was engaged to marry again. My then-fiancée learned the depths of my football fandom upon seeing my despair at the undefeated Patriots losing their only game that year on the biggest stage in sports.

Four years later, Brady once more played against the Giants — and lost again in Super Bowl 2012. The following week, my wife and I packed our belongings and drove across the country to El Paso, Texas, near where I had accepted a newspaper reporting job in Las Cruces, New Mexico.

Ten years after his last championship, Brady won his fourth Super Bowl when the Patriots defeated the Seattle Seahawks on Feb. 1, 2015. By then, my wife and I had returned to Massachusetts and I was working as the police/courts reporter for another local daily newspaper.

I was a first-time homeowner and a sleep-deprived father who held his newborn daughter when Brady led the Patriots back from a 28-3 deficit to win his fifth Super Bowl against the Atlanta Falcons in February 2017. I had left the precarious world of daily newspaper journalism to work full time in Catholic news reporting when Brady won his sixth and last Super Bowl with the Patriots in February 2019.

Last year, Brady led the Tampa Bay Buccaneers to victory over the Kansas City Chiefs to win his seventh and final Super Bowl. The snapshots of my life at the bookends of Brady's Super Bowl victories show just how much change is a constant part of our world. Nothing remains the same.

That includes your faith. During Brady's career, my faith journey saw me evolve from a lax cradle Catholic in college to a young professional who embraced the conservatism of Pope John Paul II and Benedict XVI to a mellowed-out middle-aged Gen Xer in the Francis pontificate. A faith life includes its own share of changes.

But for more than 20 years, something that remained constant was Brady under center, reading NFL defenses, racking up touchdown passes and leading his teams to perennial playoff appearances. With the average NFL career lasting about 3½ seasons, Brady's longevity and his high quality of play over two decades were remarkable. We may never see it again.

Perspective | Tom Brady's retirement reminds of milestones in our own lives

Does God care who wins the Super Bowl?