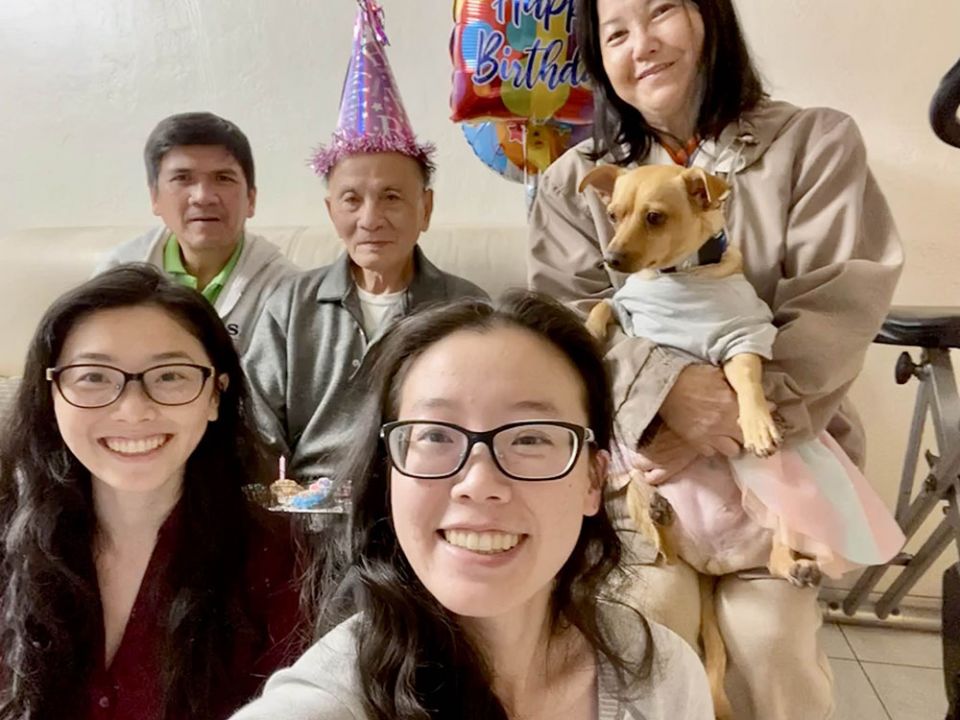 On the Monday after Kabul fell, I came downstairs to find my mother with tears streaming as she watched the unfolding scenes of desperation and fear. My dad, a man who rarely shows his emotions, stood in the kitchen, his cup of soy milk forgotten, tears welling.

It was only 46 years ago that both were in the same position: fearful, anxious and desperate as their country was overtaken, in turmoil, and the United States helicopters were flying farther and farther away without any of them or their families on board. During the Vietnam War, my grandfather worked alongside American soldiers as their translator, a crucial part of the mission against the Viet Cong. Yet even with documentation of such work, he and his family would be one of the many that were left behind after America evacuated from Saigon on April 29, 1975.

My grandfather was arrested and sentenced to 13 years in a "reeducation camp." He, however, was considered to be one of the luckier ones. Others were executed immediately, their bodies buried in a mass unmarked grave as a systemic massacre of the enemy.

Although my grandmother, mother and uncles were not sent to a "reeducation camp," they lived in fear of imprisonment and were constantly harassed and ostracized from the new society. They also lost their ability to worship freely as Catholics. They had to bury their Bibles, rosaries and altar in the fields.

Everything they were had to be hidden; their sense of self was buried. Even after my grandfather was released home, the family was placed under close monitoring and observation by the government to ensure that he truly had been "reeducated."

Therefore, the family had to escape individually — with my mother being the first to try to pave the way for everyone else. A Catholic priest who had baptized her and presided over her confirmation gave her his spot on a departing boat. One night at midnight, with only a rosary and three banana-wrapped sticky rice buns, my mom climbed onto this dinghy with 14 other people, and searched for freedom on the Pacific Ocean.

It was a horrendous journey during which they faced sickness, starvation, lack of water, robbery, rape and murder by pirates. Yet my mom had no choice but to make this journey because, as she told me, "to die free, being able to say my last prayers without fear, is better than to live with no voice and no hope."

Out of fuel after the first day, they drifted until they were rescued by a passing Filipino fishing boat and taken to a refugee camp in Palawan, Philippines.

From there, the combination of my grandfather's papers and sponsorship by a California parish supporting her with their time, treasures and talents paved the way for my mom to rebuild her life in America and help her family with their escape from Vietnam. 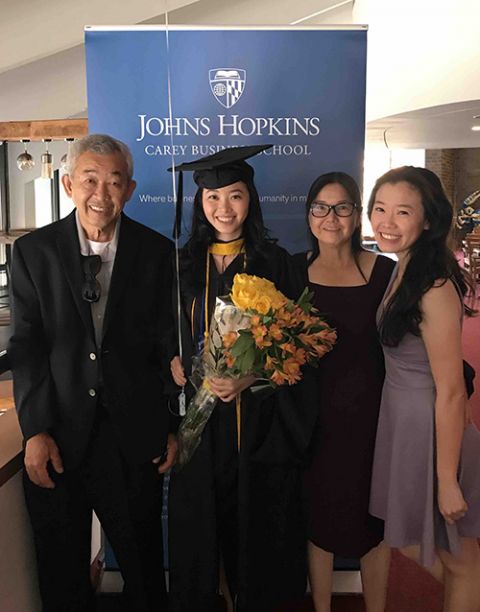 My family's stories and experiences are not unique. Countless similar stories make up the Vietnamese diaspora. Although I listened to those stories over and over, it was not until I sat on the couch with my mom that morning and watched the videos of the panic and desperation unfolding in Kabul that I could only begin to truly grasp what my mom, dad, grandparents and others in my community had experienced.

Even though they rebuilt their lives in America and other countries around the world, they still suffered decades later from the trauma of having their dignity stripped from them as they left everything to escape and search for freedom. That trauma left behind physiological and psychological scars for them and subsequent generations.

No one should ever be subjected to the destruction of one's dignity. The concept that "every human being is created in the image of God, entitled to human dignity and respect," as the Catechism of the Catholic Church says, is the foundation of modern Catholic social teaching.

When the dignity of a refugee, a migrant, a human being is destroyed by war and/or in the aftermath of war, the imago dei is destroyed. When we ignore the destruction of a refugee, a migrant, a human being's dignity that we can see unfolding right before our very eyes, we too are ignoring the destruction of the face of God. Therefore, Catholics striving to live out the teachings of the church are obligated to advocate for and serve all refugees and migrants.

Our moral and ethical duty to protect the dignity of Afghan refugees is twofold. First, we are obliged to call on our president, senators, representatives and other elected officials to evacuate and resettle all Afghan refugees, without any numerical caps but particularly those families who, because of a relative's work alongside the United States, are now in grave danger.

This includes not just Afghan refugees currently stranded in Kabul, but also those in other provinces who cannot make it to Kabul. While this poses some additional logistical questions, implementing solutions now is better than creating a secondary humanitarian crisis because we did not fully address the precipitating one. 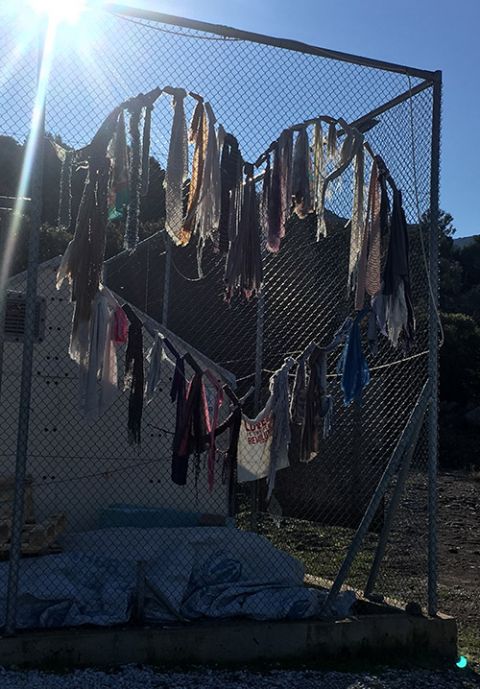 A refugee camp in Greece, where Theresa La and her sister, Lucia, volunteered (Courtesy of Theresa La)

Second, we are also obliged to actively assist refugees in rebuilding their lives. Emeritus Pope Benedict XVI in his message for the World Day of Migrants and Refugees in 2013, tells us: "The Church and her various agencies … are also called to promote real integration in a society where all are active members and responsible for one another's welfare … rightfully sharing in the same rights and duties."

It is our moral and ethical imperative, particularly as Catholics, to welcome all Afghan refugees into the folds of our communities, into our homes, as God welcomes us into his — "The land is mine, you are but strangers resident with me" (Leviticus 25:23).

In supporting the resettlement of Vietnamese refugees, sponsoring my parents, offering English and citizenship classes, providing shelter, purchasing food and supporting them psychologically, spiritually, and physiologically, parishioners in Michigan and California performed the corporal works of mercy.

They lived out God's calling to "cut away, therefore, the thickening about your hearts and stiffen your necks no more … and uphold the cause of the fatherless and the widow, and befriend the stranger, providing him with food and clothing. You too must befriend the stranger, for you were strangers in the land of Egypt" (Deuteronomy 10:16-19).

By focusing on the humanity of Vietnamese refugees rather than subscribing to the political drama surrounding the Vietnam War, they helped my parents to regain their human dignity. These servants continued the Catholic tradition of caring for migrants and refugees, which can trace back to the Old Testament when Abraham becomes the world's first immigrant (Genesis 12:1-3) and includes Jesus' family when they had to escape to Egypt (Matthew 2:13-14).

A version of this story appeared in the Sept 3-16, 2021 print issue under the headline: Why the US should accept more Afghan war refugees . 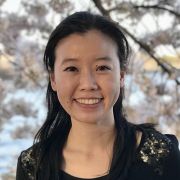 Theresa La is the proud daughter of war refugees and graduate of Catholic schooling from elementary parochial school to Loyola Marymount University and Georgetown University. She is currently a master’s student in physiology at Case Western Reserve University. When not advocating for social justice issues, she can be found drinking coffee and trying to teach her dog how to pray.

Commentary | The US accepted my family as refugees from Vietnam. Now we must welcome Afghans.

Group creating 'culture of inclusion' in one Philadelphia neighborhood