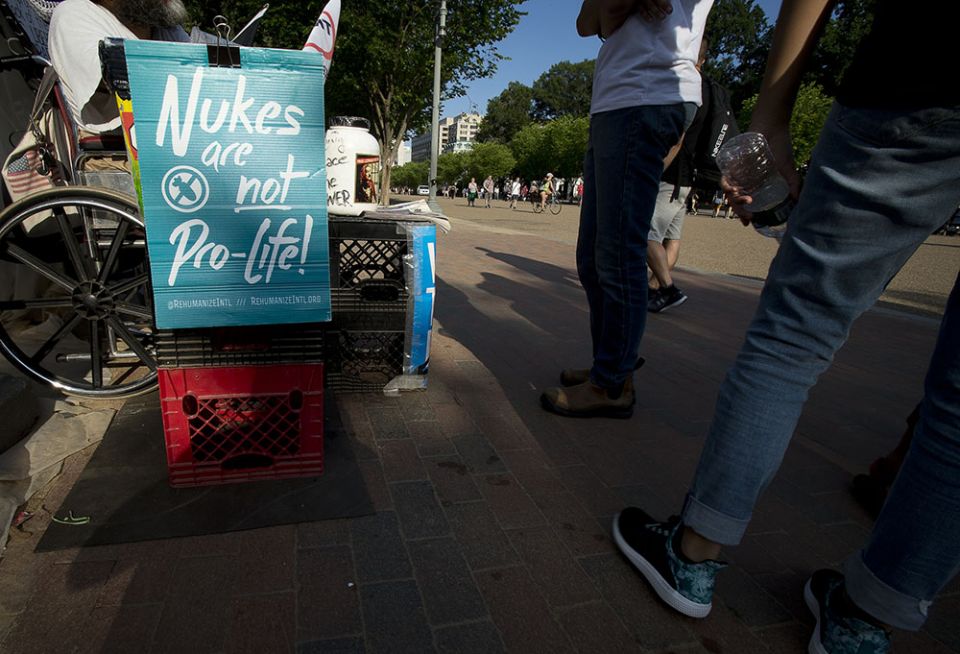 A nuclear war protester demonstrates outside the White House in Washington in 2017. (CNS/Tyler Orsburn)

For the first time in 20 years, the U.S. Conference of Catholic Bishops is updating its socially responsible investment guidelines, which inform the investment decisions made by many church organizations across the country.

One item worth consideration: Now that the Vatican is party to an international treaty seeking to ban nuclear weapons, could the guidelines address investments in companies tied up in the manufacture or sale of nuclear arms?

In January, the Treaty on the Prohibition of Nuclear Weapons (TPNW) became international law. This is the first major multilateral nuclear weapons treaty in decades. As a historic milestone, it became the first legally binding international agreement to establish a comprehensive prohibition on nuclear weapons, placing them in the same off-limits category as other weapons of mass destruction such as chemical and biological weapons.

Echoing the appeal of Pope Francis to work "decisively toward promoting conditions necessary for a world without nuclear weapons," several Catholic bishops' conferences and religious authorities from all over the world have already expressed support for the treaty and urged campaigns to mobilize society and politics to promote the accord's universal adoption.

Catholic bishops in Japan asked their government to sign onto the treaty, as have bishops in Canada, the United Kingdom, Germany and Belgium.

Los Angeles Archbishop José Gomez, president of the U.S. Conference of Catholic Bishops, has called national and world leaders "to persevere in their efforts to abolish these weapons of mass destruction, which threaten the existence of the human race and our planet." This call can be put into action in the new investment guidelines.

In 2015, Francis told the U.S. Congress that profit from the arms industry is money "drenched in blood." The only reason to hold any shares in weapons firms is to encourage them to end their involvement in the production of illegal and inhumane weapons through shareholder advocacy. Responsible investment policies, whether by shareholder initiative or disinvestment, offer opportunities to shift narrow economic interests toward efforts for the global good.

Right now, the bishops' investment guidelines are not all that proscriptive. They don't suggest that bishops and their dioceses avoid "sin stocks" completely. Instead, they offer guidance on how to hold investment in some of these nefarious industries in order to exert influence from the shareholder's podium.

This guidance facilitates the many faith investors who put forth ethical shareholder resolutions. These are not investors seeking to profit from bloody money; rather, they hold just enough of the companies to put ethical questions into boardrooms across America.

At the same time, shareholders should not dismiss the power of divestment as an option, and the new guidelines should encourage this for any nonengaged investor. Divestment by significant investors, executed with appropriate publicity, can alter the business climate and lead banks and manufacturers to reconsider their participation in the production of these most destructive weapons of mass destruction. Divestment offers a prophetic witness against profiting from nuclear weapons.

Responsible investment demands retaining a delicate balance on top of a solid moral footing, but it is not impossible. A policy stating the intention to implement the new treaty's prohibition on assistance with the production or maintenance of nuclear weapons and encouraging companies to change course within certain time frames will clarify the moral footing and be in line with Catholic teaching.

Catholic investors like the Sisters of Charity of Elizabeth, New Jersey; the School Sisters of Notre Dame Cooperative Investment Fund; and the Sisters of St. Francis of Philadelphia, among others, are keeping the door open for companies to repent and find a way back to less harmful practices. Their shareholder proposals are an educational tool and an invitation to others to reflect on what lies beneath the board's presentations and the company's profits.

Francis' encyclical letter Fratelli Tutti recognizes the arms industry has a vested interest in continuing armed conflict and perpetuating discord among populations. It describes the munitions industry as "a buildup of arms and ammunition in a global context dominated by uncertainty, disillusionment, fear of the future and controlled by narrow economic interests."

Francis told the people of Hiroshima, Japan, "The use of atomic energy for purposes of war is immoral, just as the possession of atomic weapons is immoral." So, too, are profits made from the manufacture of nuclear weapons.

The bishops' guidelines ought to make clear that short of divestment, the only reason to hold stocks in nuclear weapons manufacturers is to possess the voice to persuade other investors to end their involvement in making instruments of mass death and planetary destruction. 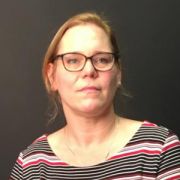 Susi Snyder coordinates Don't Bank on the Bomb, a project of the 2017 Nobel Peace laureate ICAN and Dutch organization PAX, to facilitate financial sector engagement with the nuclear weapons industry. 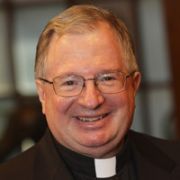 In Japan, Francis might be at odds with government on nuclear power, peace