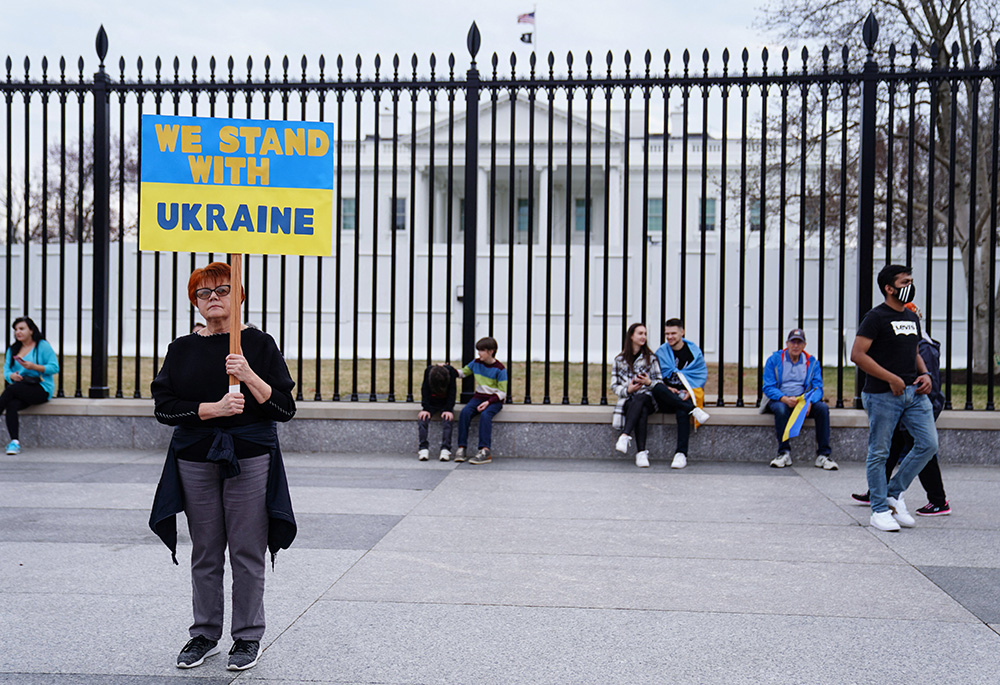 A woman near the White House in Washington holds a sign during a March 6 protest against Russia's invasion of Ukraine. (CNS/Reuters/Sarah Silbiger)

The unfolding nightmare in Ukraine continues to raise new moral issues for the West. At a time when politicians tend to stake out a position and cling to it even in the face of new information — as seen in the responses to public health measures the past two years — it is vital that we be more nimble in our ethical assessments and permit them to inform the military and humanitarian options available.

President Joe Biden has so far insisted that the U.S. will not send troops to Ukraine, even while we send more troops to neighboring NATO countries to reassure them and deter Vladimir Putin from thinking of invading any other neighbor. The president has also refused Ukraine's request for a no-fly zone over that country: That would be an act of war and also risks escalation of the conflict.

It is painful to refuse a request to help the brave Ukrainians. And it costs hawks like Sen. Roger Wicker of Mississippi nothing to urge NATO to erect the no-fly zone. But it could cost the rest of the world, including the Ukrainians, a great deal if the conflict escalates. Putin's armed forces are apparently tied down in Ukraine. That 40-mile convoy north of Kyiv has been stuck for a week. Any escalation would force Putin to consider nuclear options, a prospect too horrible to contemplate. Analysts at the Pentagon need to contemplate such scenarios and work very hard to avoid them.

The U.S. is not bound by treaty to come to Ukraine's assistance, although we are prudently sending them as many weapons as we can. I was hoping Biden would repeat the words of Franklin Delano Roosevelt in 1940 when European democracies was also threatened by a dictator. "Let us say to the democracies," Roosevelt told Congress, "We Americans are vitally concerned in your defense of freedom. We shall send you in ever increasing numbers, ships, planes, tanks, guns. That is our purpose and our pledge." Roosevelt noted that such aid was not an act of war "even if a dictator should unilaterally proclaim it so to be." Biden and other Western leaders should follow FDR's example.

The U.S. is bound by the Convention on the Prevention and Punishment of the Crime of Genocide, which was the first human rights charter adopted by the United Nations back in 1948. Determining when a genocide is taking place is a tricky business: The first Jew killed by the Nazis in the Shoah was as much of a victim of genocide as the last, even if it was not apparent at the time that the extermination of the Jews as a people was the Nazis' goal. The dead children in Irpin, killed by Russian mortars, are dead whether or not Putin turns this war into an act of genocide. But he may take military actions in the next few days that can only be described as genocidal.

Such a change would require the West to reconsider what it is willing to do to stop the conflict. In the face of genocide, the words of the Master in the Gospel of Mark 8:36 gain new moral force: "For what does it profit a man to gain the whole world and forfeit his soul?"

For more than 60 years, we in the West have said "Never again!" yet we failed to stop the genocide in Rwanda and we were late to confront the genocide in Bosnia. But now, in the region that witnessed the worst atrocities of World War II, if we allow genocide to happen and do nothing, what does that say about us? 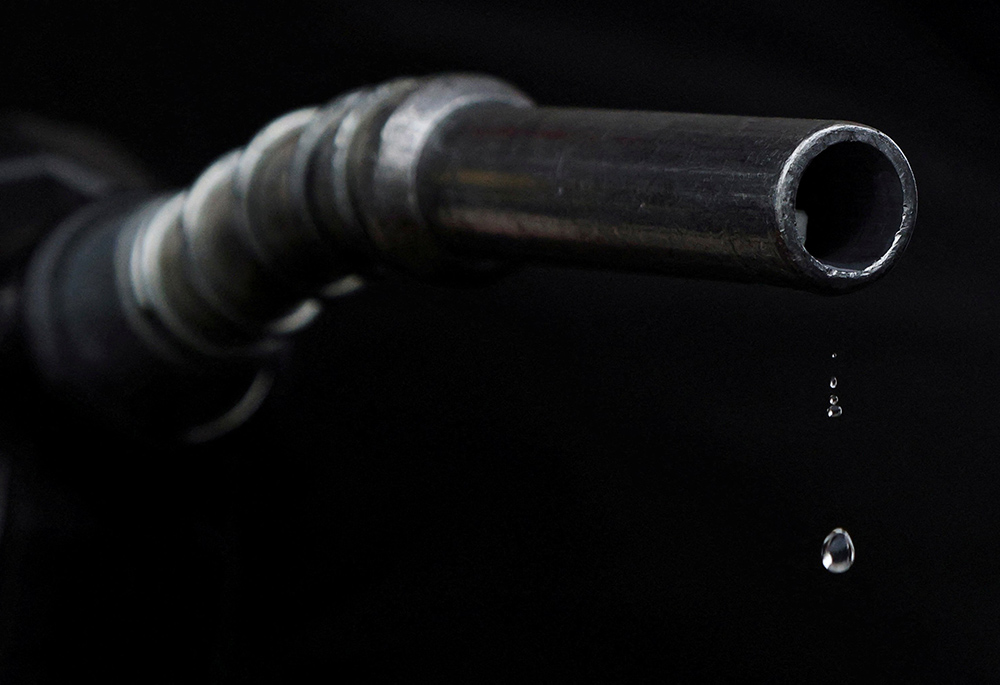 Gasoline drips out of a nozzle March 7 in Somerville, Massachusetts. (CNS/Reuters/Brian Snyder)

Another moral calculus, this one not reserved to the president, is now becoming clear. The price of a gallon of gasoline surged above $4 a gallon this week. This was before the president announced a ban on Russian oil imports.

The price surge comes at a time when inflation had already driven up the price of oil and gas, which in turn, causes price increases on virtually everything. Will Americans be willing to pay more at the pump in order to help shut off Russia's only real source of revenue?

Will Americans be willing to pay more at the pump in order to help shut off Russia's only real source of revenue?

Our forebears rationed gasoline — and a host of other staples — throughout World War II. Over the past two years too many Americans reacted to public health measures during the pandemic as if mask mandates were akin to the government asking them to storm the beaches of Normandy. These self-appointed guardians of freedom care about freedom, but they confuse it with license, flying their Gadsden "Don't tread on me" flags, denouncing Biden as a tyrant. It would be funny if it wasn't so tragic. It will be interesting to see if the conservative members of Congress who have been calling for a ban on Russian oil will back Biden when such a ban results in gas prices rising even higher.

Economic sanctions are taking a toll on the Russian economy, especially on the plutocrats who are Putin's closest allies. As well, the protests against the war in the streets of Russia are remarkable and show that information is getting through. Over 4,000 brave protesters have been arrested. Back when I worked in a restaurant, whenever I received a complaint about cold food or bad service, I always guessed there were 99 people who had the same experience but said nothing. Let's hope that ratio proves true in Russia, only increased many times over.

We are facing evil, and we need to resist it. But if that resistance is not marked by moral seriousness, that resistance could perpetuate the violence instead of alleviating it.

Let's hope, too, that the Russian military concludes it is paying too high a price for Putin's miscalculation. If there was one bit of intelligence I would want to have in my possession, it would be what the battalion- and brigade-level officers are telling their commanders about troop morale. I pray each morning and afternoon that some Russian units will begin to mutiny, and that God will visit confusion upon those who don't.

All of these scenarios are frightening because war is frightening. We anaesthetize it with movies like "The Longest Day" and television shows like "Hogan's Heroes." Even more realistic depictions of the violence, as seen in "Saving Private Ryan," aim to humanize war, leaving us ill-prepared to wrap our moral imagination around the impersonal inhumanity of a missile strike against an apartment building in the suburbs of Kyiv.

We are facing evil, and we need to resist it. But if that resistance is not marked by moral seriousness, that resistance could perpetuate the violence instead of alleviating it. The brave Ukrainian people will fight on no matter what we in the West do, but we should push ourselves to make sure our solidarity with them is real not just rhetorical.