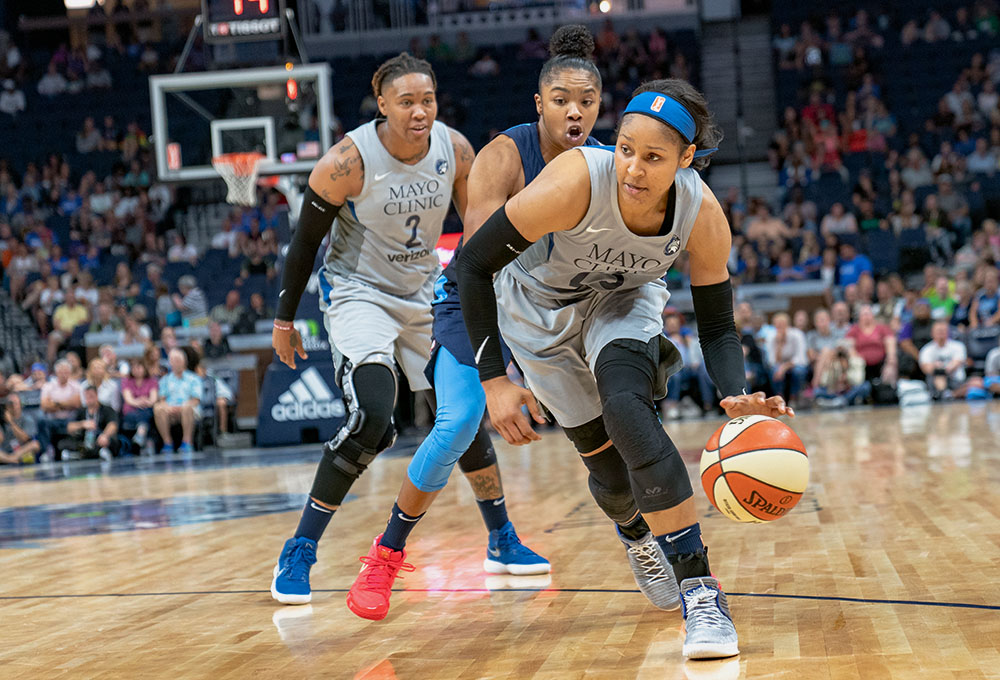 Maya Moore of the Minnesota Lynx dribbles around Alex Bentley of the Atlanta Dream during a WNBA game on Aug. 5, 2018, in Minneapolis. (Wikimedia Commons/Lorie Shaull)

The Women's National Basketball Association has 144 of the top athletes in the world, but their impact does not start or end on the basketball court. While male athletes like LeBron James and Colin Kaepernick often receive attention for their social justice efforts, the athletes of the WNBA have been quietly and consistently organizing arounds issues like gun control, increased protections for the LGBTQ+ community and voting rights.

The athletes of the WNBA have sacrificed their spotlight, endured ridicule on social media and creatively dedicated their professional and personal lives to advance social justice in the United States. To look to the WNBA as an example of justice is not just about looking at gender equity in ownership groups or coaching staffs, though the all-women's ownership group of the 2020 WNBA Champions Seattle Storm is certainly a fascinating example. Rather, it's about looking at these athletes who embody justice in authentic and profound ways.

In 2019, the Washington Mystics held a media blackout during a post-game press conference. Instead of discussing the game, Mystics player Natasha Cloud only addressed gun violence in Washington, D.C. Rather than focusing attention on themselves and the game, they redirected the conversation to the issue of gun violence.

This requires planning and preparation, since the players needed to be well-versed in the intricacies of addressing gun violence in their respective communities.

Perhaps the best example of sacrifice is Maya Moore. Moore is one of the best players in the history of basketball, earning nearly every accolade including WNBA MVP, Finals MVP, Rookie of the Year, four WNBA championships and four All-Star teams. Since 2019, at the height of her career, Moore has been on sabbatical to focus on criminal justice reform.

Her work has been focused on Jonathan Irons, who was imprisoned at age 16 to serve a 50-year sentence. He was released on July 1, 2020. It is almost certain that Moore would continue to lead her team to the WNBA championship if she continued to play. She is that good. Instead, she is focusing her time, resources and spotlight on the fight for criminal justice reform.

Catholic social teaching promotes solidarity, call to community and participation and the option for the poor and vulnerable, but it is easier for Catholics to simply believe these values and not put them into practice. WNBA athletes teach us how to live out Catholic teaching and that that social justice isn't a set of abstract ideals. Putting these beliefs into action requires planning, preparation and sacrifice.

For their 2020 season, the athletes of the WNBA dedicated it to the memory of Breonna Taylor, making "Say Her Name" the theme of the "wubble," the term for their 2020 COVID-precaution bubble season.

The athletes talked on Zoom with Tamika Palmer, Breonna's mother, in order to continue to build relationships. They did not view Breonna as another statistic, but a person with a family and friends who were grieving her death.

Layshia Clarendon, the Women’s National Basketball Players Association first vice president and nine-year veteran of the league, described the 2020 season as "a campaign committed to saying the names and fighting for justice for Black women. Black women are so often forgotten in this fight for justice, who do not have people marching in the streets for them. We will say her name: Sandra Bland, Atatiana Jefferson, Dominique 'Rem'mie' Fells and Breonna Taylor. We will be a voice for the voiceless."

They were more than just a voice, they were also activists living in solidarity.

The players in the league also engage the call to community and participation of Catholic social teaching. The 144 players in the league, typically segmented into 12 teams of 12 players, came together to recognize the power of community in summer 2020. In the immediate aftermath of police shooting Jacob Blake in Kenosha, Wisconsin, the players canceled all WNBA games.

Elizabeth Williams of the Atlanta Dream made a statement live on air, garnering the attention of the audience that was tuning in to watch the scheduled games. The statement read: "We have an opportunity to keep the focus on the issues and demand change. ... We will continue to use our platform to speak of these injustices that are still happening and demand action for change."

That night, instead of playing games, they held a candlelight vigil in the "wubble." They recognized their platform as a united league and put aside rivalries and game schedules in order to focus on the larger community and issues. Not every player has the same beliefs and they often disagree on a variety of issues, yet they grapple with this tension and choose to come together to form a community that is actively working for justice.

The WNBA players also model the courage required to commit oneself to justice. After the Atlanta Dream owner, former Sen. Kelly Loeffler, publicly commented that the athletes should not speak out on Black Lives Matter, the athletes arrived at their next games wearing "Vote Warnock" shirts, bringing national attention to Loeffler's opponent's campaign. Many credit the WNBA players with kickstarting the Rev. Raphael Warnock's campaign, and thus flipping the Senate from Republican to Democrat control.

To speak publicly and strategically against a team owner requires risk and courage. While this risk paid off for the Atlanta Dream and other teams, with Loeffler exiting the ownership group, Warnock winning the election, and the Dream being awarded the ESPN Sports Humanitarian Team of the Year award, it is easy to imagine another scenario where players were disciplined, lost sponsorship deals or were sidelined in a league where roster spots are competitive, as happened with Kaepernick.

WNBA athletes refuse to just "stick to sports," as critics continually comment on social media. They embody the call to social justice, even when it involves risk and sacrifice. In a league where 80% of players are Black, this lesson is even more important.

The WNBA athletes remind us that social justice is not an "extra" activity to be added on to our lives, but rather, the defining feature of our lives. Catholics can learn more about what it looks like to embrace lives of solidarity and justice by following the example of WNBA players.

Next time a game is on TV or covered in the sports section, I invite you to take another look at these players and their lives devoted to social justice — and stay for the really good basketball!

A version of this story appeared in the Oct 15-28, 2021 print issue under the headline: What can we learn from WNBA athletes fighting for freedom?.