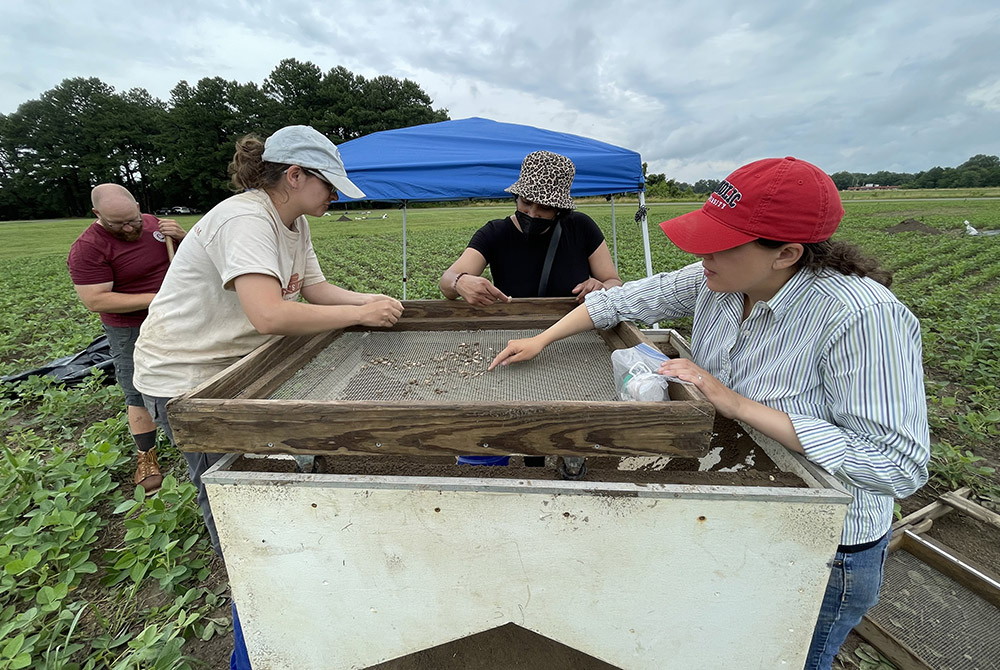 Editor's note: Over the summer, two anthropology professors — Laura Masur, of the Catholic University of America in Washington, D.C., and Steve Lenik, of St. Mary's College of Maryland — led a dig on a former plantation owned by the Jesuits: St. Inigoes, in St. Mary's County in southern Maryland. Several descendants of enslaved people, including the Georgetown University 272, a list of enslaved persons the Jesuits sold to Louisiana plantations, joined the dig. We asked four people who participated in the dig to share their reflections.

Ken Homan is a Jesuit brother of the Midwest Province. He is currently a history doctoral student at Georgetown University.

I sat on an upside-down five-gallon bucket, taking a few moments to breathe in the brutal July heat. Even under the cooling tent, I felt every bit of the 105-degree heat index. I spent that steamy July day busting sod, peeling back the top layer of a 5-foot square where we searched for artifacts of those who lived, worked and died here, those who my fellow Jesuits enslaved here. For two weeks this summer, I joined an archeology dig in St. Inigoes, Maryland, with five archeologists and dozens of descendants of those we enslaved. While I worked, I learned.

Most of the primary source documents I have read in my historical study as a doctoral student were written by my fellow Jesuits. They bear our obvious biases. But during the dig, the artifacts we encountered — animal bones, bricks, shells, nails, pottery, porcelain, cufflinks, pipestems, bottles — told that story with a frankness and honesty that our ledgers lack. Sitting on my bucket, I listened to the family stories, legacies and ongoing research of descendants. They forced me to pray. I invite you to pray with these same stories, emotions and legacies. 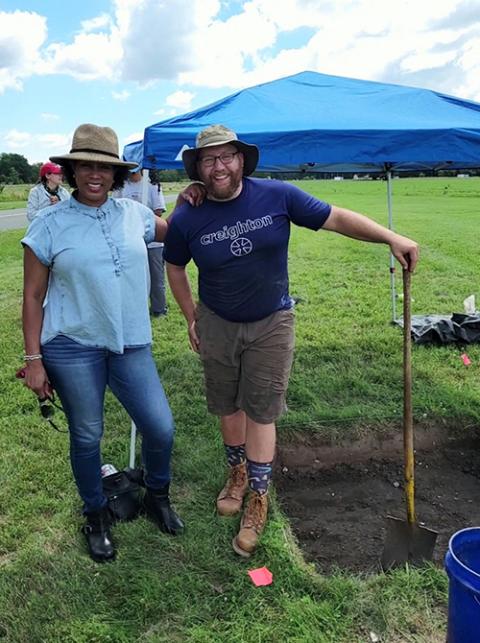 Robin A. Proudie has served as a civil servant with the federal government for over 23 years, and is a proud Navy veteran. She enjoys listening to straight ahead jazz, traveling and writing poetry.

In 2019, I received a letter from the Society of Jesus informing me that I descended from people they enslaved and made to labor at St. Louis University, or SLU, from 1823 until 1865. Like most people, I hadn't learned of the Jesuits' slaveholding history. I was somewhat perplexed that men of faith would undertake such an inhumane mission as to traffic men, women and children for the sole purpose of economic empowerment.

Since then, I've collaborated with researchers from the Slavery, History, Memory and Reconciliation Project to assist with the important work of uncovering the history of my Jesuit-enslaved ancestors and honoring their sacrifice by telling their stories and repairing the damage done through reconciliation.

I was excited to get the opportunity to participate in the archeological excavations of former Jesuit-owned plantations located in Maryland. I am a St. Louis native, but currently I live in Bowie, Maryland. I recently discovered that I reside on the very land where many of my SLU-enslaved ancestors once lived and labored. They were held in bondage on a Jesuit-owned plantation called White Marsh. In 1823, and again in 1829, a total of 26 of my ancestors were forced from their families and support networks on White Marsh to Missouri to establish the first Missouri mission and St. Louis College, now St. Louis University. My being back here, on this land, is just another confirmation that I'm being led by my ancestors on a sacred journey of discovery to reclaim their humanity. 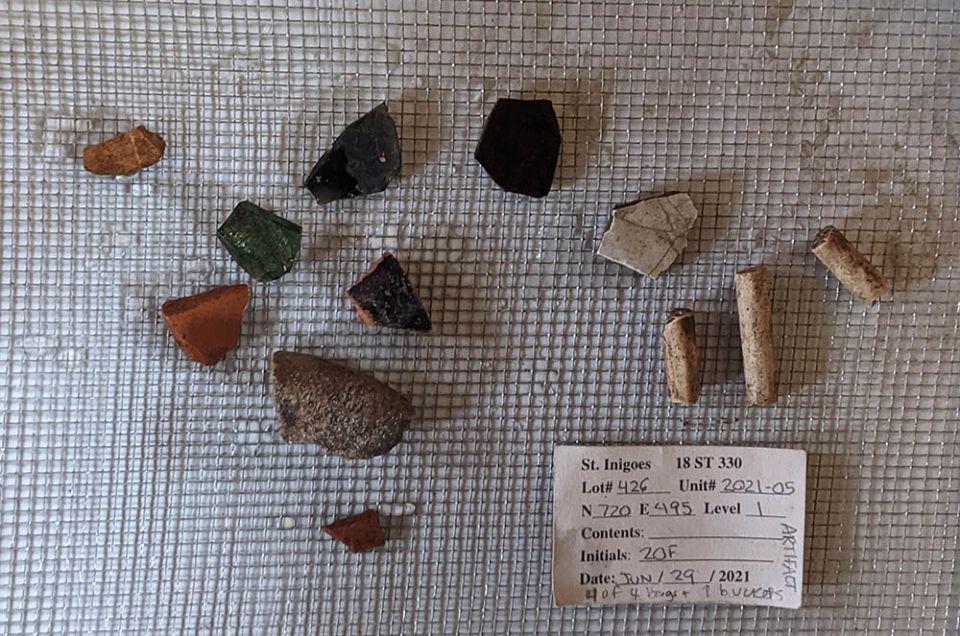 I spent two days at the dig sites on St. Inigoes in southern Maryland. When I picked up a rusty nail from the colonial period, or sifted through the soil with hopes of finding a one-of-a-kind artifact, I never let on that I could see shadowy figures illuminating out of the hallowed ground that was being dug up. Nobody would have believed me anyway. I travailed through the entire experience, convincing myself that this was all a necessary part of the sacred journey.

And on those nights, as I wept, I was comforted by the seraphic voices of the ancestors affirming that I am "their hope and their dream." And in those moments to come, when I will have no choice but to swallow another harsh reality of their unimaginable existence, equipped with a renewed purpose, I will hold my head high. For I know, but for my ancestors and the grace of God … go I.

Clarissa Ashton Stripling, a retiree, serves as the family historian and is active in the Unified Committee for Afro American Contributions of St. Mary's County, Maryland.

I recently learned I am a GU272 descendant. The GU272 were enslaved people who were sold by Georgetown University and the Maryland Jesuits to southern Louisiana in 1838. My family's DNA matches six of the Ancestry kits managed by the Georgetown Memory Project, which means we match cousins we were never aware of in Louisiana. Through endogamy, I am related to many other Southern Maryland GU272 descendants.

Much has been written about the seven stages of grief. I am in the anger stage.

I am angry that my ancestors were victims of well-documented Jesuit human trafficking. My ancestors were bought, sold, enslaved, forced to labor, and converted and indoctrinated into Catholicism. Families were broken up and sold off, never to be seen again, all in the name of Jesus.

I was heartbroken to learn that single, white, female Catholics aspiring to become nuns brought their slaves as dowries, or when I read the names and descriptions of my ancestors from the manifest of the Katherine Jackson or the Tweed slave ships, or to see people identified as cargo.

This despair is exacerbated when I realize I may never uncover my link to my enslaved ancestors in my lifetime. Georgetown has been adding records to the Georgetown Slavery Archive since 2016, but they have not shared a completion date. From my perspective, there has not been engagement from Georgetown to the descendant community as to which documents are digitized first. I know of no descendants who were consulted about the documents they are most interested in seeing first. We receive whatever documents Georgetown decides, when they decide. In-person use of Special Collections is limited to approved students, faculty and staff. You must know what you want so they can pull it, yet academics have access to the documentation, whereas descendants do not.

I am angry that this atrocity is not taught in schools, nor preached about in churches. I am angry that reparations have been slow in coming, or about Georgetown's refusal to provide free tuition to descendants to attend Georgetown or a college/university of the descendant's choice.

I am happy to be a part of the conversation but wonder how many others are unaware of their connection to the sale or are unable to research their ancestry. More of our story needs to be told.

Greg Beaman is a historian who specializes in slavery and urban development in the Atlantic world. He is a doctoral candidate in the History Department at Georgetown University.

My eight-great-grandfather, Richard Duke, arrived in what is now Maryland aboard the Ark as an indentured servant owing a fixed term of labor to Ferdinand Poulton, a Jesuit priest. Duke labored at the St. Inigoes plantation and helped construct the first buildings there. Duke appeared in a number of court cases while in Maryland, notably a 1648 case in which he testified of his attempt to capture and enslave a Wicomico woman. Along with his fellow Protestant servants, Duke harassed the Jesuits' overseer with anti-papist verbal abuse. By 1650, he claimed 100 acres of land from the Jesuits in return for his years of indenture.

Since I became aware of this part of my family history in June 2021, I have relied on my training as a historian to better understand why these stories matter. Historians, such as Jennifer Morgan, have shown that "racialized categories of enslavement were neither inevitable nor hardened" during the 17th century. The systems of racialized enslavement and settler colonialism were in the process of being constructed during the era of the founding of St. Mary's and the construction of St. Inigoes, but the future had not yet been written. 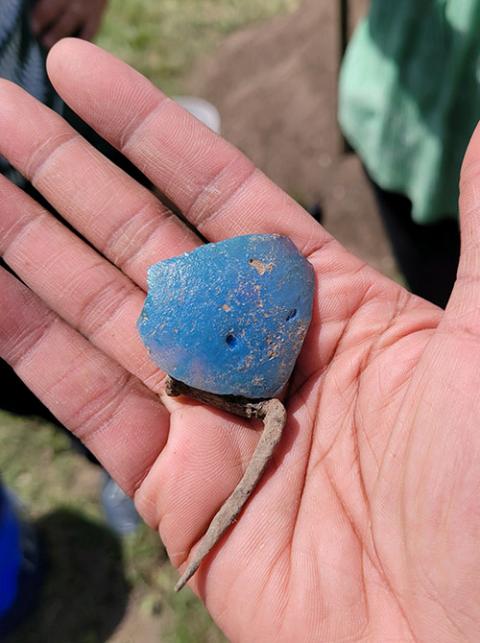 Even though the surviving archive only tells of Richard Duke's enslavement of a Wicomico woman, a glimpse at the histories of the Duke family and the families of my two co-authors profoundly demonstrates that African slavery became the dominant mode of labor organization in the Atlantic world. Enslaved Africans and their descendants suffered natal alienation, social death and immeasurable pain at the hands of their enslavers. By contrast, Richard Duke returned to England, watched his sons immigrate to America and died peacefully in the land of his birth.

In 2021, what does it mean to have Richard Duke in my ancestry? How does my ancestry impact my role in the process of reconciliation? While some of Richard Duke's descendants enslaved people of African descent and forced them to produce agricultural commodities, another, Daniel Robert Alexander Dukes (the name later acquired an "s" at the end), worked as a Methodist clergyman in 1850s Kansas, where he may have contributed in some way to the movement to abolish slavery in the United States.

Perhaps a beginning of my contribution to reconciliation is telling both of these stories in their proper historical context. The next step might be recognizing that both the honorable and the wicked parts of my family history deserve telling for the examples they offer to us in the present.

Related: Descendants of enslaved people join dig on former Jesuit plantation
A version of this story appeared in the Sept 3-16, 2021 print issue under the headline: A sacred journey of discovery.