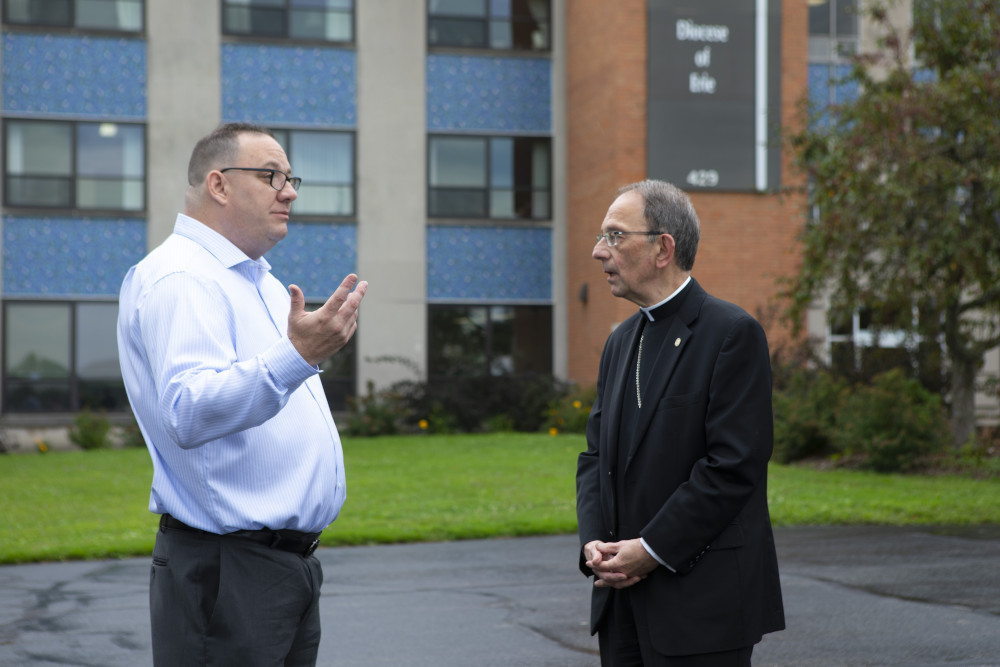 Bishop Lawrence T. Persico of Erie, Pa., speaks with Jim VanSickle of Pittsburgh, who told a Pennsylvania grand jury he was molested by a priest when he was a teenager in Bradford, Pa. VanSickle and the bishop spoke during an Aug. 21, 2018, news conference held in front of the Diocese of Erie's headquarters by members of the Survivors Network of those Abused by Priests, or SNAP. (CNS photo/Chaz Muth)

Praising clergy sexual abuse survivors for their courage in bringing their painful experiences to light, a panel of current or former diocesan victim assistance coordinators urged the Catholic community to enter into "radical accompaniment" with abuse victims to promote long-lasting healing.

Such healing is needed not only for abuse survivors but for clergy and parishioners alike, the coordinators agreed during an online program Nov. 9 marking 20 years of the "Charter for the Protection of Children and Young People."

The charter, adopted by the U.S. Conference of Catholic Bishops in 2002 in response to revelations of widespread years of clergy abuse going back decades, sets standards for dioceses to follow in responding to abuse allegations.

That victim-survivors continue to come forward is a testament to their resolution to confront the trauma they experienced, said Alicia Menard, safe environment coordinator for the Diocese of Fairbanks, Alaska.

"My hope for survivors is that they know their voices are making a difference," Menard said during the program sponsored by Georgetown University's Berkley Center for Religion, Peace and World Affairs.

Barbara Thorp, a social worker who formerly led the Archdiocese of Boston's office supporting and caring for abuse survivors, held up survivors for shining light on the abuse they experienced.

"My one hope is that we not be afraid and that the light is our friend, is the Lord Jesus who is bringing this light and allowing us as a church to not be afraid to see what needs to be seen," Thorp said.

Throughout the 90-minute discussion, which was moderated by Jesuit Fr. Jerry McGlone, a senior research fellow at the center and himself an abuse survivor, the speakers stressed the need for all church members to accompany abuse victims. They cited Jesus' example of being in "right relationship with one another."

Such a step -- described as "trauma-informed theology" by Heather Banis, coordinator of the Victims Assistance Ministry in the Archdiocese of Los Angeles -- can lead to healing not just for abuse survivors, but for the entire Catholic Church, the panelists agreed.

"If we come at this as a church, that we're called to be trauma informed, trauma sensitive, then it's not our offices who respond, but it becomes something that is constant throughout the church," Banis said.

The panelists recalled their experiences in guiding survivors through the difficult process of responding to the harrowing experiences that continue to drive distrust in the church and lead to questions about God's presence in their lives.

They also described how some survivors continue to face cultural pressures to remain silent about their ordeal, which explains an often years-long gap between the abuse and someone coming forward to seek justice and assistance.

Menard described how any type of abuse is not openly discussed in the Native American villages scattered throughout her 400,000-square mile diocese. Among Latinos in Los Angeles, families may fear losing access to vital church-provided services if someone accuses a priest of abuse, Banis said.

She described survivors as having entered "that great crucible of suffering in a unique way, and have been real instruments through that of healing for the whole church," she continued. "We owe survivors and their families an enormous debt of gratitude.

"It is they who are literally bringing to light something that was unknown, in a way, for many, many years that was a pall, in a sense, on the life of the church. It really needed to be exposed, revealed, and it was through the courage of survivors and their families that we have this great opportunity for (healing)."

Despite progress in addressing abuse and the needs of victims, the panelists also called for changes in the charter that would promote greater transparency of diocesan investigations.

Pointing to Pope Francis' 2019 "motu proprio," "Vos Estis Lux Mundi," Thorp also urged the U.S. Conference of Catholic Bishops to release the names of all American bishops being investigated by the Vatican during their fall general assembly Nov. 14-17 in Baltimore.

The pope's document established procedures for reporting allegations of sexual abuse and for holding accountable bishops, eparchs and religious superiors who protect abusers.

The participants also agreed that the church may not be the ultimate source of healing. They suggested instead that it was the survivors who can help the church to heal -- as long as the church hears what they have to say.

"If we have the courage," Thorp said, "we might receive from the survivors and their families the strength and the wisdom to be healed ourselves in the faith community."