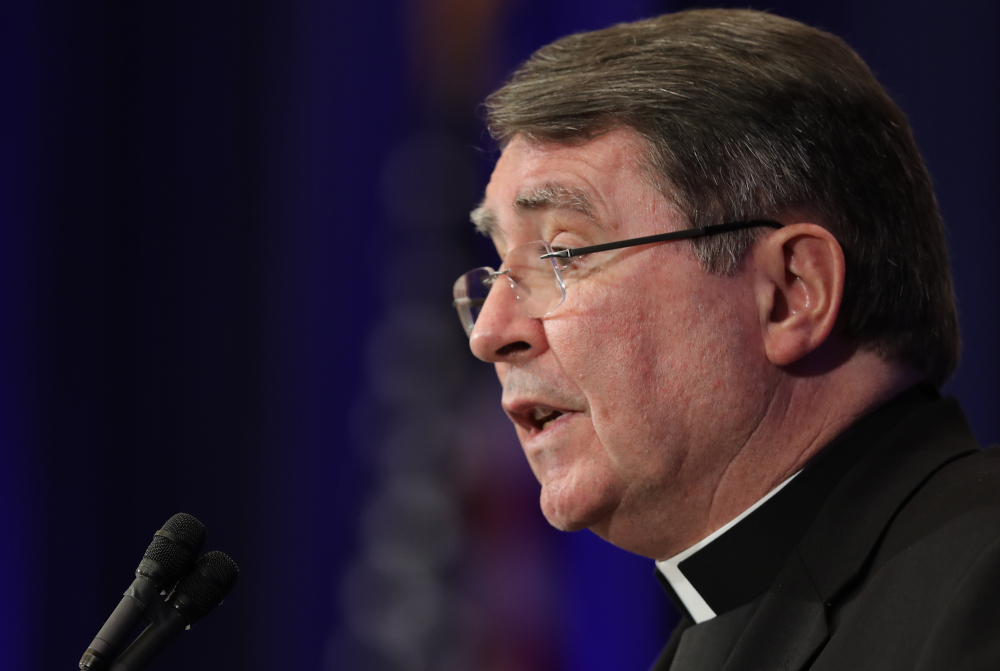 Asking the U.S. bishops to "reflect prayerfully" on the importance of their communion with the bishop of Rome, the Vatican's representative in the U.S. told the bishops that "the pastoral thrust of this pontificate must reach the American people."

"Our communion with the Holy Father can be expressed in the concrete actions that we take to make his magisterium better known among our people," Archbishop Christophe Pierre, papal nuncio to the U.S., said in his Nov. 11 address to the meeting of the U.S. Conference of Catholic Bishops.

Specifically mentioning Pope Francis' encyclical on the environment, "Laudato Si', On Care for Our Common Home," Pierre noted that some of the pope's teachings may take "greater effort on our part if they are to reach the hearts of political and civic leaders."

Pierre noted that Catholic families in the U.S. "continue to demand of dioceses and parishes the accompaniment envisioned by Amoris Laetitia," the pope's apostolic exhortation after the synods on the family.

Another indication of the "reception and implementation" of the pope's teaching would be for his apostolic exhortation, Evangelii Gaudium, to be the "framework for efforts at evangelization," Pierre said.

"Adopting its missionary impulse and being in a permanent state of mission might represent tangible signs of communion with the Holy Father," he said.

Communion also is key between bishop and priest, he said. With more priests from other nations serving in dioceses, "we must investigate how this has affected or is affecting the presbyterate within or respective dioceses," Pierre said.

"Many priests are saying they no longer know one another; others, due to the priest shortage, are forced to live in isolation managing multiple parishes," he said. "Our episcopal ministry demands that we act as bridges for our priests, attentive to their life and health, spiritual well-being and their sense of priestly identity and fraternity."

He asked the U.S. bishops: "Are we still zealous for the things of the Lord? While energy levels may diminish with age, hopefully our love for God and his people has increased, along with our gratitude for the grace of the call."

The nuncio said the "ad limina" reports submitted to the Vatican in advance of U.S. bishops' meetings with Francis and curial officials — indeed, a handful of bishops were already in Rome for these visits — "provide a clear picture of how the church in the United States is carrying out its mission."

Among the challenges bishops face, Pierre said, are: "demographic changes; growing numbers of religiously unaffiliated people; the need to engage young people and to build a culture of vocations; welcoming and integration of migrants, especially Hispanics; continuing the fight against all forms of racism; and defending and accompanying the human family."

"Each of us exercises his own specific episcopal ministry, but we also try to work together in a spirit of collegiality as an episcopal body. What are the strengths of this episcopal body, and how is the body serving the needs of the people entrusted to our pastoral care?" he said.

He suggested collegiality and collaboration as an approach.

"Do you find that you share experiences with brother bishops?" Pierre asked. "It is always edifying to find younger bishops discovering a 'mentor' among the more senior bishops, or to hear of how 'more experienced bishops' have taken the opportunity to share some of their wisdom and experience with younger bishops in a fraternal way."

Such "collective wisdom," he added, leads to the notion of communion. "As the 'ad limina' visits are upon us, it is good to reflect on the ways in which we exercise our communion with the Holy Father and with the wider church," Pierre said.

The U.S. bishops' visits "ad limina apostolorum" — to the threshold of the apostles — began Nov. 4 with a group from Massachusetts, Rhode Island, Connecticut, New Hampshire, Maine and Vermont. As the U.S. bishops met in Baltimore Nov. 11-13, the bishops of the New York region were in Rome for their "ad limina" visits. 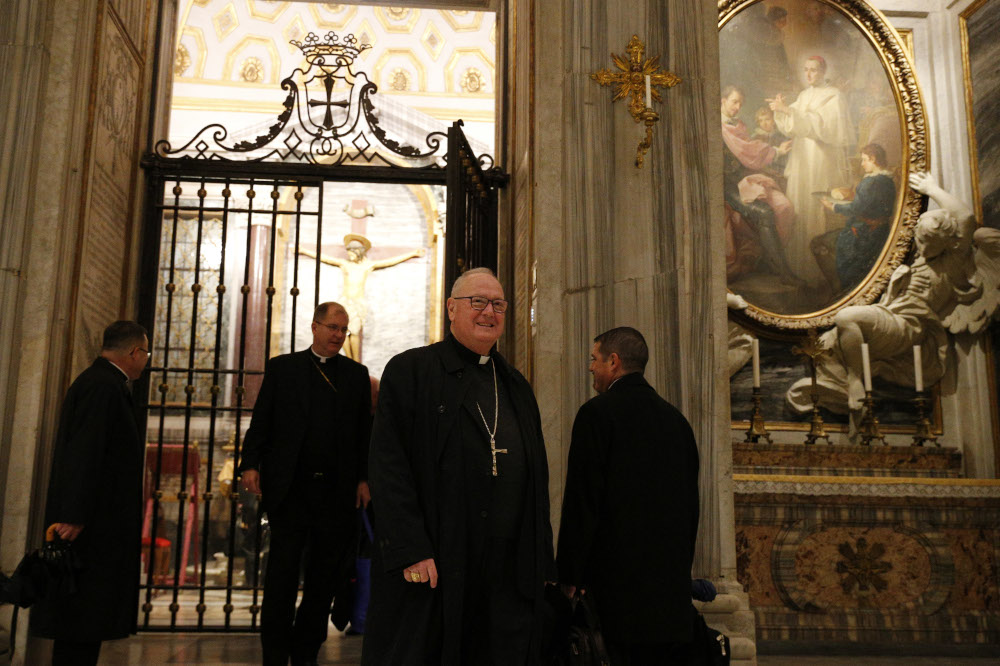 Cardinal Timothy Dolan, and other U.S. bishops from the state of New York prepare to concelebrate Mass at the Basilica of St. Mary Major in Rome Nov. 11. The bishops were making their "ad limina" visits to the Vatican to report on the status of their dioceses to the pope and Vatican officials. (CNS/Paul Haring)

Throughout the rest of November and in December, January and February, another 13 groups of U.S. bishops were traveling to Rome. The visits should conclude Feb. 22 with the bishops of the Eastern Catholic churches in the United States.

"The pope has emphasized certain themes: mercy, closeness to the people, discernment accompaniment, a spirit of hospitality toward migrants, and dialogue with those of other cultures and religions," the papal nuncio told the bishops gathered in Baltimore. "Do you believe that these are gradually becoming part of the mindset of your clergy and people?"

Pierre said the question is particularly apt as, while Francis has been emphasizing mercy, "paradoxically, people are becoming more and more judgmental and less willing to forgive, as witnessed by the polarization gripping this nation."

Church commentator Rocco Palmo called Pierre's statements "astonishing" and a "bomb drop," tweeting that he saw them as "unusually visceral" and "signaling a loss of patience."

But Chicago Cardinal Blase Cupich told NCR that Pierre "is just reminding us what the church teaches about the important role of our communion with the Holy Father, who binds us together."

San Diego Bishop Robert McElroy said he interpreted the nuncio's words as "inviting us to a deeper communion of dialogue," he said.

"The whole thing of this papacy is dialogue," McElroy said.

[Heidi Schlumpf is NCR national correspondent. Her email address is hschlumpf@ncronline.org. Follow her on Twitter @HeidiSchlumpf. Catholic News Service contributed to this report.]