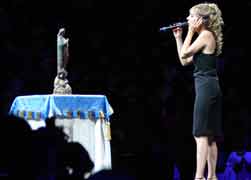 GLENDALE, Ariz. -- Nearly 22,000 people packed Jobing.com Arena in the Phoenix suburb of Glendale for an Aug. 8 festival honoring Our Lady of Guadalupe and featuring a special relic -- a small piece of St. Juan Diego's famed cloak.

The event was hosted by the Knights of Columbus and followed the fraternal organization's Aug. 6-8 International Marian Congress. During the festival, Supreme Knight Carl Anderson reflected on the unparalleled influence Our Lady of Guadalupe has had on the Americas.

"Your presence here today is a testament to the power of the message of love that Our Lady brought to this hemisphere," Anderson told the crowd. "Our Lady of Guadalupe is the empress of the Americas. She calls all of us to unity within the Gospel message of her son."

When Mary appeared to St. Juan Diego in 1531 in Mexico, the Spanish missionaries had had little success evangelizing the indigenous population. After the apparitions, millions of indigenous people converted.

Her appearance also called the Europeans and native populations to a new unity in her son, Anderson said, a call that is still in effect today for the Americas.

"We are all citizens of the Catholic hemisphere. Todos nosotros somos ciudadanos de un hemisferio cristiano," he said.

Anderson said it was providential the festival was held near Phoenix, because the city is a microcosm of the future of the country. It's a future that requires unity among Catholics, no matter their cultural heritage or language, he said.

"Remember this: What unites us as a Christian family, as children of a mother who has watched over us for nearly 500 years, is far greater than anything that divides us," Anderson said.

"And if we who live on the American continent have a shared past, we have a shared future as well: a future of unity in faith," he said.

A shared unity in faith was on display throughout the five-hour festival. Speakers and musicians from across the globe entertained and educated the crowd.

Immaculee Ilibagiza spoke to the arena about her reliance on Jesus and Mary in the aftermath of the Rwandan genocide of 1994. She credited her survival during those days to prayer and a rosary given to her by her father.

She lost her parents and three brothers, as well as numerous aunts, uncles and cousins, in the killing frenzy that left more than 1 million people dead. They were shot, burned alive or hacked to death by machetes.

Ilibagiza travels the world sharing a message about forgiveness.

Eduardo Verastegui, a popular Mexican model, singer and actor best known for his role in the pro-life movie "Bella," told the crowd about his conversion experience after leading a spiritually vacuous life in Los Angeles.

"I had everything in my life, but in my heart, I had nothing," Verastegui said. After feeling called to something greater, he vowed that he would never work in anything that would offend his faith, his family or his Latino culture.

The festival also featured musical appearances by Alexander Acha, a Mexican pop star; Dana, an Irish musician who penned the hymn "We Are One Body"; and Filippa Giordano, a native of Palermo, Italy, who recently released an album in Spanish that spent a number of months on top of the Mexican charts.

"Matachines," or traditional Mexican dancers who perform for Our Lady of Guadalupe, also participated in the festival.

But for many attendees, the greatest draw was a small piece of St. Juan Diego's "tilma," or cloak. The relic was originally given to the archbishop of Los Angeles during a visit he paid to Mexico City in 1941.

When Mary appeared to St. Juan Diego, she left her image on his cloak, which hangs in Mexico City's basilica.

Phoenix Bishop Thomas J. Olmsted processed around the arena floor with the relic, flanked by a bevy of altar servers from across the diocese.

In remarks to the crowd, the bishop said that in a faith filled with so many truths, traditions and saints, Mary stands above the rest.

"The most beautiful of all the saints is the Virgin Mary, Our Lady of Guadalupe," he said. "Mary is exquisitely beautiful because of the glory of her son."

Patty Garcia came to the festival with 56 other Catholics from San Felipe de Jesus Parish in Nogales. She noted the "matachines" and the relic from the "tilma" as high points of the event.

Contributing to this story was J.D. Long-Garcia.