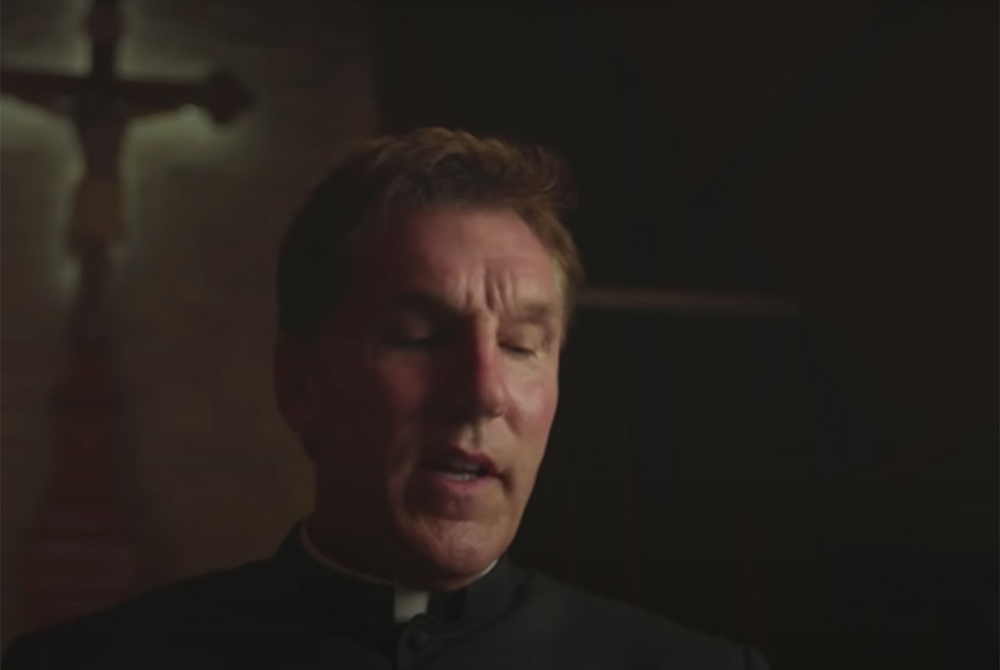 Fr. James Altman is seen in his YouTube video. In the clip he attacks Catholics who are Democrats. Bishop William Callahan removed him as pastor in early July. (CNS/YouTube screen grab)

Fr. James Altman, the firebrand reactionary priest from La Crosse, Wisconsin, has traveled the country, making speeches and giving interviews agitating against church leaders since his own bishop removed him from his parish and restricted his ministry in early July.

In the last seven weeks, Altman has spoken at the Conservative Political Action Conference in Dallas, attended the Napa Institute's annual high-end summer conference, been a featured speaker at a Michigan event organized by the strident far-right outlet Church Militant and donated $100,000 to a new organization called The Coalition for Canceled Priests.

That sum represents a fraction of the more than $650,000 Altman has raised through Christian crowdfunding sites such as GiveSendGo and LifeFunder since early July.

In presenting that check to the Coalition for Canceled Priests, Altman referred to bishops who discipline their priests as "these little tyrants that are in mitres." Online and in person, he has described himself as someone who has been "canceled" or persecuted for speaking hard truths.

Altman has struck a defiant tone and challenged the limits of the decree that Bishop William Callahan of La Crosse issued on July 8 that not only removed Altman from his position as pastor of St. James the Less Catholic Church in La Crosse, but also prohibits him from preaching or celebrating Mass in public.

"It's almost like he's playing chicken with the bishop on some level, and taking a very literal interpretation of the decree, but that's very shortsighted," said Robert Flummerfelt, a Las Vegas-based canon lawyer.

The decree also instructs Altman to reside in the Diocese of La Crosse, to undergo a 30-day retreat "to spiritually heal and recharge and address the issues that caused the issuance of this decree" and to meet at least once a month with the diocesan vicar for clergy. 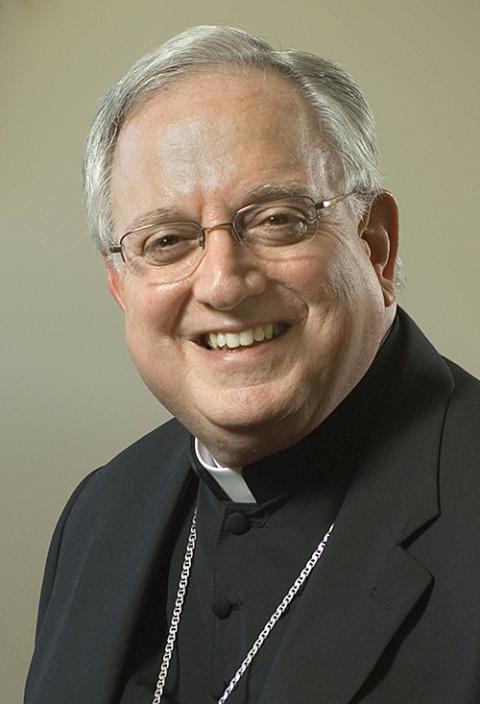 Bishop William Callahan of La Crosse, Wisconsin, is seen in this undated photo. (CNS/Courtesy of the Archdiocese of Milwaukee)

Asked if Altman had abided by the decree's requirements about the spiritual retreat and monthly meeting, a spokesman for the Diocese of La Crosse referred NCR to Callahan's July 9 statement announcing the decree.

Altman did not respond to NCR's repeated messages seeking comment.

Meanwhile, canon lawyers who spoke with NCR said Altman's actions in recent weeks are not only strengthening the bishop's hand in the event that the controversial priest appeals his removal as pastor, they said his behavior could even help the bishop build a case for stricter restrictions on his ministry and future disciplinary measures under the church's 1983 Code of Canon Law.

"If Fr. Altman had called me, I certainly would have asked him to tone it down," said Kelly O'Donnell, a canon lawyer who represents church entities, as well as individual clergy, religious and laity in juridical matters. O'Donnell told NCR that most people "do what their canonists request of them."

"I tell my clients, I can only defend you this far," she said. "All I can say is, he must have a good canon lawyer."

In a May 23 homily, Altman said he had retained a canon lawyer to appeal Callahan's decision to remove him as pastor. Altman also told his parishioners that the bishop had labeled him as "divisive" and "ineffective."

"If Fr. Altman had called me, I certainly would have asked him to tone it down."
—Kelly O'Donnell, canon lawyer

Altman's controversial profile exploded on the national scene last August after a 10-minute slickly produced YouTube video in which he railed against Democrats while slurring migrants, dismissing climate change as a hoax and denigrating Archbishop Wilton Gregory of Washington. Since then, homilies, interviews and parish bulletins have surfaced where Altman spread misinformation about COVID-19 and vaccines. In one homily, he downplayed the gravity of racial lynching in the Jim Crow-era South as "capital punishment."

In its July 9 statement, the Diocese of La Crosse said Callahan and his representatives had spent over a year "working toward a resolution related to ongoing public and ecclesial concerns" regarding Altman's ministry.

The cause for Altman's removal was for "disturbing ecclestiastical communion," according to Nicholas Cafardi, a civil and canon lawyer and a professor and former dean at Duquesne University School of Law.

A Latin-English edition of the Code of Canon Law is pictured on a bookshelf. (CNS/Nancy Phelan Wiechec)

Charles Reid Jr., a canon lawyer and law professor at the University of St. Thomas in St. Paul, Minnesota, told NCR that Callahan could decide to issue a broader, stricter decree to compel Altman to abandon his online presence or to seek his permission before traveling outside the diocese or speaking in public.

"The last [July 8] decree is being used as a road map to what he can get away with," Reid said. "He is testing the absolute limits of the decree. It doesn't say he's not supposed to raise money. He's raising money."

The decree also says Altman is not supposed to preach.

Said Reid, "Well, what is preaching? Certainly saying a homily is, but how about making YouTube videos or giving public talks? He is very cleverly, I think, attempting to stay within the letter of the decree. But at the same time he is plainly violating its spirit."

"He is very cleverly, I think, attempting to stay within the letter of the decree. But at the same time he is plainly violating its spirit."
—Charles Reid Jr., canon lawyer

The more than $650,000 Altman has raised since July is more than enough to pay for good canonical representation in appealing his removal as pastor, Flummerfelt said.

Flummerfelt said that the Vatican's Congregation for the Clergy, which hears removed pastors' appeals cases, tends to side with the diocesan bishop unless the priest can show that the diocese did not follow proper procedure. If anything, Altman's recent behavior strengthens the bishop's case, he said.

Altman "should be laying low, and trying to show that his removal was unjust," Flummerfelt said. "But by doing this, he's kind of setting it up for the bishop and Rome saying they have no choice but to uphold [the decree]. And Bishop Callahan can write to the Vatican to say Fr. Altman is continuing to commit acts which are negatively impacting and disturbing ecclesial communion in the diocese and in the wider church. And Rome is not going to look favorably on that."

Just two days after being removed from his parish, Altman spoke at the influential CPAC gathering in Dallas, which had "America UnCanceled" as its theme. Altman prayed over the attendees and in a sit-down segment, spoke against cultural elites and relativism while mentioning in passing that he had just been in Virginia the week before.

In late July, Altman was in California for the Napa Institute's summer conference. He was photographed in the background as former Philadelphia Archbishop Charles Chaput posed for a picture with Arina Grossu, one of the organizers of the Jericho March, a pro-Trump Christian group that sought divine intervention to overturn the results of the 2020 presidential election. 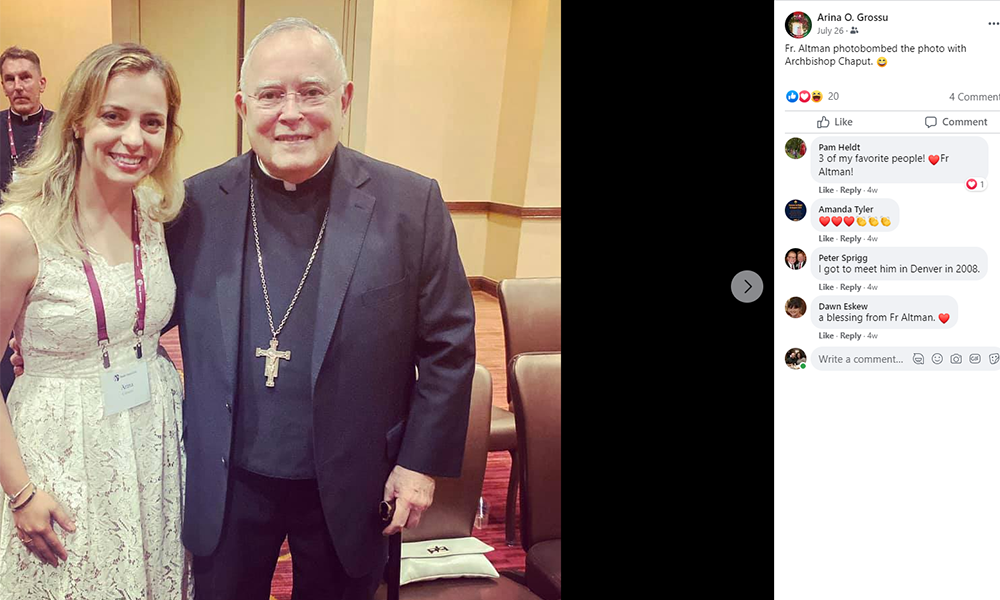 Fr. James Altman appears in the background of a photo as Philadelphia Archbishop Charles Chaput posed with Arina Grossu, one of the organizers of the Jericho March. Grossu posted the photo on Facebook July 26. (NCR screenshot/Facebook)

According to a video posted on Facebook July 26, Altman presented a $100,000 check to Fr. John Lovell, who also attended the Napa Institute conference. Lovell — a priest whose ministry has been restricted by the Diocese of Rockford, Illinois — is identified as a co-founder of The Coalition for Canceled Priests, which was incorporated June 15, 2021, in Illinois.

In interviews with conservative Catholic media outlets, Lovell contends he ran afoul of diocesan authorities for reporting sexual misconduct by a Catholic school teacher. A spokeswoman for the Diocese of Rockford said Lovell's restrictions are unrelated to his alleged reporting of misconduct at the school, and said his restrictions were upheld in subsequent appeals to the Congregation for the Clergy and the Supreme Tribunal of the Apostolic Signatura.

"While I cannot discuss the specifics of Father Lovell's case, I can tell you that there can be a variety of reasons a priest goes unassigned or has ministerial restrictions placed on him, and those actions are not taken arbitrarily or without serious regard for the faithful and for the priest himself," said Penny Wiegert, spokeswoman for the Diocese of Rockford, told NCR in an email.

On its website, The Coalition for Canceled Priests says it has applied to the IRS for nonprofit status, but while that status is pending, all donations made to the organization are not tax-exempt.

Archbishop Carlo Maria Viganò, the former nuncio who has taken to writing conspiratorial screeds from an undisclosed location, has endorsed The Coalition for Canceled Priests, which has organized a Sept. 10 public event in Chicago that advertises Altman as a featured speaker.

Altman has been a featured speaker at other events in recent weeks, such the "Strength and Honor" conference in Michigan organized by Church Militant. On Aug. 7, Altman told attendees that bishops had forgotten that they will one day be held accountable before God. A few weeks later, he was quoted in Church Militant describing as "reprehensible" how some bishops were talking about vaccine mandates.

On Aug. 12, Archbishop Michael Jackels of Dubuque, Iowa, released a statement advising "faithful Catholics" not to attend a fundraising dinner that an independent local Catholic radio station is hosting Sept. 22 with Altman scheduled as the event's keynote speaker. Jackels noted Altman's statements about COVID-19 and Vatican II documents, which Altman described during a speaking event in Minnesota earlier this summer as containing "sketchy stuff" and "bad news."

To canonists like Reid, Altman's rhetoric skirts very closely to violating Canon 1373, which warns of canonical punishment and penalties for those who stir up public hostility or hatred against the Holy See or a bishop for how they exercise their office.

"So while he may be trying to tiptoe around the decree, I look at the code and I begin to see substantive criminal offenses," said Reid, who even mentioned the possibility of invoking the schism clause in Canon 1364, though he believes the potential backlash from Altman's supporters makes that unlikely.

"I think the bishop would be loath to go there because politically the right wing in the Catholic Church certainly engages in a pattern of behavior of theatrics and intimidation," Reid said.

Before things would escalate to that level, Flummerfelt said there are intermediate steps a bishop could adjust depending on Altman's response. Ideally, Flummerfelt said the Code of Canon Law encourages such disputes to be resolved privately before going a juridical route.

"It's that biblical principle of going to your brother first, let's try and resolve it," Flummerfelt said. "Lots of times, people kind of have their backs up, each is in their own camp, there isn't that dialogue, and then you have to go the legal route. But it's never too late to try to resolve it."

Related: Wisconsin bishop restricts ministry of firebrand priest Fr. James Altman
A version of this story appeared in the Sept 17-30, 2021 print issue under the headline: Controversial Wisconsin priest still speaking out despite limits from bishop.