Austrian reform-minded priest to embark on US tour 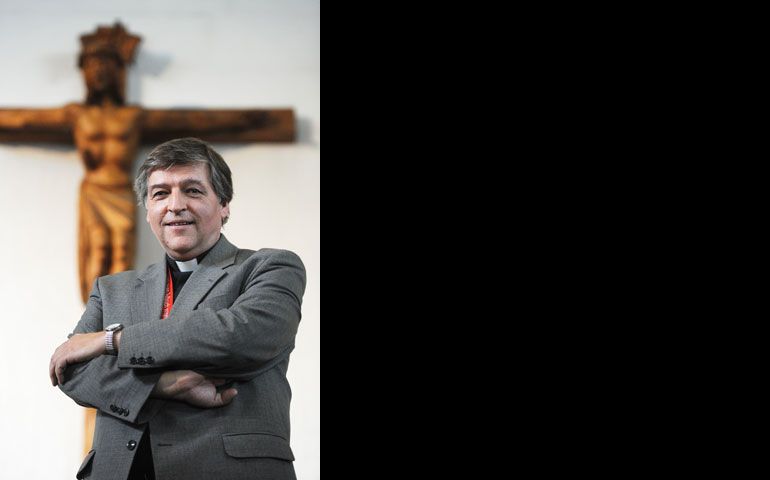 Fr. Helmut Schüller, a leader in Austria's call for church reform, will bring his message to the United States this summer in his first American speaking tour.

Schüller received international attention last year when, along with more than 400 priests and deacons, his call for church reform was documented in an "Appeal to Disobedience," published by the Austrian Priests' Initiative last June.

Schüller founded the Austrian Priests' Initiative, a group committed to open discussions about the issues and problems within the Catholic church, in 2006.

Catholics both in the U.S. and Europe and around the globe are really ready for a change and I believe that bringing Father Helmut to the United States helps both laity and priests see what other Catholics around the world are doing," Nicole Sotelo, director of programs and communications at Call to Action, told NCR. "It will help inspire us to continue our movement for change here in the U.S." The church reform group Call to Action is one of a coalition of organizations sponsoring Schüller's visit.

"He brings an awareness of widespread discussions about and proposals for solutions to the problems of the church today," she said.

"The archbishop had decided that Father Schüller could not speak at any Catholic parish because he espouses beliefs that are contrary to the teachings of the Catholic Church," said Larry Bloom, deacon at the Boston-area St. Susanna Parish, where Schüller had been scheduled to speak.

St. Susanna tends to attract Catholic parishioners with a lot of questions and, therefore, often has speakers who represent various and sometimes controversial points of view, Bloom wrote in an email to NCR June 24.

"This, however, is the first time in my eleven years at the parish that we have actually been told we could not allow someone to speak at the parish," Bloom wrote.

Schüller's talk will instead be held at a Unitarian-Universalist church down the street from St. Susanna in Dedham, Mass.

Despite the simple resolution of the incident, tour organizers said in a press release that O'Malley's action is distressing, particularly since he is one of eight cardinals appointed by Pope Francis to help reform church governance.

"This attempt to suppress these long overdue discussions is a disservice to Christ's body," they said in the release.

A main impetus of the Austrian Priests' Initiative, according to its manifesto, is the reduced number of priests available to serve established parish communities, which threatens the right of baptized Catholics to celebrate the sacraments, especially regular access to the Eucharist.

The church hierarchy's response to fewer priests has been to close and consolidate parishes, destroying existing communities and creating impersonal mega-parishes, the manifesto says.

To increase pressure for reform, two years ago the initiative issued an "Appeal to Disobedience," in which signatories pledged to:

Many American Catholics whose smaller communities have been merged appreciate the effort to keep parishes small, accessible and local, Doucette said.

"A faith community needs to work together, to pray together and if we're not going to have priests in that community, then there need to be other ways of thinking about and sharing within the community," she said.

Sotelo said, "American Catholics can learn from the model these countries established -- a model of collaboration between laity and priests coming together to confront issues within the church."

"The majority of Catholics want more lay participation," said Sotelo, who also writes for NCR's Young Voices column. "I think it's just a small group in the hierarchy that are resistant to those changes."

Benedict instead called for a "radicalism of obedience" and criticized the group for being "convinced that the slow pace of institutions has to be overcome by drastic measures, in order to open up new paths to bring the church up to date."

Progressive American Catholic organizations, many of which are sponsoring partners in Schüller's tour, also took notice of the Appeal to Disobedience but, unlike Benedict, praised the initiative.

"We immediately sent that information to our members and applauded the effort of priests who were seeing the great need for reform in the church and seeing what the people needed and were speaking up and organizing to do so," Doucette said.

Because Austria and Europe started experiencing these trends years ago, American Catholics can learn from the model these countries established -- a model of collaboration between laity and priests coming together to confront issues within the church, Sotelo said.

Schüller, who once served as vicar general for the Vienna archdiocese under Cardinal Christoph Schönborn, was stripped of his "monsignor" title last December.

Progressives across the globe have supported his message and, according to Doucette, his U.S. tour is an opportunity for Catholics across the country to collaborate.

"It's a way to connect," she said. "All of us think different things and see different pieces as the most important solution to a problem, but [there is] a common desire within the faith to seek the reform that is essential to the 21st century."

"Catholics in the U.S., both laity and clergy, are very eager to see a new way of being church," Sotelo said. "At the heart of it, Catholics already know that the church needs to change and I think tours like this re-inspire us to take our faith and put it into action for justice."

In an effort to support local parishes in their own discussions, organizers have created an action packet to leave with local groups hosting the tour. The packet has additional steps they can take to help further the conversation.

"Now we really have a chance to have laity and priests address these critical issues together," Sotelo said. "It's going to take all of us. ... We have to work together as a church."

In addition to Call to Action and Voice of the Faithful, the organizations sponsoring Schüller's tour include Catholics in Alliance for the Common Good, CORPUS, DignityUSA, FutureChurch, the National Coalition of Nuns, New Ways Ministry, Southeastern Pennsylvania Women's Ordination Conference, the Quixote Center, the Women's Ordination Conference and Voice of the Faithful's Philadelphia affiliate.

MORE
Schedule of Schüller's tour with dates and cities

Parish | Austrian reform-minded priest to embark on US tour

Where the true church emerges

Editorial: A search for light amid dark tidings