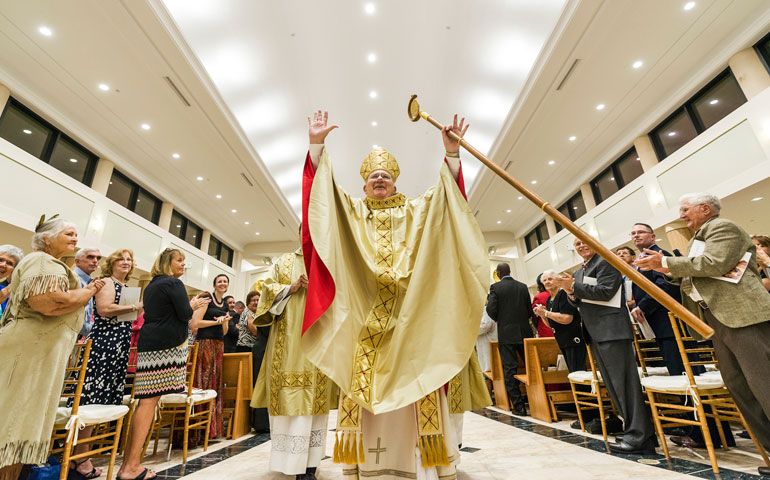 Bishop Robert Lynch of St. Petersburg, Fla., concludes the dedication of the newly renovated Cathedral of St. Jude the Apostle Sept. 12. (CNS/Ed Foster Jr.)
This article appears in the Synod on the Family feature series. View the full series.

In an unusually blunt report to the Vatican, Bishop Robert Lynch of St. Petersburg, Fla., said that even most regular churchgoing Catholics in his diocese find the church's teaching on artificial contraception no longer relevant.

"On the matter of artificial contraception, the responses might be characterized by saying, 'That train left the station long ago,' " he wrote in a Feb. 7 blog about his report. "Catholics have made up their minds and the sensus fidelium [the sense of the faithful] suggests the rejection of church teaching on this subject."

In the blog on his diocesan website, Lynch said more than 6,800 Catholics in the diocese responded to a Vatican request worldwide for local church feedback on pastoral issues of marriage and family life, in preparation for October's special synod on that topic. He said he sent his report on the results to the Vatican in mid-January.

Most of the respondents agreed with church teaching that marriage -- or at least sacramental marriage -- is strictly a union of one man and one woman, he said, but at the same time many had serious problems with the church's pastoral approach to divorced and remarried couples and to same-sex couples.

He said they also had issues concerning the way the church deals pastorally with young couples cohabiting before marriage, a phenomenon that has grown significantly in recent years.

Lynch initiated the survey last December to ask his people's response to the issues raised in a questionnaire on marriage and family life that the Vatican circulated last October in preparation for the world Synod of Bishops that is to be convened by Pope Francis this coming October.

Lynch -- who is nationally known from his years as general secretary of the National (now U.S.) Conference of Catholic Bishops before his appointment to the St. Petersburg diocese in December 1995 -- is one of the few U.S. bishops who took the Vatican request for local feedback to the point of seeking grassroots Catholic responses.

Individual bishops or entire bishops' conferences in some other countries -- perhaps most notably Germany, Switzerland, Belgium, and England and Wales -- responded to the Vatican questionnaire by seeking wide grassroots response.

The U.S. Conference of Catholic Bishops, however, at the organizational level treated the Vatican request for input from local dioceses and parishes as something American bishops could deal with by conferring with existing consultative bodies, such as their diocesan priests' council or diocesan pastoral council.

As a result, only a handful of U.S. bishops took the path Lynch adopted, inviting all Catholics in his diocese to express their views on how well or poorly the church deals pastorally with marriage and family issues that they -- or other Catholics they know -- face.

In reporting on the 6,800 responses to his questionnaire, Lynch noted, "The survey responses generally reflect the 'choir,' those people who faithfully attend Mass on Sundays and holy days of obligation, if not daily. They do not represent the feelings of those who have fallen away from the practice of their faith, are angry or frustrated or feel alienated from the Church. How I wish I could have heard from them as well."

Even the "choir" -- the 78 percent of respondents who said they attend Mass at least every Sunday and holy day (including 9 percent who said they go to Mass every day) -- overwhelmingly said that most Catholics they know do not accept church teaching on natural family planning and birth control. Of all respondents, only 13 percent agreed that Catholics they know accept church teaching in that area; 81 percent disagreed, and 6 percent said they were uncertain or declined to answer.

Lynch's blog also included a link to an 18-page statistical summary of the survey results.

The survey, distributed in churches of the diocese last November and made available on the diocesan website in English and Spanish, drew 6,560 responses in English and 255 in Spanish. Nearly two-thirds of the respondents were women and some three-fourths were 50 years old or older.

Only 1.7 percent responded "other" to the marital status question, a response that the summary said "includes but is not limited to those currently cohabiting with a person of the opposite sex outside of marriage and those in formal or casual same-sex relationships."

In his blog comments, Lynch said, "There was very strong support for the notion that marriage -- which I believe they understood as sacramental marriage -- is between one man and one woman."

"Having said that," he added, "it was also clear that the respondents felt that the Church needed to be prepared to better respond to the reality of same-sex marriage."

He said respondents called for the church to be "kinder and gentler ... less judgmental and more welcoming" toward those who identify themselves as gay or lesbian. They also "very clearly stated" that the church should treat adopted children of same-sex couples the same way it treats all other children.

"Respondents felt very strongly" that the church needs to do something more to reconcile divorced-and-remarried Catholics and that its current annulment process is inadequate, he said.

Lynch said that on the issue of cohabitation, "the respondents strongly said that the Church needs 'to wake up and smell the coffee.' "

Cohabitation without marriage "is commonplace, and there are some reasons for it which cannot be summarily dismissed, such as economic realities," he said.

The questionnaire addressed a variety of other issues to be treated at the upcoming synod, including the adequacy of marriage preparation, of church education programs to teach children the faith and help parents pass on their faith and values, and of support systems for single parents.

Lynch said that from other reports he has read, he believes Catholics in other parts of the world share many of the views expressed by the Catholics of his diocese.

Just days earlier the publication of similar surveys by the bishops of Germany and Switzerland showed similar gaps between church teaching and what Catholics in those two countries believed (NCR, Feb. 14-27).

The German bishops' report said that such differences are seen "above all when it comes to premarital cohabitation, [the status of the] divorced and remarried, birth control and homosexuality." The report represented the views of Catholics from all 27 German dioceses and about 20 German Catholic organizations, Catholic News Service reported.

CNS said the Swiss bishops' report, based on responses from 25,000 Catholics, drew results quite similar to those expressed in Germany.

Also in early February, Univision released results of a poll it sponsored in 12 countries with some of the world's largest Catholic populations, reaching at least 1,000 Catholic respondents in each country. The results of the Univision survey of European and U.S. Catholics seemingly matched the reports of responses to the Vatican questionnaire.