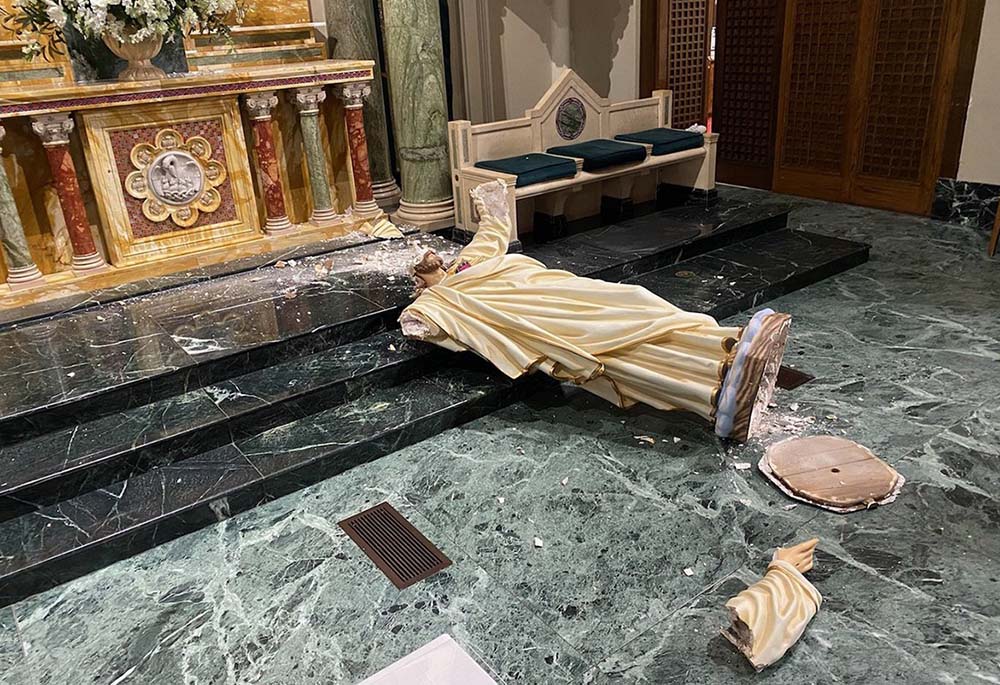 An almost 90-year-old statue of the Sacred Heart of Jesus is seen Sept. 15, 2020, at St. Patrick's Cathedral in El Paso, Texas, after it was destroyed by vandals. (CNS/Courtesy of El Paso Diocese/Fernie Ceniceros)

It was after a pair of Catholic churches caught ablaze last summer, one in Southern California and another in Florida, that the U.S. Conference of Catholic Bishops decided to start documenting and tracking vandalism at Catholic sites across the country.

The two fires occurred on the same morning: July 11, 2020. One destroyed the rooftop of the historic San Gabriel Mission — the fourth of a series of missions across California that Fr. Junípero Serra founded during the Spanish colonization era. The other ignited in Queen of Peace Catholic Church as parishioners prepared for Mass in Ocala, Florida. 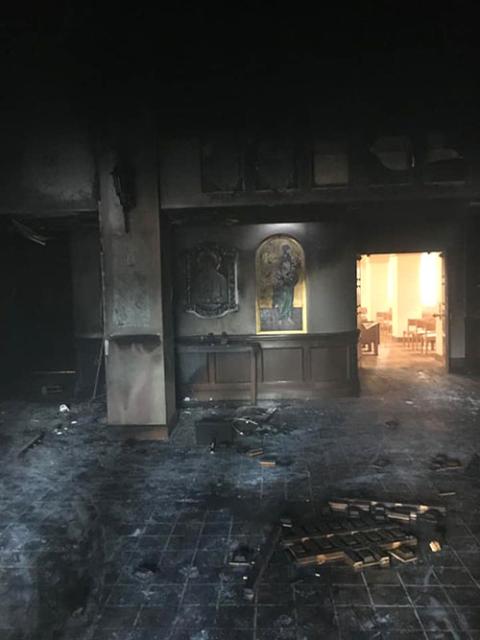 Queen of Peace Catholic Church in Ocala, Florida, is seen July 13, 2020, after it was set ablaze by a suspect who drove his van through the front doors two days earlier. (CNS/Courtesy of The Florida Catholic)

Nobody was injured, but Aaron Weldon — of the bishops' Office of Religious Liberty — said the fires were "the impetus for us to start monitoring these sorts of events."

Since then, the U.S. bishops' conference has tracked more than 105 incidents of vandalism of Catholic sites in the U.S., including arson, graffiti and defaced statues. The organization has logged news reports of such incidents dating back to May 2020, but it doesn't yet have a detailed breakdown that categorizes the different kinds of vandalism.

The conference has dedicated a page on its website listing news stories of vandalism by month.

In California, statues of Serra have been toppled in protest of what activists have called the enslavement of Native Americans. A monument for "babies whose lives are ended by abortion" was knocked over at Our Lady of the Assumption Church in Bloomingburg, New York. The Cathedral Basilica of the Immaculate Conception in Denver was recently marked with graffiti that read "Satan lives here" and included references to "child rapists."

While these incidents point to specific issues — the colonization of Indigenous people, the church's stance on abortion, the priest abuse scandals — Weldon said there isn't always messaging left behind at vandalized Catholic sites. He said damaged statues, such as monuments to Jesus Christ or the Virgin Mary, make up a large portion of the vandalism they've documented.

"When you're talking about a statue being smashed, it's kind of hard to know what's going on. There's not really a message there," he said. "Did they single out the Catholic Church, or is it simply that our symbols of religion are so visible that they make an easy target?" 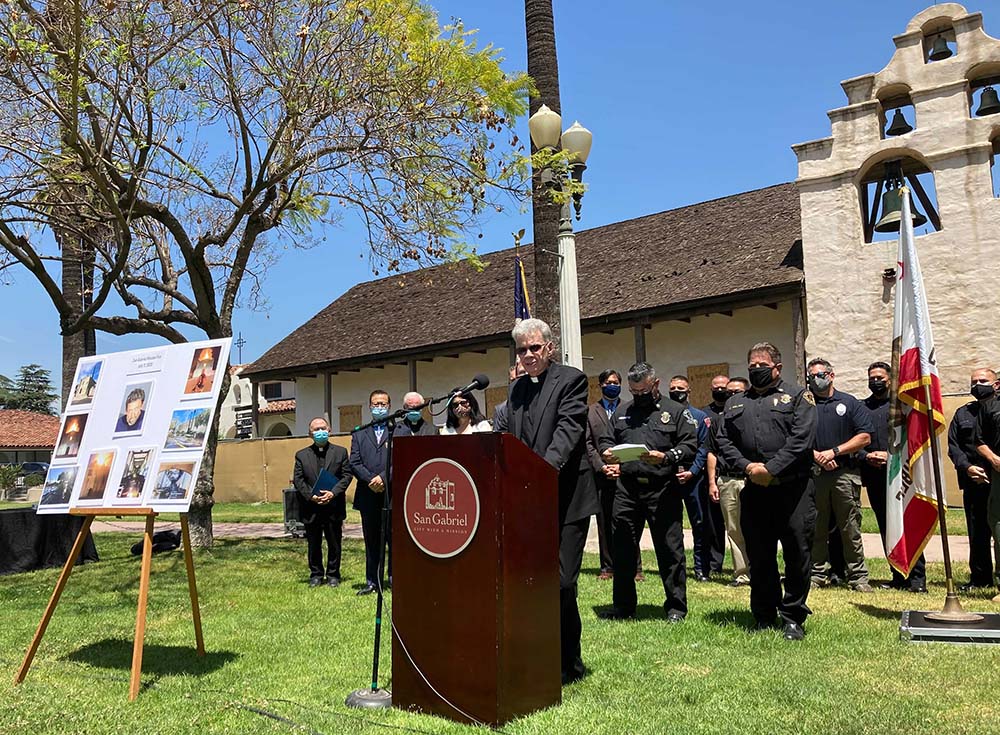 Fr. John Molyneux, pastor of San Gabriel Mission, said the parish community had been "rocked by this incident," during a press conference May 4 in San Gabriel, California. A man accused of setting a fire that gutted the 250-year-old mission in July 2020 has pleaded not guilty to arson. (RNS/Alejandra Molina)

"We're kind of working on learning more about what's going on," Weldon said.

Through an interfaith effort, the bishops' conference has been advocating for more funding from FEMA's nonprofit security grant program to improve security measures in their buildings. "Because it's not just Catholic churches that have to deal with this," Weldon said. Jewish houses of worship, he said, "face this worse than we do."

New FBI stats show the number of hate crimes (8,263) reported in fiscal year 2020 was the highest since 2001. Hate crimes motivated by religious bias accounted for 1,244 offenses, and more than half (683) were antisemitic.

To Brian Levin — director of the Center for the Study of Hate & Extremism at California State University, San Bernardino — just the sheer volume of Catholic sites can make these spaces easy targets if someone wants to make a statement against Catholicism or religion in general.

"Catholics are the most represented religious faith in the U.S.," Levin said.

But there's a mix of issues that could be contributing to the multiyear rise in anti-Catholic hate crimes, Levin said.

The fact that President Joe Biden is Catholic "makes Catholicism more covered generally, as well as conflicts within the particular faith," Levin said.

Additionally, the Catholic church has made its own headlines lately. Unmarked graves have been discovered at a number of residential schools operated by Catholic orders or dioceses in Canada. And in the U.S., bishops and other Catholics have sought to restrict Communion for pro-choice politicians over their stance on abortion.

Combine that with the spread of religious conspiracy theories, a rise in religious skepticism and closures due to COVID-19, and a Catholic Church might be the closest place for a "would-be offender" to strike, Levin said.

In Colorado, the Denver Archdiocese is keeping its own tally and has documented at least 25 parishes or ministry locations that, since February 2020, have been targets of vandalism, property destruction or theft, said Mark Haas, a spokesman with the archdiocese. 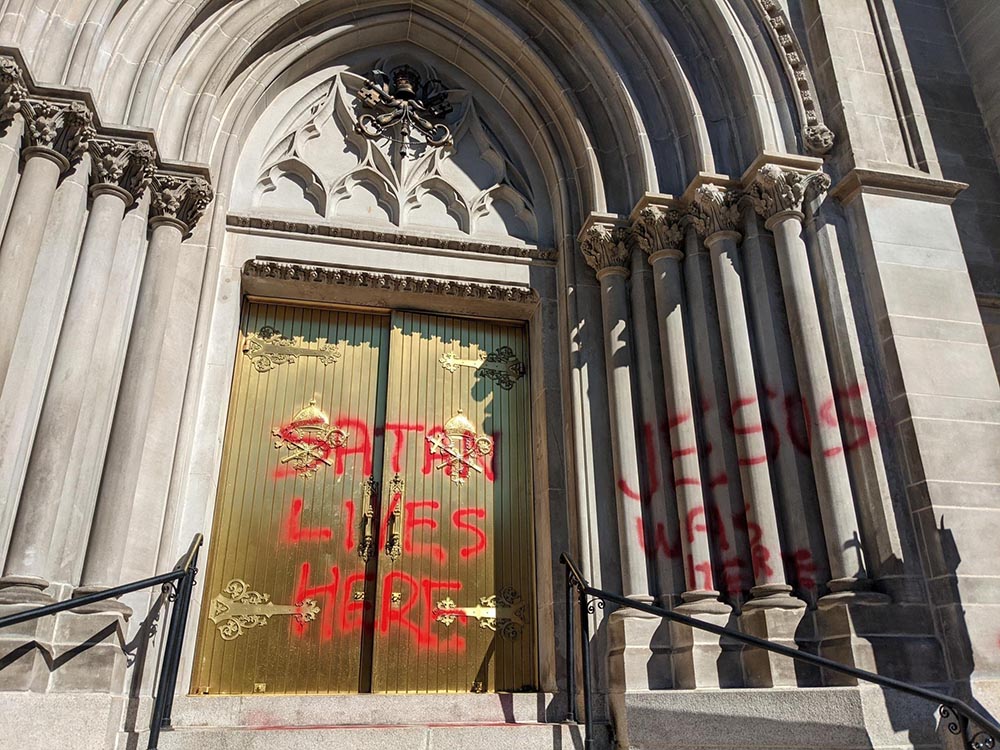 The Cathedral Basilica of the Immaculate Conception in Denver is seen Oct. 10, after it was vandalized. (CNS/Courtesy of the Denver Archdiocese)

"Some of these incidents have been clearly targeted at the Catholic Church, but not all of them," according to a statement provided by Haas. "The number could be higher because some minor incidents are not always reported."

Haas said some of the incidents the diocese has tallied have not been included in the bishops' conference record, including a theft that appeared to be "profit-motivated."

"We continue to pray for the conversion of those who carry out acts of desecration against our churches, statues and religious symbols," the statement read.

But to a handful of protesters in Northern California who took down a Serra monument last year on Indigenous Peoples Day, doing so "was an act of healing," Morning Star Gali, a member of the Ajumawi band of the Pit River Tribe, told Religion News Service in a previous interview. Gali has advocated for the protesters, known as the "Indigenous Peoples 5," who are facing felony vandalism charges.

"This is an opportunity for them to help rectify issues of the past and the violence that the church is responsible for," said Gali, project director for Restoring Justice for Indigenous Peoples.

Related: One year later, advocates pressure for charges to be dropped in toppling of Serra statue

San Francisco Archbishop Salvatore Cordileone has applauded the charges as a "breakthrough moment for Catholics." It does not appear that any other protesters who have toppled or vandalized Serra statues have faced any kind of charges.

In downtown Los Angeles, St. Peter's Italian Catholic Church was vandalized on Oct. 11 with graffiti reading, "STOP COLONIZING OUR LAND" and "Land Back." Red paint splattered the front of the church, which was established in 1904. The incident is being investigated as a hate crime.

Fr. Fernando Cuevas Preciado, who pastors St. Peter's, said he believed the people responsible for the vandalism, which occurred on Indigenous Peoples Day, were "using the church to protest."

"It wasn't something against the Catholic church," he said.

To Cuevas, it appears the vandalism was likely related to Columbus Day and what Christopher Columbus, who was Italian, represents. While Columbus was Italian, his voyages were sponsored by Spain.

Cuevas said vandalizing a church or monument should not be a form of protest.

"To me this is a sign of intolerance that we are seeing as a society, a lack of values," he said. "I believe in dialogue and harmony."