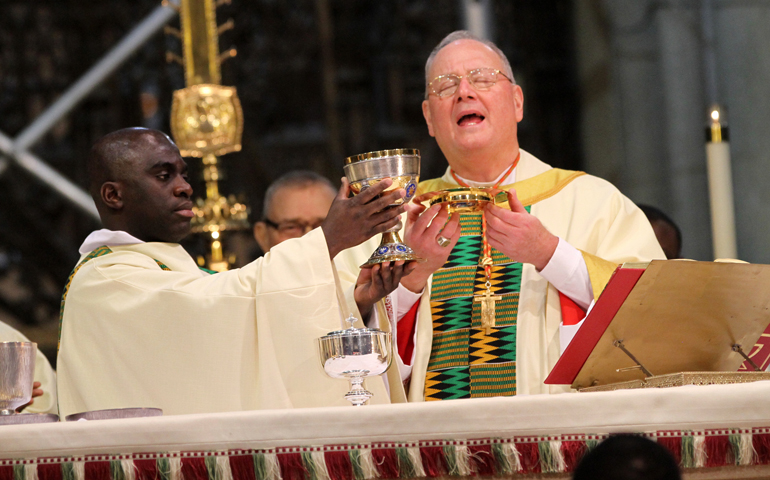 Cardinal Timothy Dolan of New York, right, and Deacon Jean Marie Uzabakiriho, who was born in Rwanda and is a fourth-year seminarian at St. Joseph's Seminary in Yonkers, N.Y., elevate the Eucharist Sunday during an annual Black History Month Mass at St. Patrick's Cathedral in New York. (CNS/Gregory A. Shemitz)

Hundreds of men, women and children, many in the traditional, colorful clothing of their African and Caribbean ancestral homelands, opened Black History Month on Sunday at St. Patrick's Cathedral with an exuberant Mass.

"It was a form of family reunion" that reflected the diversity of the black Catholic community in New York, said Christian Br. Tyrone Davis, director of the Office of Black Ministry for the New York archdiocese.

Cardinal Timothy Dolan of New York was the main celebrant of the Mass, which also marked the 26th National Day of Prayer for the African American and African Family and the Year of Consecrated Life.

As he processed up the main aisle, accompanied by joyful music and rhythmic bass drumming, Dolan was followed by a man who twirled an open, fringed umbrella over his head, in the manner reserved for chiefs and kings in West Africa.

"For a moment there, I was worried the roof was leaking, but thank God, it's just a magnificent African custom," Dolan said. St. Patrick's Cathedral is undergoing an extensive renovation. Scaffolding blocks many pews and obscures familiar details of the soaring interior.

In his homily, Dolan asked, "Is it any wonder at all that Moses and the Exodus was the favored image of black American preachers, like the Rev. Dr. Martin Luther King Jr.?"

The cardinal said faith inspired the liberated slave and sainthood candidate Pierre Toussaint, whose remains are buried in the cathedral's crypt. "And Jesus, the new Moses, rescued the African slave Josephine Bakhita from tortured servitude to the freedom of the children of God and she is now a jewel in the crown we call the communion of saints," Dolan said.

The Sudanese-born St. Josephine was kidnapped into slavery as a child. She won her freedom in Italy in 1889, became a Canossian sister and served for 45 years until her death in 1947. She was canonized in 2000.

Dolan said Moses, Jesus, Toussaint and St. Josephine "urge us now to embrace the immigrants who arrive today, embarrassingly scarred by some nativists within our country -- immigrants who only want to 'pass over' into new life."

Dolan started the call-and-response prayer, "God is good/All the time/All the time/God is good." When the congregation responded, he said, "So we must be good to those immigrants who come to us today. We must be good to those in Africa who probably suffer at this very moment a threat of assassination or seeing their churches burned down, or their women sold into trafficking and servitude simply because they believe in Jesus Christ."

Davis told Catholic News Service that Dolan's comments on immigration resonated with the congregation because "black Catholics, even those people born here, have experienced challenges with hospitality and welcome and some more serious than that. This is an ideal community to speak about the importance of welcoming the stranger."

Black Catholics in the archdiocese have backgrounds in Africa, Central America and the Caribbean, Davis said.

The annual Mass to open Black History Month and celebrate the national day of prayer for African-Americans "is a critical part of our ministry. It's not some sense of performance, but a moment in time for people on a pilgrim journey. We need to have a moment to refresh ourselves and come together with fellow travelers to prepare for the next leg of the journey, which for us is the next 364 days," he said.

The Mass included prayers in several African and Caribbean languages and music from a choir comprised of people from various schools and parishes in the archdiocese.

W. Mark Howell, director of music at St. Charles Borromeo Church in Harlem, organized the music for the Mass. "Music is such a rich part of our heritage and lends itself to our whole cultural and worship experience," he said.

The congregation sang along and kept the beat by waving special white handkerchiefs printed to commemorate the Mass and its celebrant, "Timothy Kojo Cardinal Dolan." Davis said Kojo is a Ghanaian name that Ghanaian Catholics in New York gave to the cardinal to acknowledge he was born on a Monday.

One of the Mass concelebrants, Conventual Fransciscan Fr. James E. Goode, founded the national day of prayer in 1986. He told CNS that he got the idea during a meeting in Atlanta of the former National Office of Black Catholics. "Everyone was talking about drugs and broken homes and I said, 'No one has talked about God and prayer. Why don't we get together and pray as families?'"

"Now we celebrate the day as a country and a blessing and we make a commitment to be 'family.' We have to invite people to become a part of our experience," Goode said.