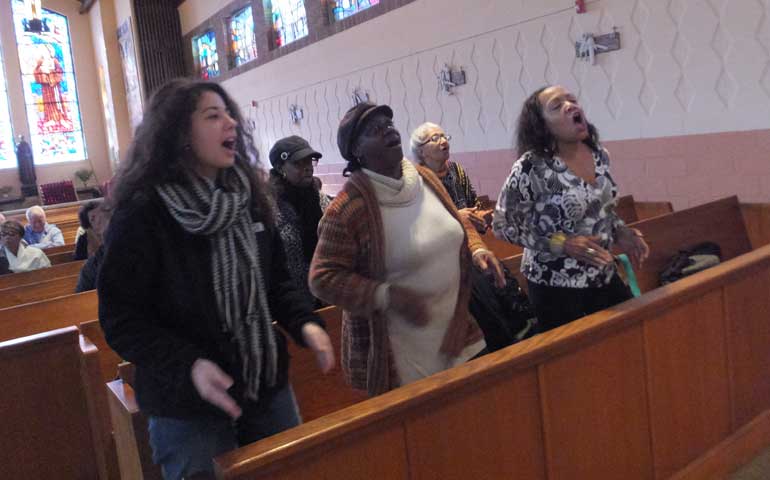 Singers from Christ the King Parish in Jersey City, N.J.

In an era of economic and church downsizing, of ongoing violence and continued inequalities among the races, it may sound naive -- or much too late -- to ask black and white Catholics to "open your boundaries and make a space for the other."

But Social Services Sr. Eva Marie Lumas of Oakland, Calif., did just that when she asked those attending a recent symposium to imagine "what it would feel like to put right relationships at the center of all our lives." Lumas challenged the attendees to envision, and then enact, "a beloved community in which all are welcome and all feel safe."

Deacon Keith McKnight, who organized the annual meeting titled "A Black Catholic Symposium," told NCR he wanted speakers to look at what unites them rather than their differences. McKnight coordinates community relations for the Society of African Missions Fathers, whose headquarters here was the venue of the Nov. 22 symposium. The society sponsors priests and lay missioners to Africa and to African-American parishes in the United States.

Lumas, professor of catechesis and pastoral studies at the Institute for Black Catholic Studies at Xavier University in New Orleans, had previously taught at the Franciscan School of Theology in Berkeley, Calif.

Her remarks to an audience of several dozen Catholics -- black and white, lay and religious, young and old, Filipino and Latino among them -- came two days before the disclosure of the grand jury's decision not to indict white Police Officer Darren Wilson for the shooting death of un armed African-American Michael Brown in Ferguson, Mo. The impending decision hung heavy over the symposium.

Jesuit Fr. Joseph Brown, also speaking at the symposium, said that the presumption that blacks constitute a violent mob is almost two centuries older than the Ferguson case. He dated it to 1831, when states began to pass laws prohibiting the gathering of more than two or three black people after the Nat Turner slave rebellion in Virginia, during which approximately 60 whites were slain by slaves.

Brown, a professor in the Africana Studies Department at Southern Illinois University in Carbondale, said that the government is not doing its job when black men continue to be "targeted" and die at the hands of largely white law enforcement.

"Our children feel trapped," he said. "They can't do anything to escape harassment, intimidation and police scrutiny." No matter how hard they try to be "accountable" and on their "best behavior," it has become evident that guilt is in the eye of the beholder, Brown said. "The state has the power to define the terms by which we live."

The situation of profiling people of color -- especially young men -- means we can't warn them to be careful anymore, Lumas said. "This creates a constant sense of threat and trauma."

Lumas indicated a "certain naiveté" among many African-Americans that "if we do right, they'll do right by us." She said that the reality is starkly different. "It is open season on black men," she said. They are being locked up in ever greater numbers. Statistics indicate that African-Americans without college degrees are 70 percent more likely to be incarcerated than are white men.

Jails "neutralize our men," Lumas said, as inmates cannot vote, go to school or get jobs. The policy of the corrections system is largely, "If we can't put you on a boat, we'll demote you this way," she said.

Lumas challenged her audience and all Catholics to question the underpinnings of U.S. racial attitudes, which are grounded in the belief that "if I can't get what I want, you can't have what you need," she said. She urged a return to teaching all children the meaning of "the common good."

He noted that the idea of the black community as "dangerous and violent" is ingrained in the whole of society. Given this generalization of African-American environs, police are often granted the benefit of the doubt even when their abusive behavior is captured on video and audio recordings.

From the beginning of slavery in America to today, Brown said that blacks and Native Americans have been viewed as the "culturally other" -- as enemies who require constant surveillance. Police, especially in urban areas, are rewarded -- by prosecutors and grand juries -- for being "heroes" who have kept danger out of the way of "normal" human beings, he said.

Brown admitted that he has had a problem saying Mass since translators changed the words of the rite from "for one and for all," to "for one and for many." This alteration reinforces for him "the cultural conditioning of centuries, which tells us 'you don't belong,' " he said.

Blacks have been singing about these issues for 300 years, Brown said. He played and sang the Negro spiritual "Plenty Good Room," which speaks of hope, of the inclusiveness of God and his many dwelling places: "Plenty good room, plenty good room. ... Choose your seat and sit down."

Brown thought Hispanics and Vietnamese need to have their own parish too. In an urban area, "it's OK for all of them to share the same space," he said, noting that putting a Spanish hymnal in a black man's hand means, "If you're singing my song, you're participating in my culture."

Theologians speak out on racism

U.S. Catholic moral theologians have signaled that they don't want to be on the wrong side of racial justice issues that are playing out across the nation in the wake of grand jury verdicts in Ferguson, Mo., and Staten Island, N.Y.

Coming within days of each other late last year, the two decisions both found insufficient evidence to indict white policemen in the deaths of unarmed black men. The verdicts have prompted more than 400 scholars to sign a three-page statement in December titled: "Catholic Theologians for Police Reform and Racial Justice."

The academics said they wanted to go on record in summoning "a serious examination of both policing and racial injustice in the U.S." It is imperative, they said, that Catholic theologians "leave some mark" and "not ignore what is happening in our midst -- as the vast majority sadly did during the 1960s Civil Rights movement."

The statement calls attention to the killings of black men, women and children by white policemen and the failures of grand juries to indict some of the officers. It names the killing deaths of Rekia Boyd (22, Chicago); Eric Garner (43, Staten Island); Michael Brown (18, Ferguson); Aiyana Stanley-Jones (7, Detroit); Tamir Rice (12, Cleveland); and John Crawford (22, Beavercreek, Ohio).

The document's drafters -- led by Tobias Winwright of St. Louis University* and including ethicist Fr. Bryan Massingale of Marquette University and systematic theologian Shawn Copeland of Boston College — look at Garner's dying words of "I can't breathe" and hear the echo of Jesus' breathing "peace be with you" on his disciples. His spirit-filled breath obliges his disciples, then and now, to raise their voices for a just peace in a violent world, according to the statement.

By the end of December, 437 scholars had signed the statement, pledging to:

​*This story has been corrected from an earlier version. Winwright was the lead drafter on the document. .

A version of this story appeared in the Jan 16-29, 2015 print issue under the headline: Black scholars respond to Ferguson.