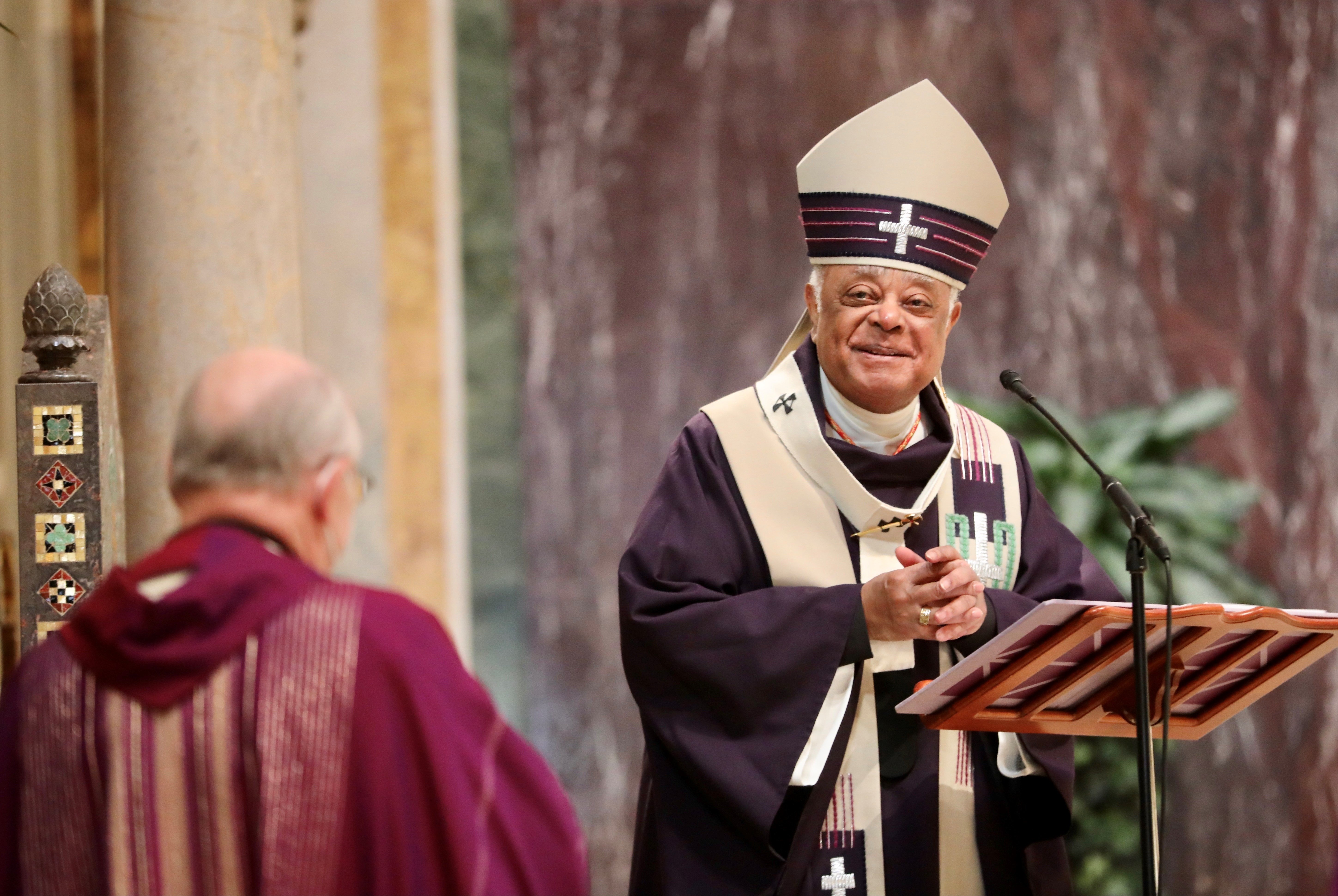 On Nov. 28, 2020, when Pope Francis elevated 13 new cardinals from around the world — including Cardinal Wilton D. Gregory, the archbishop of Washington — the pontiff reminded them of the importance of remaining as "a pastor close to your people."

Returning home from Rome, Cardinal Gregory carried out a busy year of doing just that — celebrating Masses at parishes, visiting schools and supporting outreach programs in the Archdiocese of Washington, amid safety protocols necessitated by the COVID-19 pandemic.

Exactly one year after he was made a cardinal by Pope Francis, Cardinal Gregory was again presiding at Mass — at the Cathedral of St. Matthew the Apostle in downtown Washington for the first Sunday of Advent Nov. 28.

It also was the annual Mass for the Association of Ecclesial Movements and New Communities, various Catholic groups that have a special focus on witnessing to and sharing their faith.

After the Mass, Cardinal Gregory in an interview with the archdiocese's Catholic Standard newspaper and website reflected on his first year as a cardinal and on recent issues facing Catholics.

"The time has flown so quickly, and I've had so many moments during this past year where I was particularly grateful for the opportunity to serve the church in this new position," he said. "It really hasn't changed my ordinary daily routine. I'm still the archbishop of Washington, there are still meetings to go to.

"There are still activities that bring me into the various parishes. That brings much joy to my heart."

Two days before last year's consistory, the soon-to-be cardinal had a surprise invitation from Pope Francis, whom he was able to join for a Thanksgiving Day dinner that included pasta. Due to the pandemic, the consistory itself was on a much smaller scale than usual, with each new cardinal only joined by his priest secretary, and only about 100 people in the congregation at St. Peter's Basilica.

"It was the experience of being inside St. Peter's with the Holy Father," Cardinal Gregory said when asked what he remembered most about the consistory.

"I had been in St. Peter's many, many different times for other ceremonies including being a Communion priest at a ceremony, a canonization that Pope Paul VI did while I was still a student in Rome," he recalled.

"So I had been in St. Peter's on many occasions, but certainly the consistory was a special event because it wasn't just a visit to St. Peter's, it was an encounter with today's Peter."

Over the past year, he has felt "particularly close to Pope Francis, although I haven't seen him since the ceremony of the consistory," Cardinal Gregory said. "That closeness was intensified when he went to Iraq for that visit (in March 2021), how proud I was of his witness of faith and fraternity. Then I was obviously concerned about him when he had his surgery last July, (and concerned about) his recovery."

This past fall Cardinal Gregory went back to Rome for the ordination of the deacons from the North American College at St. Peter's and to claim his titular church — the Church of the Immaculate Conception of Mary in the Grottarossa neighborhood of northern Rome.

The visit "gave me an intense experience of being a priest of the Diocese of Rome, because that's what those titular churches symbolize," he said. "I have a parish in Rome that unites me to those wonderful people, but in a special way to Pope Francis."

With his elevation to the College of Cardinals, Cardinal Gregory also made history, as the first African American cardinal.

Reflecting on his feelings about that one year later, Cardinal Gregory said, "The African American community — through so many notes and cards and letters and emails and text messages – has been so supportive.

"They have expressed both support and affection, but they've also renewed in my heart the deep faith that is to be found within the African American community, a faith that has been tested at times, but that remains strong and vibrant."

Under his leadership, the nation's bishops responded to the escalating crisis of clergy sex abuse by implementing the "Charter for the Protection of Children and Young People" in 2002.

"I always feel that if I stay close to the Lord in my prayer life, at least (staying) on the right path, that being the first is an opportunity to draw the church closer together across cultures and races," the cardinal said.

Asked about the statement on the Eucharist approved by the U.S. bishops during their Nov. 15-18 general assembly in Baltimore, Cardinal Gregory commented on the "anticipatory coverage" of the document — much of which said the bishops would call for denying Communion to President Joe Biden and other Catholic lawmakers who support legal abortion.

Such coverage "raised extraordinarily complex questions," he remarked. "I think the statement was about as appropriate as we could provide, given the climate that we were dealing with."

The final 26-page statement does not address Catholic politicians and abortion; it explains the centrality of the Eucharist in the life and faith of the church and addresses the fundamental doctrine about the sacrament.

The issue of whether Catholic lawmakers who support abortion should be denied Communion "should never be a source of division for us," Cardinal Gregory said.

"I know it has become (that) for some people that have strong feelings one way or the other," he added. "It's a sad statement when the Eucharist, which is to be the sacrament of unity, is used as a divisive expression."

This will be "a primary step to help our people regain an awareness of the importance and the centrality of the Eucharist in the life of the church," he said. "Hopefully Catholics throughout the nation will stop and reflect on the great mystery of Christ being present, body, soul and divinity in the Eucharist.

"If Catholics were confused or unaware of that central mystery," he continued, "I hope both the conversation that preceded it and the issuance of the document itself and the follow-up with the events that will occur over the next couple years will increase our awareness of the great mystery that we have in the Eucharist."

Initiatives undertaken by the Washington Archdiocese under the cardinal's leadership include a "Laudato Si'" action plan, inspired by Pope Francis's 2015 encyclical on the environment.

Launched in August, the plan includes practical ways that parishes, Catholic schools and institutions, and individuals and families can care for creation.

Regarding the greatest challenge he has faced during the pandemic, the cardinal said he misses "not being able to be in touch" with the faithful like before COVID-19 — not being able "to hug, to support, to encourage and to sing with" them.

He lamented "the distance that this pandemic has imposed on all of us."