Catholic school principal: Back to classes will help return to normalcy 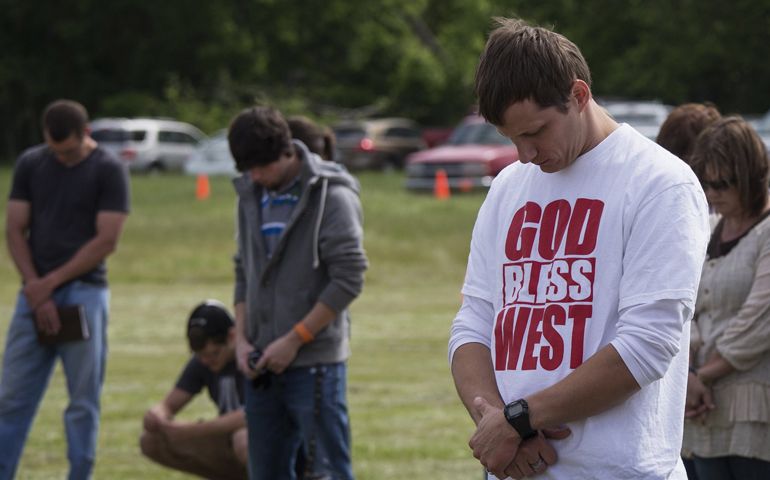 Town residents bow their heads in prayer during an April 21 outdoor prayer service four days after a deadly fertilizer plant explosion in the town of West, near Waco, Texas. (CNS/Reuters/Adrees Latif)

West, Texas — The principal of St. Mary Catholic School in the town shattered by an April 17 explosion said two days later that classes would resume Monday, partly to help return a sense of normalcy to the community.

Ericka Sammon told Catholic News Service that the school day Monday would start with a prayer service. Otherwise, she said, "when the students want to talk about it, we'll let them," and counseling would be made available, if appropriate.

The primary goal for teachers was to give students, indeed everyone, the feeling of normal life resuming, Sammon said.

"It might be the first time for some of them to be excited to go to math class," she said.

The one Catholic school in the town of 2,800 was undamaged by the explosion of West Fertilizer Co. The blast, which all but flattened the plant, nearby homes, apartments and a nursing home, also destroyed a public middle school located within sight of the company, Sammon said.

Though St. Mary's offered to help accommodate the middle school students, Sammon said arrangements were being made for portable classrooms to bolster available space elsewhere in the public school system, which also planned to reopen Monday.

She and other school staff members spent the day after the explosion personally checking on the situations of every family with children enrolled at St. Mary's. She said about 10 families' homes were destroyed and one student lost a parent, a firefighter.

"We're grateful it's not worse," she said.

More than a day and a half after the explosion, the Texas Department of Public Safety confirmed 12 deaths, though the town's mayor told reporters the toll could go higher. Sen. John Cornyn, R-Texas, told reporters after touring the town that about 60 people remained unaccounted for, but that the names had not been compared with lists of people who were in hospitals or who might be safe but simply had not been in contact with authorities.

Hospitals in Waco, about 20 miles south of West, reported treating about 200 people, with about 30 still hospitalized as of Friday.

Sammon told CNS that from what she learned in checking on students and their families, most people's injuries came from flying glass and debris or from structures collapsing around them in the shock wave from the explosion. The U.S. Geological Survey measured a tremor the equivalent of a magnitude 2.1 earthquake. Major structural damage was common in at least a five-block radius of the fertilizer plant and the blast was felt or heard up to 50 miles away.

Sammon said the outpouring of prayers and other kinds of support to the people of West has been overwhelming.

"There has been some good in a really dark time," she said.

"I've always known this is an amazing town," said Sammon, "but this is a real testament to that."

Parish | Catholic school principal: Back to classes will help return to normalcy

US Catholic priests happy with life and ministry, says study