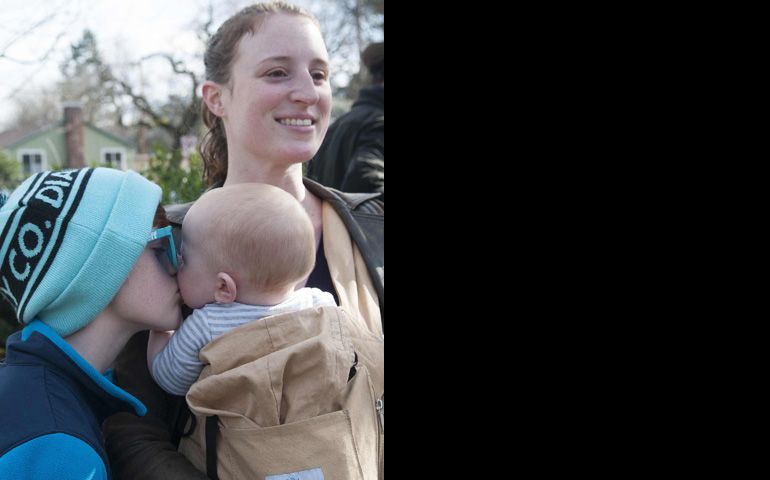 Zen Orion-Orchard, 10, kisses his younger brother, Jackson, on Feb. 4 while their mother, Melissa Orion, looks on. The Ashland, Ore., mom has declined to vaccinate her children. (CNS/Reuters/Amanda Loman)

Washington — A nationwide measles outbreak that began at an amusement park in Southern California has fostered an ongoing debate about people's social obligation to have themselves and their children vaccinated against measles, mumps and rubella and other diseases.

According to the latest figure from the Centers for Disease Control, the current outbreak has resulted in 121 cases in 17 states and the District of Columbia and raised anew concerns about parents who won't immunize their children for a variety of reasons.

Over the years, the Catholic church has raised moral concerns about vaccines manufactured with human cell lines derived from voluntarily aborted fetuses.

It has urged Catholics to push for the development of morally acceptable vaccines, but in the absence of such alternatives, has said Catholics must not reject immunizations and "sacrifice the common good of public health" or their children's well-being.

Just six weeks into the new year, the United States already had a sixth of the total number of reported measles cases for 2014 -- 644. The statistic is even more striking when compared to the number of reported cases from 2001 to 2011: The median number was 62.

The CDC's website states that "in 2000, the United States declared that measles was eliminated from the country" as the result of "a highly effective measles vaccine, a strong vaccination program that achieves high vaccine coverage in children and strong public health system for detecting and responding to measles cases and outbreaks."

But the drop in coverage could contribute to a possible re-establishment of measles in the U.S., according to the CDC. The drop could be caused by people who forget to get vaccinated, people who don't know they need to be inoculated, or those who refuse to get the measles, mumps and rubella vaccine, or MMR, and other vaccines "for religious, philosophical or personal reasons."

"There are a lot of concerns regarding vaccines," Dr. Paul Braaton, immediate past president of the Catholic Medical Association, told Catholic News Service. "Some of them may be overblown. The link with autism we now know came from some bad science and manipulated research out of England, but the problem is that the pharmaceutical companies didn't adequately address these concerns as they came up."

He was referring to a now-debunked -- and retracted -- study linking the measles, mumps and rubella vaccine to autism in young children. That report, issued in 1998, led to a growing number of parents who refused to vaccinate their children against measles.

Apprehension about challenges posed to young children's immune system by the "vaccine load" -- the battery of injections suggested by a typical vaccination schedule -- has prompted some parents to either space out immunizations or opt out of having their children immunized.

"It sounds scary when you think about it by itself," said Dr. Andrew Bonwit, a specialist in pediatrics and infectious disease at Loyola University Medical Center in Chicago.

"It is an immune challenge, but we face a host of immune challenges every single day, just by virtue of the world we live in," Bonwit said, calling such apprehensions "an illogical concern."

"The thing to remember is that these pathogens will never be removed from this world; they will continue to exist," he continued, "so really it's pretty much the difference between a parent who tries to teach their child to swim by throwing them in the deep end of the pool and hoping for the best and one who starts on the shallow end and works them to the other side gradually."

Bonwit explained that "what people want is a 100 percent guarantee of something, but that doesn't exist in science and medicine."

Regarding accounts of children having adverse reactions to the battery of immunizations, he said that has happened in "extraordinarily rare circumstances."

Compared to the "vast numbers of people who have been immunized with no adverse effects and the vast numbers whose lives have been saved," he said, "the numbers are clearly and overwhelmingly in favor of vaccines."

In 2005, the Pontifical Academy for Life released a study titled "Moral Reflections on Vaccines Prepared From Cells Derived From Aborted Human Fetuses" to assist those struggling with the moral implications of getting such vaccines.

The academy said Catholics have a responsibility to push for the creation of morally just, alternative vaccines, but it also said they should not to sacrifice the common good of public health and the well-being of young children and pregnant women because there is no substitute.

The academy finds "a proportional reason, in order to accept the use of these vaccines in the presence of the danger of favoring the spread of the pathological agent, due to the lack of vaccination of children" and that the "burden of this important battle" against injustice in the pharmaceutical industry "cannot and must not fall on innocent children and on the health situation of the population -- especially with regard to pregnant women."

The National Catholic Bioethics Center concurs with this position in a statement on its website.

"Upon use, one should register a complaint with the manufacturer of the products as an acceptable form of conscientious objection," the statement says. "This signals opposition to the wider, morally reprehensible practice of using the unborn as little more than research material for science."

"There is no moral obligation to register such a complaint in order to use these vaccines," it says, adding that "it should be obvious that vaccine use in these cases does not contribute directly to the practice of abortion since the reasons for having an abortion are not related to vaccine preparation."

In 2006, following a major mumps outbreak in the Midwest, Robert Saxer, then executive vice president of the Catholic Medical Association, said that "the bottom line is that vaccines derived from abortions should mainly be avoided and used only when alternatives are unavailable."

"But there is really no reason why those alternatives should be unavailable," he said. "The pharmaceutical companies that manufacture the vaccines have the ability and know-how to produce versions of these vaccines which do not depend on cell lines from aborted fetuses. ... They should be pressured to develop those vaccines to meet the health needs of those who have religious and ethical objections to abortion."

However, the outlook for the creation of vaccines that would avoid such moral and ethical questions doesn't look promising at the moment.

Dr. Kevin Donovan, pediatrician and director of the Pellegrino Center for Clinical Bioethics at Georgetown University, said vaccines currently under development "are not being developed with that in mind."

"Yes, there is a degree of material cooperation" with evil in the case of these vaccines, he said, "but it's still sufficiently small and the benefits from immunization are sufficiently great" for the human person and the common good "that the person is morally justified in receiving immunization until such an alternative can be developed."

Braaton echoed Donovan's remarks, telling CNS: "Of course, if there is no other alternative to an unethically created vaccine, one can choose to use that vaccine, but that is the big concern. There has been no development of an alternative from the pharmaceutical industry."

"We're urged to put pressure on the companies to develop morally acceptable alternatives," he added, "but I don't know why they haven't done that yet. Maybe there's not enough public pressure; maybe it's more beneficial to use the cell lines, I don't know."

Braaton said the Catholic Medical Association will continue to push for development of moral and ethical vaccine alternatives.

"We have grown and become better organized over the years as an organization," he said, "and with that growth we can work better with other groups to put more effective public pressure on these companies. This issue will mostly likely be on the docket at our upcoming meeting in Dallas."

"I also want to clarify that nobody at the Catholic Medical Association is against vaccines," Braaton added. "We think that vaccination is a moral good, that it's good for patients, and that it has benefited society greatly. We have a responsibility as moral agents to protect the common good and to immunize ourselves and our children against communicable disease."