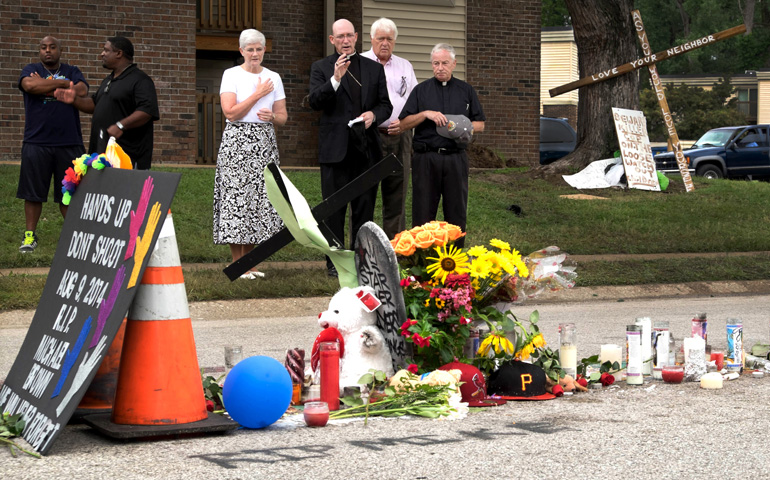 In the midst of the pain and trauma in the community of Ferguson following the shooting death of Michael Brown by a police officer last month, clergy and people of faith are taking a central role in the healing process. Several faith-based groups are active here, each with a slightly different niche to fill.

"This is a community in which this type of violence is not happening on a regular basis," said Trineka Greer of PICO California, one arm of PICO National Network, an organization of faith-based community organizers. Greer, who is originally from nearby East St. Louis, Ill., noted that there have been no murders in Ferguson yet this year -- after two in 2013. She added that if it weren't for recent events, this community of 21,000 people just outside of downtown St. Louis "would be pretty sleepy."

What has been occurring, Greer said, is a "sense, particularly for young black men, in Ferguson that their freedom of movement has always been restricted by the police. [They] know that if they're walking down or driving down" certain streets in town, "they're going to be subject to harassment and interrogation by the police."

This antagonism and mistrust "created a space where something like [the shooting of Brown] could occur," Greer said.

In this light, she said she believes the most important role for clergy is on-the-ground healing.

She noted that there are multiple levels of healing needed: the past trauma of tense interactions with police; the extreme trauma of those who witnessed the Aug. 9 shooting of Brown; those who knew him, or see themselves in him; and the ongoing trauma of the police and military response to the unrest on the community's streets.

Greer said that frequently, as soon as clergy members identify themselves as such, people begin to "pour out" the trauma they have experienced.

"This is a unique role for the faith community ... to start to heal what is broken," Kling said.

One key location for this presence has been the center of the Canfield Green apartment complex, where Brown, 18, was shot by Ferguson Police Officer Darren Wilson. A memorial has emerged at the site of the shooting, and clergy are taking shifts being present there all day.

Clergy have also added their voices to the demonstrations on the streets in Ferguson. They have worked to keep tense standoffs from erupting into violence.

Pastor Nelson Watts Jr., of the nearby El Bethel Church of God in Christ, said simply being out on the street has made a big difference. "We're here to show the protesters that we care, and that we do understand," he said.

Watts came here on his own volition, but sees clergy participation as a group effort. "We feel our presence here brings a calm and a peace to the situation," he said, especially regarding people who come with "negative excitement" and those who were looting earlier in August.

The group Clergy United was formed in the midst of the unrest to plan an ongoing response. Pastors Michael Robinson and Robert White and the Rev. Tremaine Combs came together after seeing a need for coordination.

Affiliated clergy have been visible in and around the marches, wearing a florescent orange "Clergy United" T-shirt over their collared clergy shirt, robes or other outfit. The group's goal on the streets is to interact with the community, Robinson said, as well as to be "a barrier" between police and what White called "the foolishness" that can arise during the marches.

During the more tense nights, clergy walked alongside marchers, often joining in the songs and chants but keeping things from getting out of hand.

"We've asked the police to step back their pressure and their power," White said, "and give us some time with the people, to try to hold the crowd and calm them down."

As the worst of the tension leaves Ferguson, focus is shifting to finding the next steps to greater community healing.

Fr. Art Cavitt said "an emergent hope" is growing in Ferguson in spite of the struggles. Cavitt, in residence at Blessed Teresa of Calcutta Parish in Ferguson, says Catholics, especially, "are nothing if we're not filled with hope."

According to Cavitt, Blessed Teresa and the other congregations of the ecumenical Ferguson Ministerial Alliance are expanding their food pantry efforts and are joining in prayer. The parish is also hosting a weekly rosary prayer service "to promote unity and healing."

Clergy United has a plan for community reconciliation -- or at least, they are putting one together. "We're flying the airplane, but we're building it at the same time," Robinson said.

Clergy United plans to meet with various groups in the community to foster a larger conversation. They have already met with politicians, and plan to connect with police departments in the area and go into local schools.

This response to the crisis in Ferguson is sparking organization in other cities. Clergy United groups have already sprung up in Chicago; Shreveport, La.; Omaha, Neb.; and Detroit, following what Robinson calls the Ferguson group's "model of crisis intervention." In other cities, the focus is on preparing for such a crisis before it occurs, "so that there will be a rapid response."

Meanwhile, PICO and Communities Creating Opportunity are working to bring local clergy and youth together by helping the youth to organize and begin coordinated civic advocacy around issues of race, poverty and policing in their community. Youth, Greer said, both have the energy to take the lead on advocacy and are more typically the direct recipients of the injustice in question.

"Police injustice is meted out against young black men more often than other demographic groups," Greer said. "It was a young black man who was killed. And so they see this as their fight." She added that the youth are "really looking forward" to connecting with clergy on these issues, and that clergy can fill a unique role of "guidance and support" for the youth. Clergy are key to any movement like this, she said, because they have "the authority and the space and the influence to ignite people of faith" to "put their faith into action."

For many involved, the ultimate key to deep healing here is to have honest conversations about the difficult issues around race and injustice in our society. Robinson said Clergy United was formed to "engage the community in healthy discussions and dialogues that will bring about peace and reconciliation."

"The church has a responsibility to have some uncomfortable conversations, really take some risks, and engage in these issues in more powerful ways," Kling said. "We're nice, but that allows these things to happen."

A version of this story appeared in the Sept 12-25, 2014 print issue under the headline: Healing on the streets.