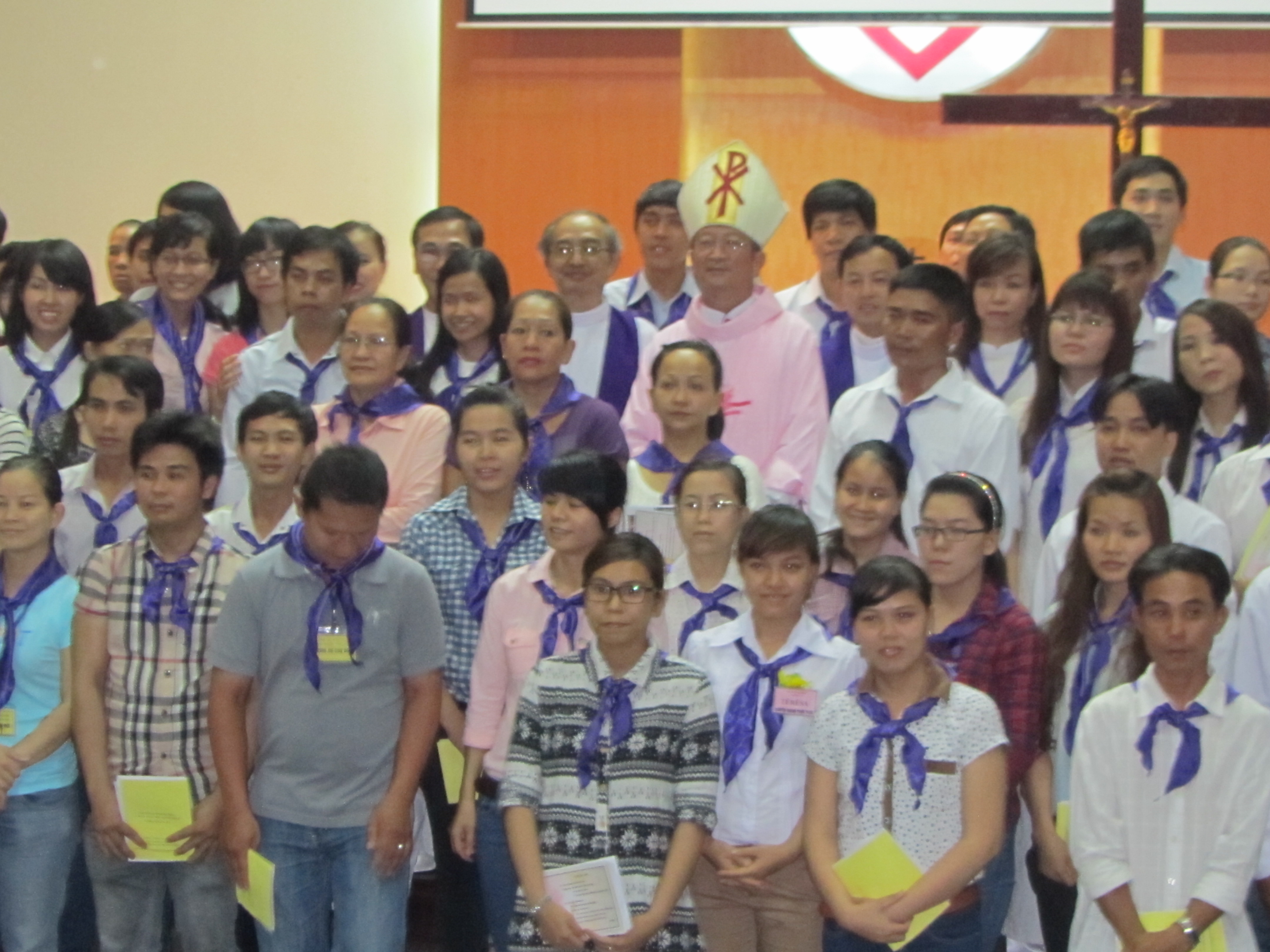 Some 650 catechumens from 32 parishes attended a special ceremony led by Archbishop Paul Bui Van Doc of Ho Chi Minh City Archdiocese at the pastoral center on March 30. Over 350 people among them are expected to receive the sacraments of Christian initiation to become Catholics on this year’s Easter Vigil, April 19.

Some of them shared their faith experiences with NCR.

“I am happy to be a Catholic and I have chosen St. Cecilia as my patroness,” Nguyen Ai Chau, a follower of ancestor worship, said. She started to learn catechism in January and plans to marry next year.

Chau, who works for a local real estate company, said originally she had decided to convert to Catholicism to marry her Catholic boyfriend, but “now I know God chooses me through my boyfriend. I really feel God’s presence in my life and find peace and quiet in mind every when I tell my own problems to Jesus and Mother Mary."

The 30-year-old woman, who loves to sing hymns and regularly attends weekend Mass, said, “The Catholic faith not only gives me lots of moral support but guides my behaviors, thoughts and actions.”

She said real Catholics mean to live a good life and to love and serve people.

Another catechumen, Mary Nguyen Thi Thu, who sat at the first row in the pastoral center’s chapel, said, “My dream will come true soon.” She will be baptized at her parish church next week.

Thu, whose mother is Catholic, said she and her two siblings were prevented from embracing Catholicism by her late Buddhist father. Her Buddhist husband, who died recently, also did not allow her and her two children to follow Catholicism.

“Religious beliefs are absolutely necessary to give people good directions for a balanced life in a society that is seeing a sharp decline in standards of morality,” the 54-year-old woman from Vuon Chuoi Parish said.

The mother of two said she prays that her married children would embrace Catholicism in the future. “Life is meaningless without God,” she stated.

Peter Ta Dinh Vui, who is in charge of the archdiocese’s Catechism for Catechumens and Adults, said most young people who convert to Catholicism are planning to marry Catholics.

Vui, who has worked with catechumens for over 30 years, said some converts want to seek meaning for their life in religious beliefs, while others are inspired by their Catholic friends’ actions. However, many have no intention of doing so but are baptized so they can marry a Catholic.

The southern archdiocese of Ho Chi Minh City, which is the Catholic hub of Vietnam, politically a communist country, recorded 25,396 people including 6,736 adults receiving baptism in 2012. Among adults, only 851 people converted for marriages.

Cardinal John Baptist Pham Minh Man, who resigned as archbishop of the archdiocese on March 22 due to age, told NCR that most adult converts, including communist party members, find peace and life meaning in faith practices. Religions satisfy the spiritual needs of people who have lost directions in an atheist society, he noted.

A local senior priest told NCR that he makes yearly visits to provide sacraments for some officials and their family members at their homes.

“They do not dare practice their faith publicly because they fear being dismissed by the government,” he said.

The Vietnamese Catholic church, unlike most local churches across the world, requires Catholics to marry other baptized Catholics in order for the ceremony to take place in a church. The practice common in the rest of the world – dispensations for non-Catholics arranged canonically by a diocese – is not followed here.

As a result many people are baptized so they can marry a Catholic yet have no intention of practicing their faith. Often a Catholic spouse is under pressure from Catholic parents to marry another Catholic. This habit has been a great source of pain for many couples. It also is seen by more open-minded and aware Catholics as being against the common practice of the universal church.

Teresa Pham, who married a Buddhist seven years ago, said she is “deeply unhappy to live with my husband and among his Buddhist family members.”

She said her husband pretended to convert to Catholicism to marry her. He has no interest in Catholic practice, and has said, “I do not believe in God,” she recalled.

The mother of two said he does not allow her to set up an altar to God in their room or to have their children be baptized, even though he promised before they married that he would.

Pham, 36, said she quietly had to have her children baptized without her husband.

A parish priest who asked not to be named said many converts ignore their faith practices after getting married, and some even ban their spouses and children from attending services at church.

The 75-year-old priest said a few of them are able to practice their faith to some extent, thanks to joining catholic groups, or being inspired by real Catholics.

“It is very hard for them to have a faith experience,” he admitted.

The priest who serves 4,000 parishioners said local Catholics are encouraged to visit converts and establish good relationships with them, as well as give them material and spiritual support such as reminding them to attend church activities. This is a way to accompany them on the faith journey.

He said some 30 people a year in his parish convert to Catholicism to marry local Catholics.

Converts bear witness to the Gospel

During the March 30 ceremony, Teresa Nguyen Thuy Kieu, who converted from Buddhism in 2005, told NCR that that her Catholic husband inspires her to be a real Catholic.

Kieu, serving as a catechist and as a member of a choir and the Legion of Mary from Ben Hai Parish, said she spends two evenings a week teaching catechumens basic prayers and communicating her own faith experiences to them. She is busy running wedding services for a living but tries daily to go to church.

The mother of two said last year doctors asked her to abort her second pregnancy as the fetus had a possibility of being disabled. She refused because she and the Catholic church view abortion as murder. Although she gave a premature birth to a baby boy after only 30 weeks, “the boy now is 10 months old, grows normally and weighs 22.7 lbs. (10.3 kg). I thank God for answering my prayers,” she said.

“I am also guided by Pope Francis. He teaches me how to love others, regardless of their backgrounds,” she said. She is moved and fired up by the pope who lives in evangelical poverty and loves all people, shown especially by kissing the feet of prisoners, she noted.

Kieu said she is happy that her mother, sister-in-law and 11 nephews and nieces were inspired by her faith experiences and converted from Buddhism to Catholicism.

Another convert, John Baptist Nguyen Huu Cau, was released from a prison on March 22 after serving his 32-year sentence for accusations of criticizing government officials.

Cau, 70, shared his faith experience in prison to Mass-goers at the Our Lady of Perpetual Help Church on March 30.

He said in prison fellow Catholic prisoners taught him basic prayers and how to recite the Rosary. Jesuit Fr. Joseph Nguyen Cong Doan who was then a prisoner baptized him on Easter in 1986. Cau was kept in chains and used them  to pray the Rosary. He prayed and sang hymns by himself in prison; he said that gave him physical strength and hope to survive until now.

He said he has no longer any feud with those who persecuted him; he tried to love them.

Overall the Catholic church in Vietnam needs more lay missioners to bear witnesses to the Gospel among people, if it wants to do evangelization effectively.