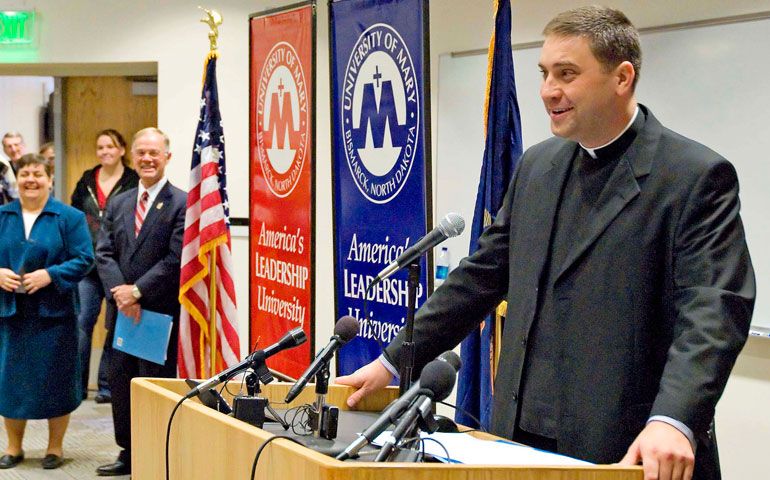 Ideological and theological fissures in the U.S. Catholic higher educational landscape are in clear view when discussion of the Cardinal Newman Society takes place.

For its part, the organization -- based in Manassas, Va. -- defines its mission as helping "renew and strengthen Catholic identity in Catholic higher education" and pounding home adherence to Pope John Paul II's 1990 apostolic constitution on Catholic colleges and universities, Ex Corde Ecclesiae.

For example, Jesuit Fr. Gregory F. Lucey, president of the Association of Jesuit Colleges and Universities, declares that the Cardinal Newman Society "has not and continues not to have any official standing within the Catholic Church, nor within the academic community" and that it "lacks the integrity to be a credible resource on Catholic higher education."

The founder, president and CEO of the society, Patrick J. Reilly, counters that "the shared concerns of thousands of faithful Catholic families … rightfully deserve a voice in Catholic education," and that the society provides that.

The youngest U.S. Catholic college president backs Reilly on that front. Fr. James P. Shea, 37, at the University of Mary in Bismarck, N.D., remarked, "One needn't be a tenured academic to care deeply about Catholic identity and fidelity to mission in the church's institutions of higher learning. It's probably a sign of health and renewal in the church that students and families would so much value Catholic higher education that they would seek assistance from printed or online guides to Catholic colleges, including the one published by the Cardinal Newman Society."

Shea points out that there "are many people of different convictions who are keenly interested in Catholic identity. On one hand, I think it's important to treat the question with appropriate nuance. On the other hand, these are days in which transparency and accountability are very important for higher education."

It is unlikely that Jesuit Fr. Stephen V. Sundborg, chair of the Association of Jesuit Colleges and Universities' board, would argue against transparency and accountability, but he certainly would not invite the Cardinal Newman Society as an arbiter. The association's board is made up of the 28 presidents of Jesuit colleges and universities, just more than 10 percent of the more than 262 Catholic institutions of higher education in the U.S.

In a statement provided to NCR, Sundborg said, "We do not view the Cardinal Newman Society as a credible representative of the mission and practice of Catholic higher education in the United States. Each of us as president of a Jesuit college and university is aware of the communications, inquiries, and pressure tactics of [the Cardinal Newman Society], but we do not pay attention to them, give them credence, and they do not influence our decisions or policies."

The Cardinal Newman Society is well-known for its role in controversies over speakers and course offerings on Catholic campuses. Catholic college and university leaders who have come within the group's crosshairs describe "blast communication" tactics that include waves of protest emails, letters and calls to bishops and college officials.

Jesuit Fr. Stephen Privett, president of the University of San Francisco, asks, "The real mystery is who in Rome listens to them and why?"

Cardinal Raymond L. Burke is one answer. Burke, who heads the Vatican's Supreme Tribunal of the Apostolic Signatura, is the "ecclesiastical advisor" to the society's Center for the Advancement of Catholic Higher Education, recently relocated to Mount St. Mary's University in Emmitsburg, Md.

Multiple emails to Burke at his Vatican office were unacknowledged.

According to a Newman Society news release, Burke was a primary consultant -- along with other "Church officials, college leaders, canon law experts and theologians" -- in preparation of a "special report" released in July and written by Reilly and Charlotte Hays, the organization's director of campus news and publications.

Titled "A Mandate for Fidelity: Pope Benedict Urges Compliance with Theologians' Mandate," the narrative calls for Catholic colleges and universities to require any professor of Catholic theology to obtain a mandatum as a condition of employment and to make public which professors have one and which do not.

Ex Corde Ecclesiae stipulates that Catholic college and university theology teachers obtain a document from "competent ecclesiastical authority" -- normally the local bishop -- that acknowledges he or she is "teaching within the full communion of the Catholic Church," say 2001 guidelines adopted by the U.S. bishops on the implementation of the papal instruction.

In essence, the Association of Catholic Colleges and Universities (which represents 90 percent of those institutions), the Jesuit association and others would inquire, "What makes you think you have the authority to make such demands?"

Addressing U.S. bishops from Colorado, New Mexico, Arizona and Wyoming during their ad limina visit to Rome last May, the pope emphasized compliance with Ex Corde in the appointment of theology instructors at U.S. Catholic colleges and universities.

The pope told the bishops the mandatum was important because "of confusion created by instances of apparent dissidence between some representatives of Catholic institutions and the church's pastoral leadership."

"It is not surprising that Pope Benedict has said that the mandatum is 'especially' important to the 'reaffirmation' of Catholic identity in Catholic colleges and universities," Reilly wrote in an email to NCR. "Theology professors have rights that should be respected, but so do Catholic families. And Catholic institutions have the obligation to teach in fidelity to Catholic doctrine. We hear from Catholic parents and students who consider it a matter of simple justice that their sons and daughters be able to know which of their theology professors have the mandatum and teach in full communion with the Church."

Higher education officials as well as bishops have taken differing views of the mandatum. Mary Lyons, president of the University of San Diego, pointed to "confusion" surrounding the mandatum, and added, "Some felt it inappropriate to treat our theology faculty as if they were clerics in need of 'faculties.' "

Others express concern about potential infringement on academic freedom and quote the Cardinal Newman Society's namesake in the process: "I shall drink to the pope, if you please, still, to conscience first, and to the pope afterwards."

Some see the agreement between the teacher and bishop as a private matter. Others such as Burke and Archbishop-emeritus of Omaha Elden Curtiss press that the mandatum is a public statement.

Also consulted in the preparation of "A Mandate for Fidelity," Curtiss comes down on the side of ordinaries being willing to release the names of collegial theology teachers within their sees who do or do not possess a mandatum.

"People need to know if someone is teaching authentic Catholic doctrine," he said. "If a person purports to be teaching Catholic theology, then he needs a mandatum. If he's teaching something else, then name it."

Saying the Cardinal Newman Society can be "strident" at times, Curtiss nonetheless said, "From my point of view I am glad there is an organization that keeps focusing on Ex Corde and especially the mandatum. They are hardcore orthodox people who … have tried to keep college and universities honest in terms of Catholic identity."

The bishops' 2001 guidelines state that "the mandatum is an obligation of the professor, not of the university."

That document also instructs that "theologians who have received a mandatum are not catechists; they teach in their own name in virtue of their baptism and their academic and professional competence, not in the name of the bishop or of the Church's magisterium."

A news release quotes Burke as describing the mandatum as "a public declaration, in writing" and that "people have a right to know so that if you, for instance, are at a Catholic university or parents are sending their children to a Catholic university, they know that the professors who are teaching theological disciplines … are teaching in communion with the Church."

Reilly underscored that the Cardinal Newman Society launched its Center for the Advancement of Catholic Higher Education to enhance just that.

"The center is not distinct from the Cardinal Newman Society. It is a division that represents a key aspect of our work to help renew and strengthen Catholic identity in Catholic higher education," Reilly explained. "We launched the center prior to Pope Benedict XVI's visit to the United States in 2008, specifically to support those colleges and universities that are committed to living out the Holy Father's vision of faithful education. The center focuses on facilitating collaboration among college officials to strengthen Catholic colleges and universities."

Asked what Vatican offices or officials the Cardinal Newman Society might consult, Reilly said, "We consult hundreds of various people, including college presidents, trustees, faculty members, administrators, priests, sisters and bishops -- yes, some of them in Rome."

[Dan Morris-Young writes for NCR from Washington state. His email address is dmyoung@ncronline.org.]

Other articles in the series