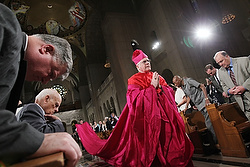 For the (I’m sure very few) NCR readers who have a little trouble with Latin – and with apologies to Latin experts who may find a minor error or two in the above – “On April 24, 2010, Edward James Slattery, bishop of Tulsa, Okla., celebrated the Mass in Latin in the extraordinary form – that is, in the Tridentine Rite – in the Basilica of the National Shrine of the Immaculate Conception. He delivered his homily in English. More than 3,000 people attended the liturgy.”

More relevant to me in the April 24 event in Washington were several elements:

First, there were no demonstrations outside or inside the shrine by clergy sex abuse victims after retired Colombian Cardinal Dario Castrillon Hoyos withdrew as principal celebrant of the Mass.

Castrillon, former prefect of the Vatican’s Congregation for the Clergy and former president of the Pontifical Commission “Ecclesia Dei,” which oversees and promotes use of the Latin Tridentine rite in the Roman Church, made major news just a week before the shrine Mass when a French newspaper revealed that in 2001 he had praised a French bishop for breaking the law and refusing to turn over to civil authorities a priest engaged in sexual abuse of minors. Castrillon not only did not apologize for his letter; he reaffirmed it and said John Paul II had urged him to send it to bishops around the world.

Second, for the first time in my life – although as an altar boy in the 1950s into the late ’60s and as a seminarian for nearly 12 years I participated in numerous pontifical liturgies the Upper Midwest and in Washington – on April 24 this year I finally saw the grandiose display of the “cappa magna,” the 20-yard-long brilliant red train behind a bishop or cardinal that has come to be one of the symbols of the revival of the Tridentine Mass.

Fifteen minutes before the Mass, Slattery processed up the shrine’s main aisle wearing the extravagant cloak, held up in back by a young altar server; before the main altar, there was a magnificent turn to exit stage left, at which point the cappa magna stretched almost the entire width of the sanctuary in front of the main altar.

In the actual liturgical procession starting the Mass 15 minutes later, Slattery was dressed not in the cappa magna but in normal liturgical robes, walking up the aisle in an alb and chasuble and carrying a crosier.

Third, and to me most important, throughout more than half an hour of pre-Mass entertainment with beautiful Latin music by an a capella choir (including Giovanni Pierluigi Palestrina’s Tu Es Petrus and Thomas Tallis’s O Sacrum Convivium) and into the full first half-hour of the Mass, the entire basilica congregation of more than 3,000 sat passively as an audience to a musical concert, with nary a word to say in the liturgy.

The shrine’s magnificent pipe organ played instrumental accompaniment to the nearly 20-minute processional as altar servers of all ages (but only males), knights of various Catholic organizations, deacons, priests and a variety of other ministers processed to the altar. Many of the priests and deacons bore pomped birettas, the stiff square black caps once worn by all priests and seminarians in choir.

As the procession ended, the choir began to sing the Introit as the ministers accompanying Slattery engaged in a slow, silent pageant around the altar that included the old “Introibo ad altare Dei” antiphon from Psalm 42 (now 43) and extended to the Introit, Kyrie Eleison and Gloria, with some incense thrown in between.

It wasn’t until the Collect that any of the 3,000-plus Catholics filling the shrine’s pews and aisles actually heard a voice from somewhere near the altar.
t
By that point I had come to realize that this Tridentine liturgy was an elaborate ritual manifestation of ecclesiastical rank, not a Mass in conformity with the fundamental Vatican II mandate for full, active participation by the faithful.

A minor complaint, but certainly relevant for the Paulus Institute, which is devoted to promoting the Tridentine Rite and sponsored the Shrine Mass: The pamphlet for the Mass had several egregious typos in the Latin versions of the Mass’s prayers and Scripture passages.

In a quick reading before the Mass, I noticed that it had, in the prayer following the Confiteor, “Et plebs tea laetabitur in te” (obviously, “tua” was intended); and in the Introit, “et omnis mansuetudinus eius” – obviously should have been “mansuetudinis” – and in Peter’s epistle “Galatic” instead of “Galatiae” and “varlis” instead of “variis.” Also obvious in the Alleluia before the Gospel was the misprint “flilis” instead of filiis for reference to “the children of men.”
t
The Mass marked the fifth anniversary of Pope Benedict XVI’s formal inauguration into his ministry as pope.

US Catholics urged to renew commitment 'to defend' life during October

Most Americans look so kindly on churches, they might even go sometime