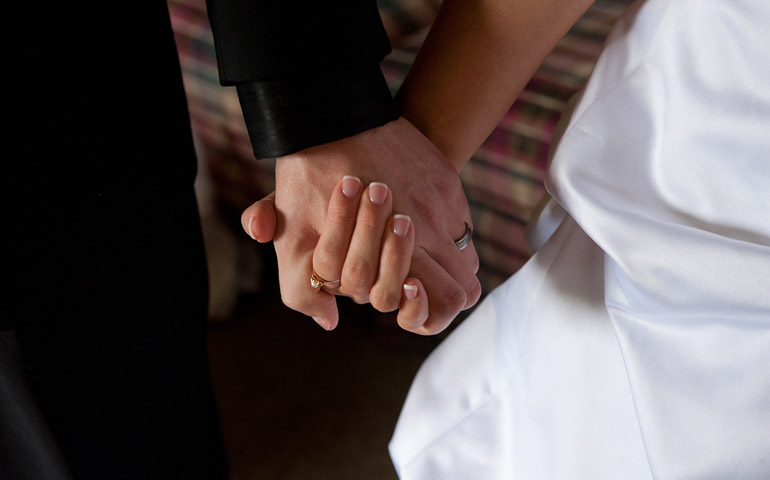 The number of Catholic marriages in the United States is at its lowest point since 1965.

Georgetown University's Center for Applied Research in the Apostolate keeps records of Catholic church statistics going back to 1965, tracking such things as the total number of priests, the Catholic population of the United States, and the number of baptisms and marriages per year.

"There's no definitive answer" for this trend, according to Mark Gray, a senior research associate and poll director at the center. He cited some of the leading hypotheses about the decrease.

"We're seeing an increase in cohabitation," he said, which can "create a hurdle to receiving the sacrament of marriage, depending on the parish or diocese's policies," Gray said in an interview with Catholic News Service. "There's also the notion of a destination wedding trumping the traditional notion of getting married within the church."

And there has been "no increase in Catholics marrying non-Catholics that might lead us to believe that they're marrying in other churches," he said.

"Some things have changed culturally. ... The church just isn't seen as important" to many young Catholics, Gray said.

Tim Staples, director of apologetics at Catholic Answers in El Cajon, Calif., told CNS that "though a particular bishop may grant permission for a Catholic to be married outside of an actual Catholic church, the law of the church does not permit it, ordinarily speaking.

The Catechism of the Catholic Church teaches that "the celebration of marriage between two Catholic faithful normally takes place during Holy Mass, because of the connection of all the sacraments with the paschal mystery of Christ."

The United States also sees "a very large share [of annulments] that occur in the church globally," according to Gray. "It's a process that takes some effort, sometimes some investment. It's a quasi-legal process, which is simply not practical in some parts of the world like it is in the U.S.," he said.

However, even the United States is seeing a lower number of annulments, which have dropped from 60,691 in 1985, the earliest data available, to 18,558 last year. "Divorce is becoming less common" in the U.S., according to Gray. "In aggregate terms, fewer marriages means fewer divorces."

Despite these numbers, Gray remains optimistic about the future of the sacrament of matrimony.

With regard to young people in the church, Gray said that "millennials are a little more traditional, a little more romantic and more interested in marrying in the church. They're looking for their soulmate ... so we're starting to see that sort of a cultural shift among the youngest generation of Catholics."

Last October, Jeff and Alice Heinzen, a married couple from Wisconsin, served as auditors to the extraordinary Synod of Bishops on the family. Alice is director of the Office for Marriage and Family Life in the diocese of La Crosse and Jeff is the president of McDonell Catholic Schools in Chippewa Falls.

At the synod, they said, they observed a reverence for marriage, a profound love for families and a grave concern for the pastoral challenges that families face across the globe. All of the testimonies, discussions and personal stories gave witness to the light and darkness of family life in every corner of the world.

One of the several "takeaway" messages of the synod for American Catholics, according to the Heinzens, is "to remain accountable to the truths that come from God [when it comes to marriage]. We must never stray or be led away from the Gospel message when we deal with families."

"Perhaps the greatest challenge [to marriage] both here and abroad," they told CNS in a joint email, "is the triumph of self-reliance over self-sacrifice. Today's culture values independence over interdependence. The need to commit oneself to another in marriage makes little sense when the perceived outcome is 'me' and not 'we.' "

However, like Gray, the Heinzens also see a cultural renewal emerging on the Catholic marriage front.

"One of the most positive cultural trends that we see is a shift in catechesis from a child-centered focus to a parent-centered focus," they said. "This trend allows parishes to utilize the basic desire found in most parents' heart to provide the very best for their children. ... This shift in the catechetical approach is bearing great results because parents are learning how to become primary educators for their children."

As the U.S. bishops' 2006 teaching statement "Married Love and the Gift of Life" puts it, marriage "is a lifelong covenant of love between a man and a woman. It is an intimate partnership in which husbands and wives learn to give and receive love unselfishly, and then teach their children to do so as well."