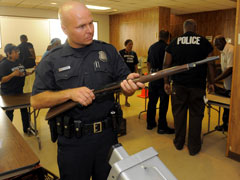 Detroit Auxiliary Bishop Donald Hanchon and Detroit Police Chief Ralph Godbee volunteered at the event that saw 365 guns, including six assault weapons and a handful of sawed-off shotguns, turned in and $16,820 handed out.

"Many households in our city are going to feel considerably safer tonight because of the weapons people from the community chose to turn in," Hanchon said in a press release from the archdiocese.

"I'm proud of those who worked on this, and it says something very, very good about the people of Detroit," he said.

From the beginning of this year to Aug. 26, Detroit has seen 240 homicides, many caused by gun violence, according to statistics on the Detroit police website.

While watching a news report about one of these deaths, Hanchon grew deeply concerned, questioning "what he could do" for his community, he told NCR.

"I wanted to do something" to help diminish violence in the area, said Hanchon, who is moderator of the archdiocese's Central Region, which includes 58 parishes in Detroit, Hamtramck and Highland Park.

Hanchon shared his concerns with Detroit's archbishop and his fellow auxiliaries, who discussed what Catholics could do to stand against violence and to support the greater community. During this discussion, the idea of a gun buyback arose.

St. Cecilia Parish, under the leadership of pastor Fr. Theodore Parker, has hosted several gun buybacks in the past and found the programs to be successful.

A special collection taken up in in area Catholic parishes raised about $18,000 to support the gun buyback.

Detroit police conducted the "no questions asked" buyback program. The police check the guns for any connections with crimes and then destroy them.

All payments to those who volunteered to sell their firearms received cash on-site. Those who gave long guns and/or nonoperational weapons received $25, handguns received $50, and assault firearms were purchased for $100.

"We received just wonderful support from the men and women of the Detroit Police Department and Chief Ralph Godbee, the city of Detroit and Mayor Dave Bing, plus enthusiastic participation, not only from those who turned in their guns but also from the volunteers here," Hanchon said.

Hanchon said he hopes the churches can host other events in the future to keep awareness of violence before the community.

He said that Corpus Christi Parish is planning a series of recreational and reflection sessions to bring people together "talking about issues that matter."

An ecumenical group will also be conducting neighborhood walk-throughs that will include people from all faiths. The walks are not meant as protests, but as community-building exercises, he said.

The goal is to create an inclusive welcome to members of various neighborhoods in Detroit, he said.

Catholic parishes have teamed up with initiatives falling under the "Safety in the City" theme Detroit police have created to diminish violence, said Joe Kohn, Detroit archdiocese communication officer.

Cardinal George back in hospital for hydration issues, pain management