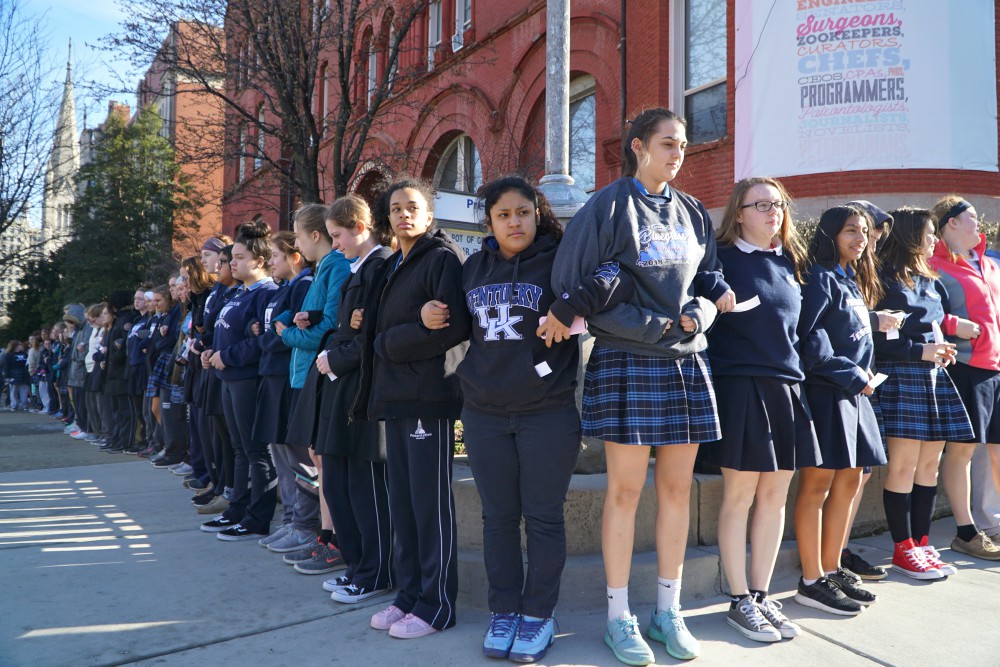 Presentation Academy students stand arm in arm on the sidewalk in downtown Louisville, Kentucky, after walking out of class March 14, 2018, to call attention to gun violence. (CNS/The Record/Marnie McAllister)

In a recent interview, Donald Trump claimed that Catholics "have to be with President Trump," citing his pro-life views and his defense of access to guns. What the president conveniently ignores is that the Catholic Church condemns greed, the exploitation of the poor, and the polluting of God's creation, and he ignores nearly everything else about Catholic social teaching. It was especially puzzling to see him claim that his support of the Second Amendment should endear him to Catholics specifically.

In many ways, the COVID-19 pandemic has held a mirror to Americans generally and to the church specifically. How do we care for the vulnerable? How do we protect ourselves, our families and our communities? How do we react when we are afraid?

For too many Americans — including far too many within the church — the answer to that last question is particularly shameful. Americans have been buying guns in record numbers. Those upset with states' and cities' policies toward social distancing have carried weapons in their protests, not peaceably remonstrating their government for redress of grievances as much as implicitly threatening officials who do not cave to their demands.

The church, though, does not teach that we should act in fear, but teaches that we should act in love. Our bishops have long been at the forefront of anti-gun-violence activism, and Cardinal Blase Cupich of Chicago and Bishops Mark Seitz of El Paso, Texas, and Edward Braxton of Belleville, Illinois, have spoken out against violence in our communities.

The organization I lead, Pax Christi USA, has also been vocal about the need for reform of gun laws as well as the reform of our hearts. We serve a God who is love, mercy, compassion, justice. We see a Jesus who did not defend his own rights with the threat of violence but willingly gave himself up for us, and we strive to act more and more like him. We want to seed the reign of God here on Earth.

It is plain that the United States has a gun problem, and the race to purchase guns in the midst of a medical emergency is only the latest manifestation of that problem. One hundred Americans are killed by guns every day, with hundreds more injured, through murder, domestic violence and other crime, and through suicide. Ninety percent of Americans — including a majority of gun owners and majorities of both parties — agree that there should be background checks on all gun purchases.

I have been honored to join an interfaith mobilization of religious leaders to work toward the goal of reducing gun violence. While we have theological differences, we all pray for peace to prevail and we are committed to ending gun violence in the United States. This group will work to elect candidates who pledge to enact common-sense gun regulations to local, state and national office.

The scourge of gun violence is tearing our communities apart through crime, murder, school shootings, domestic violence and suicide. Killings on the streets create cycles of revenge. Each act of violence does more than harm the victim: Each act victimizes the friends, parents, grandparents, parishioners, coworkers and children, in addition to the target of the violence.

Trump misunderstands Catholic social teaching. The widespread ownership and use of guns in our society is not something that the church supports. This president's support of gun ownership and other harmful social actions goes directly against the church's respect for life.

"For this president to call himself pro-life, and for anybody to back him because of claims of being pro-life, is almost willful ignorance. He is so much anti-life because he is only concerned about himself, and he gives us every, every, every indication of that," Pax Christi USA's bishop-president, Bishop John Stowe of Lexington, Kentucky, said about Trump during a July 31 webinar.

As Catholics go to the polls or mail in our ballots in November, we must strive to honor the dignity of individuals made in the image of God throughout their lives. Common-sense gun regulations are supported by a majority of gun owners and majorities of both parties. Let's work to elect candidates who are willing to enact gun sense.

[Johnny Zokovitch is the executive director of Pax Christi USA. He is a faith leader with the Everytown Interfaith Mobilization Partnership.]