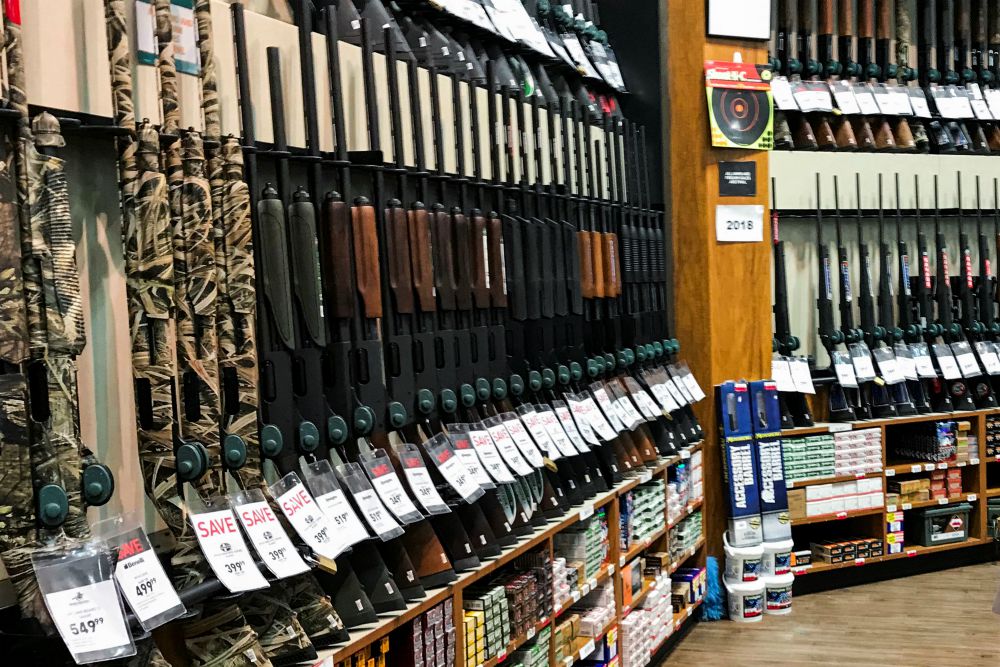 Rifles are seen inside the gun section of a sporting goods store. (CNS/Reuters/Eduardo Munoz)

Several weeks ago, MSNBC commentator Joe Scarborough popularized the name "Moscow" Mitch for the Republican six-term senator. Seems that he lobbied for an economic development deal that would benefit Kentucky — one with ties to Russia.

August began with the mass shooting at an El Paso, Texas, Walmart, followed by terror just hours later in my former residence of some years, Dayton, Ohio.

I graduated from the University of Dayton in 1976; my stepfather was stationed at Wright-Patterson Air Force Base there; a woman I loved for 25 years and lost to cancer at age 55 is buried there.

So you see, Sen. McConnell, Dayton is more than just a word or a place to me.

A Washington Post op-ed, echoed by various talking heads on MSNBC, suggested that the average American's attention span on a mass shooting dwindles after three weeks.

Different people that MSNBC went to apparently agreed. Not so in my case.

Neither is my attention span — The Washington Post's shrewd observation duly noted - just limited to a mere three weeks.

As for the Oregon District in downtown Dayton, Ohio, I could walk it blindfolded. My favorite record store, Omega Music, stands at 318 East Fifth Street, the district's official entrance.

There is Bonnett's Bookstore (502 East Fifth), for used books and magazines; Feathers Vintage Clothing Store at 440 E. 5th for fedoras straight out of gangland Chicago, and, of course, Ned Peppers Bar.

I contacted your spokesperson, Robert Steuer, who quoted you as saying, "I've tasked three of my committee chairmen with talking to our own party members, and the Democrats as well."

Why the delay in talking to the loved ones of those in Dayton and in El Paso and Odessa, Texas, Senator? August ended with a total of 53 people slain in these 38 mass shootings, and I want to know, how many more people have to die before you do something?

I now wish to take aim with several of your positions.

You say, "We're going to begin discussions over the August break, and hopefully we'll be in a position to agree on things, on a bipartisan basis and go forward and make a law."

Senator, you are in a position to do something right now. Not after breakfast, not tomorrow, not next week, now. Not after checking the size of your campaign bank account, which comes courtesy of the National Rifle Association.

You have been bought and paid for, just like your boss, President Donald Trump, who is Russian owned and operated.

Both of you are backing down on background checks. Even if you were standing firm on them, I would still be writing these words: Background checks are simply not enough.

What do I want? Plenty. I want those damned weapons of mass slaughter off the shelves at Walmart totally, along with their ammunition. I want complete background checks in gun shops and at gun shows, right down to the size of the purchaser's underwear.

And I want the assault weapons ban reinstated.

You accuse the Democrats of wanting to "engage in ... endless point-scoring, after one of these awful, awful, events."

Well, Senator, oh dear Lord, when are you going to point the finger where it belongs?

I followed coverage of the El Paso and Dayton shootings that weekend, and only heard one person chalk them up to mental illness. That was the occupant of the White House.

The El Paso shooter even confessed to his true motive.

Something could have been done over these past four weeks, Senator. It was not.

Lawmakers could have ended their recess, flown back to Washington, and possibly ended — if not Odessa, the next one after that. It is out there, somewhere.

On Oct. 8, I will travel to Dayton for my late lady friend's birthday. I will visit the cemetery where she rests but not brood about her lost years.

Nor will I curse the horrible disease that took her life.

Then I will visit the Oregon District and my favorite haunts, maybe even have some dinner. And hope to God, Senator, that I don't get shot, too.

[Robert Alan Glover writes for the Catholic News Service, the Tennessee Register in the Nashville Diocese, and Faith magazine in the Memphis Diocese. He lives in Lexington, Kentucky].