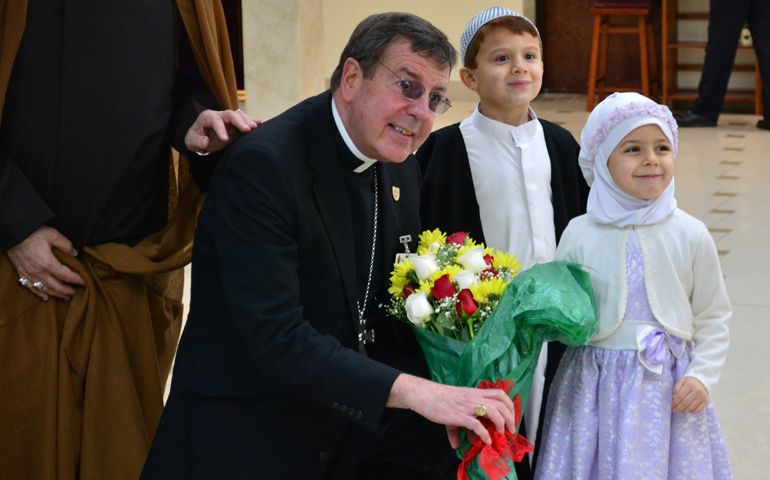 Clergy, religious and laity in the Detroit archdiocese on Friday will convene for the archdiocese's first synod in almost 50 years. "Synod '16: Unleash the Gospel" — the official title — "is both an event and a process that sees people … gather to discuss important matters of faith" according to a press release from the archdiocese.

In the release, Detroit Archbishop Allen Vigneron also stated that the synod serves two roles: to focus on the missionary purpose of the church and to change the "DNA" of the archdiocese.

"The focus of this Synod is evangelization, to attempt a radical overhaul of the Church in Detroit, a complete reversal of our focus from an inward, or maintenance-focused church, to outward, or mission-focused church," according to the release. The purpose is also "to transform the very culture of our Archdiocese — how we work, how we pray, how we minister, everything — so that in everything we do, we are more effective witnesses to the Gospel."

Vigneron told NCR that some of the inspiration for this "radical overhaul" came from Pope Francis' apostolic exhortations Evangelii Gaudium and Amoris Laetitia and the Aparecida document from South America, which Francis helped write prior to his appointment as pope.

"We often quote Aparecida that 'the best thing that's ever happened is to know Christ and the best thing we can do is to share Him with other people,' " said Vigneron.

"So the new evangelization is what I think the [Second Vatican] council has asked us to consider and my way of looking at this is that since the council ended, we've been getting ourselves ready to do this second phase, this missionary phase," he added.

"[The APC] really looked at the faith life of the individuals, [and in] doing that, we've really come away with a diverse gift," said Msgr. Ron Browne, synod secretary.

Diversity was something Vigneron actively sought during the selection of members for the synod.

"This was very much on the mind of the archbishop when [the application process] was being done," said Browne.

"Also age with a bit of a bias, I'll be honest, toward youth and young adults," he added. "We need to know what they think and how they think and they need to be part of the synod. That's not the group you usually get. We needed to be very intentional about inviting them to the synod."

While not all of the 1.3 million self-identifying Catholics in the archdiocese could be physically present for the three-day event, the synod is actually the culmination of multiple archdiocesan wide events dating back five years.

In 2011, Vigneron formed the New Evangelization Initiative to evaluate the next steps for the archdiocese. Although the idea for a synod was in the back of Vigneron's mind, that wasn't his immediate concern.

"[The synod] was an important idea that I had but I really wanted to have the leadership team engaged," Vigneron said. "And so once we began to think about who we are and what we should think about, then we took up the question of whether or not the synod would be a good idea. And across the board, it was endorsed."

It wasn't until May 2015 that Vigneron officially announced Synod '16. The archdiocese then held a variety of events aimed to include the greater archdiocesan community. A prayer service titled "Encounter Christ!" was held at more than 40 parishes in the archdiocese from fall 2015 through summer 2016, with more than 10,000 participants.

In the spring, the archdiocese held 240 different parish meetings called Parish Dialogue Gatherings. In total, tens of thousands of Catholics attended the gatherings and submitted over 11,000 summary documents to the archdiocese. Those documents were then used to create discussion themes for the synod.

As for the topics being discussed at the synod, there is a lot of "room for innovation," according to Vigneron.

Shying away from "programmatic topics" such as young adults, marriage and family life — like discussed at the recent synod in San Diego — Vigneron said the synod will be broken up based on individuals, families, parishes and archdiocesan central services.

"One of the things we said from the beginning is we didn't want this to become a typical strategic planning process because we had the sense that that's too much business as usual," he said. "We think it opens the widest possibility for creative innovation."

Within those four themes, small groups will discuss topics brought up by the Parish Dialogue Gatherings and will be asked to select a topic that "really stands out as where we should start in becoming an evangelizing, missionary archdiocese," Browne said. During the synod, a scribe will be assigned to each table to make sure that every thought is captured and given to Browne to be summarized for the archbishop.

"[The archbishop] really does want to see if there is anything unique or prophetic. He wants that captured, he doesn't want that lost," said Browne.

On June 4, 2017, Vigneron will announce the results of Synod '16 and the concrete measures the archdiocese will begin to undertake.

But for now, both Vigneron and Browne are looking forward to the culmination of years of preparation.

"What I'm looking forward to or hoping is that the energy from our preparations and our regional meetings will continue to be present at the synod," Browne said. "And that it will have an effect on all of us. That we'll really be strengthened in our love for our faith but also just a great joy coming forward in being involved in such a beautiful process and opportunity like this."

"I'm looking forward to spending three days listening and contributing and being part of this whole process," Vigneron added. "I would say just doing the synod is already producing a lot of the fruit we've been looking for. It's galvanizing our Catholic community and moving us ahead to act together as a missionary church."