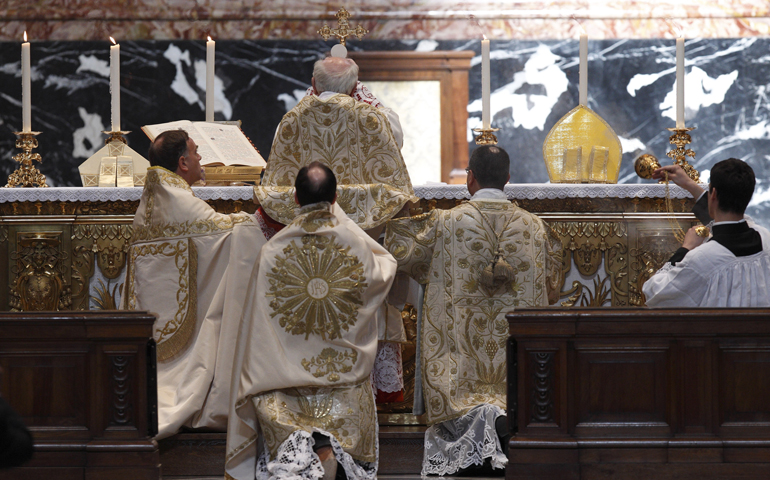 Cardinal Walter Brandmuller elevates the Eucharist during a May 2011 Tridentine-rite Mass at the Altar of the Chair in St. Peter's Basilica at the Vatican. (CNS/Paul Haring)

When Pope Francis first appeared to the crowd in St. Peter's Square without the short red cape known as a mozzetta, some Roman Catholics cried foul, worried the pope's decision to forgo the more formal wear signaled a threat to traditional worship.

Specifically, they fretted over the fate of the old Latin Mass, now in the hands of a papacy that seemed to shrug off pomp and circumstance.

But more than a year into Francis' reign, the Tridentine Mass, as it is sometimes called, appears to be alive and well. Decades after the Catholic church moved away from celebrating Mass in Latin, a throwback movement is growing, in many cases with young people leading the charge.

On Tuesday, four men were ordained to the priesthood at St. Francis de Sales Oratory, the St. Louis church known for practicing the Latin liturgy.

The Mass marked only the second time members of the Institute of Christ the King Sovereign Priest have been ordained in the United States. The religious community, founded in Africa in 1990, regularly celebrates the old-style Mass.

The last set of U.S. ordinations to the institute was in 2007 and involved two deacons. This year's group was larger, with four men welcomed into the priesthood. Four other men were ordained earlier this year in Italy, where the institute is based.

Former St. Louis Archbishop Raymond Burke, one of the more devoted supporters of the old Latin rite among U.S. bishops, came in from Rome to lead the ordinations.

Mary Kraychy of the Coalition in Support of Ecclesia Dei, a nonprofit based in Glenview, Ill., that promotes the Latin Mass, said she's seen a slow but steady rise in the practice, with more than 400 churches offering the liturgy today. The organization sells missals that display the Latin text of the Mass alongside the English translation.

Kraychy described it as a "youth movement," with much of the enthusiasm for the rite espoused by those who are too young to remember the Second Vatican Council. In 1969, Pope Paul VI declared the church should perform Mass in the native language of parishioners, which led to the Tridentine Mass' being largely replaced.

On Tuesday, Francis Altiere, 32, and three other deacons knelt before Burke, holding candles in their right hands. They prostrated themselves before the altar while Burke knelt with his back to the congregation. The cantors sang the Litany of the Saints, praying to Catholic saints, martyrs and angels for divine protection and assistance.

Altiere is originally from Pennsylvania with a degree from Harvard University. He says his decision to become a priest is owed in part to his discovery of the traditional Latin Mass in a church in downtown Boston.

"At this Mass I really understood the priesthood for the first time," Altiere said. "The primary reason for the beauty of our churches and liturgical ceremonies is to give glory to God, but it is also such a powerful means of evangelization."

Those who attend St. Francis de Sales Oratory say their faith is strengthened by the liturgy and by the feeling of solidarity experienced by those who attend the Mass.

"Everybody here believes what they're doing is true, real," said Tom Leith, 55, an engineer in St. Louis. "You're among people who believe what the church teaches."

St. Francis de Sales Oratory loyalists say a combination of pacing and visual cues allow even those with little knowledge of Latin to follow the Mass.

Jim Kahre drives 40 minutes with his nine children from High Ridge to visit the church every Sunday.

"I almost get goose bumps," said Kahre, who works in IT at an accounting firm. "I've never seen anything like it until I came here."

In the 1980s, after the switch to the vernacular, Pope John Paul II allowed priests to celebrate the traditional Latin Mass but only with the consent of local bishops. By 2007, however, Pope Benedict XVI had eased restrictions, giving parishes the authority to celebrate the Mass without obtaining bishops' permissions.

In 2011, Catholics in the English-speaking world were introduced to a new translation of the Mass that is said to more closely align with the original Latin.

Altiere, for his part, said he would use his new gifts as a priest not only to celebrate Mass in Latin but also to save souls.

"There is a saying that the priest does not go to heaven alone," Altiere said. "My goal as a priest is simply to lead as many souls to heaven as possible."

[Lilly Fowler is the religion reporter for the St. Louis Post-Dispatch.]