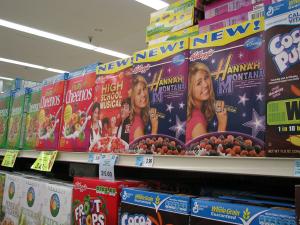 Remember those parenting promises you made before you had children? “I won’t let my kid act up in public” or “I will feed my baby only organic fruits and vegetables” or “I will calmly discipline my child without yelling.”

Mine was: “I will not allow my children to become walking billboards.” No Scooby-Doo T-shirts; no Spider-Man shoes; no Dora the Explorer underpants. That includes Disney diaper bags and Winnie the Pooh shampoo, too.

One day, some seven months into parenthood, after changing my son’s diaper, I realized that blazoned across his little butt was none other than Elmo, the red, furry Muppet of “Tickle Me” fame. How had I missed that his Pampers were already prepping him to be a “Sesame Street” fan?

Apparently children as young as 6 months can recognize logos and brands -- a fact marketers are all too happy to exploit with cradle-to-grave strategies to encourage brand loyalty to their products. But children under 18 are not just future customers, they’re current ones -- spending some $40 million annually and influencing another $700 billion, often by nagging their parents to purchase these cookies or that minivan, according to the Media Education Foundation’s video “Consuming Kids.”

Researchers estimate that children are bombarded with 3,000 commercial messages a day, starting in the morning with their Flintstones Fruity Pebbles served in a Thomas the Tank Engine bowl until evening when they’re tucked under a Little Mermaid comforter clutching an American Girl doll.

What’s wrong with that? After all, my generation had Holly Hobbie and Hot Wheels, and the previous one had Barbie and Superman. But back then it was just dolls and toys, maybe lunchboxes. Today children’s brands are plastered on everything from their Happy Meals to, well, their diapers. And it all sends the message that the most important thing a child can do is buy things. No wonder kids today, when asked what they want to be when they grow up, tend to answer, “Rich.”

Even scarier, they are increasingly getting these commercial messages at school, where they should be learning to be media-literate, not media-saturated. “Drink Coke,” says the cafeteria vending machine. “Eat Skittles,” says the Channel One television commercial. And now, “Watch the WB Network,” says the commercial BusRadio, which has a truly captive audience of kids on their way to and from school.

No wonder America’s soda-chugging, candy-munching, TV-watching young couch potatoes are fatter and even obese, not to mention now suffering from adult-onset diabetes at an earlier and earlier age. But the commercialization of childhood is not just a physical danger to children. It’s an emotional and spiritual one, too.

Youth marketing companies, like Fuse and 4Kids Entertainment, are better versed in child psychology than even the most experienced and best-read parents. These child marketing specialists leverage kids’ natural inclinations to bond to characters and their natural urge to act older than they are -- all to sell products and make money. Does a culture that is willing to deregulate advertising aimed at exploiting children’s developmental differences really care about family values?

Instead, parents are on their own to fight a multimillion-dollar industry. It’s an uphill, countercultural battle that many eventually tire of waging. Too many parents I know who have tried to beat back the onslaught of kids’ consumerism end up throwing up their hands and taking their kids to Disney World and Hannah Montana concerts.

Believe me, I’m as guilty as the next shopper. I’ve purchased Harry Potter and “High School Musical” paraphernalia as Christmas gifts for friends and family. I don’t want to be the uncool godparent. And I have a soft spot for Grover (c’mon -- The Monster at the End of This Book is a classic). But, idealistic new parent that I still am, I hope and pray my husband and I can protect our children from the compulsion to buy things -- and only the coolest and most expensive things at that -- to feel like they are worthy and loved.

Because a habit formed in childhood can last all life long. Parents who don their infants in Baby Gap and purchase only Baby Einstein videos raise toddlers who get the “gimmes” for everything Elmo, who become school-age kids who insist they celebrate their birthday at the (now defunct, thank God!) Club Libby Lu, a makeover salon for “tween” girls as young as 4. Then they become teenagers who wear Abercrombie shirts and Lucky jeans (though they don’t have to wait until adolescence, since Lucky offers baby and toddler jeans for $49-$69).

Eventually they fall in love and decide to marry on a Disney cruise rather than in a church. In a word, they have absorbed the lesson that happiness comes from something outside of themselves, and it ain’t cheap.

Of course, our faith teaches that true happiness comes from something inside, from our relationship with God and others, especially the poor who are too busy trying to survive to celebrate the release of the latest Wii. Our parish communities could and should be a support to parents in teaching this valuable lesson to our children, and many parishes and Catholic schools are. But they can do more. How about raising the topic during baptism or first Communion classes, or at PTA meetings? Maybe offering alternatives to wildly expensive toddler birthday bashes? Or here’s a thought: addressing it from the pulpit now and then.

My son acts up in public all the time, and many of the fruits and veggies he eats are not organic. But I’m going to try to find a new brand of diapers, sans Elmo.

Campaign for a Commercial-Free Childhood
www.commercialexploitation.org

Carry on the work of Jesus, be Jesus in our world

Parish roundup: 'Innkeepers' for the marginalized; a leadership wish list

Deacon: From wildfires come acts of kindness for those trying to recover

Work for change, keep your eyes fixed on Jesus